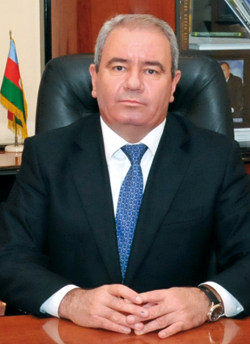 Ali M. Abbasov has had a long career in the field of IT and electronics, which started with a PhD in the field of Microelectronics from the Ukrainian Academy of Sciences. He was the Director of the Institute of Information Technologies of the National Academy of Sciences of the Republic of Azerbaijan from 1991 to 2000, and Rector of Azerbaijan State Economic University from 2000 to 2004. He became Minister in 2004, and also continues as a member of the Strategic Council of the Global Alliance for ICT development since 2008, and recently took on the responsibility as Commissioner of the Broadband Commission for Digital Development.

Share on:
TBY talks to Ali M. Abbasov, Minister of Communications & Information Technologies, on the success and achievements of the ICT sector in 2012 and the initiatives to become a leader in non-oil industries in 2013 and beyond.

What are the Ministry’s plans to capitalize on increasing non-oil FDI that is flowing specifically into the ICT sector?

President Ilham Aliyev declared the ICT sector as a priority field and emphasized that the future of the Azerbaijani economy will be directly related to this field. The transition from Azerbaijan’s historical resource base to the technological and innovative economy is a vital issue. It is a separate part of the policy, which is designed to direct the income gained from natural resources to the long-term development of the non-oil sectors. Moving the ICT sector to the foreground among other fields of the economy is directly bound to the fact that ICT has emerged as the most profitable area in our modern life. Our strategic approach is that the ICT sector should follow the oil and gas sectors in terms of its business environment and profitability. There is a favorable investment environment in Azerbaijan and our country is at the top level in the former Soviet world for the volume of FDI per capita. We are taking certain measures to encourage the stimulation of foreign investments. Our government is financing the most important investment projects in the ICT sector from the state budget. Our goal is not only to create a legal-normative base, but also to strengthen the private sector and its involvement in infrastructure projects. In this regard, we hope that billions of US dollars from private funds will be invested into ICT, and our country will take part in this process together with local companies. It is anticipated that ICT will obtain more investments from the private sector. In order to expand the role of the private sector in ICT at present, specially enhanced material, and a financial and investment environment are being created. A number of important steps have been taken in this field. The establishment of the State Foundation for ICT Development within the Ministry of Communications and Information Technologies is a significant event in order to support manufacture-oriented activity. At the same time, certain steps are being taken to create a favorable investment environment in the country. The modification of fiscal policies and legal bases in the ICT market, the application of customs and tax concessions, the creation of more convenient financial-credit conditions, the provision of a favorable competitive environment for market players, and the protection of investments are important indicators of the policy.

What were the most significant achievements in the local ICT sector in 2012?

The development of the ICT sector in Azerbaijan is proof of socioeconomic growth, which is observed throughout the country. Referring to the statistical figures, I can say that the ICT sector has increased by seven or eight times over the last decade, with an average annual growth rate of 25%-30%. In 2012, the growth rate was 18.2% and the volume of the sector exceeded ‚¬1.5 billion. Approximately 80% of the income falls to the private sector, and it is the result of expedient arrangements carried out regarding the improvement of the business environment and the strengthening of private sector activity. The country now has full telephone penetration and full digitalization of telecommunications and banking services. The Doing Business report in 2013, recently issued by the World Bank and International Financial Corporation, speaks favorably about business and investment in our country. Azerbaijan has taken 67th place among the 185 countries in the report. The first ever Azerbaijan-US ICT Forum was held in 2012, “Risks and Opportunities in the Global Internet Space,” together with the World Economic Forum (Davos), the 47th meeting of the Council of the Heads of the Administrations of RCC, and meetings of the 18th Coordination Council of CIS member states. All these high-level events proved vividly the availability of free internet in Azerbaijan and the realities of the dynamic development of the ICT field in the country. Institutional steps have been taken for the purpose of strengthening the potential of ICT and more widely the free usage of state-of-the-art technology by society. During 2012, the IT Foundation, High Technologies Park, and E-Security Center were established. By order of the President, the creation of the High Technologies Park (technopark) dated November 5, 2012, was an important step within the framework of the creation of Special Innovation Zones. The main mission behind the presidential decree is to carry out important projects such as the creation of resource centers, the development of SMEs, the increase of export opportunities, and the training of ICT specialists, which should fit the philosophy of bridging the scientific and manufacturing fields for the country’s ICT sector. The companies operating there will be provided with tax and customs concessions. Also, the newly created companies will be provided with logistical and technical support. They will be advised by experienced lawyers, financiers, managers, and IT experts, as well as get an opportunity to obtain valuable advice and recommendations. The electronic signature project, which strengthens the development of SMEs in the country, public activity, and the employment of citizens, also gives ample opportunity to fight corruption and provide for government transparency. Today, the provision of e-services for the population is carried out by a single portal. There are 162 out of 417 services that are provided to the population through the “Electronic Government” portal. The number of citizens using electronic services is approximately 10% today. Our target for 2020 is to fully digitalize state services, providing 100% access to e-services. The “Optic to Home” project, which we attach an enormous importance, aims to deliver a fiber-optic network to all settlements in our country.

What challenges does the Ministry face in order to maintain a high growth rate in the ICT sector?

President Ilham Aliyev has always paid ample attention to the development of ICT in Azerbaijan. The first foreign visit made by President Aliyev following the presidential election was the World Summit on the Information Society in 2003, and he noted in his speech that the future development perspectives of the country are connected to ICT. Targets and challenges in connection with the long-term development of the sector were determined by the “National ICT Strategy for the Development of Azerbaijan (2003-2012)” and two other state programs adopted afterward. So far, 70% of the country’s population use the internet, and 50% use high-speed internet in 87% of the populated territories. Computers and notebooks produced in Azerbaijan are exported to other countries in the region. In February 2013, the country’s first telecommunications satellite was launched into orbit. The appropriate e-government infrastructure has been established, the application of e-signatures has started, and electronic services are being provided by most state agencies. We have many targets, such as increasing the access of all settlements to broadband internet, the application of e-services, the creation of technoparks, and the manufacturing of scientific products along with the establishment and development of the space industry.

“The ICT sector should follow the oil and gas sectors in terms of its business environment and profitability.”

What successes can Azerbaijan draw on from having hosted the UN-sponsored Internet Governance Forum (IGF) in 2012?

Firstly, we would like to note that Azerbaijan has closely participated in the process of hosting the 7th IGF since day one. The most significant results of the second phase of the World Summit on the Information Society held in Tunis on November 16-18, 2005 was the establishment of the IGF, which aims to enhance the durability, reliability, security, stability, and development of the internet and to support dialogue between enterprises engaged with complex international political issues regarding its use. The 7th IGF was held under the motto, “Internet Governance for Sustainable Human, Economic, and Social Development.” Wu Hongbo, UN Under-Secretary-General for Economic and Social Affairs (UNDESA), Neelie Kroes, Vice-President of the European Commission responsible for the Digital Agenda for Europe, Fadi Chehadé, President of the ICANN, Hamadoun Touré, Secretary-General of the International Telecommunication Union (ITU), and Philip Verveer, the US Deputy Assistant Secretary of State and the US Coordinator for International Communications and Information Policy all participated in the IGF meeting. Along with them, in general, it encompassed more than 5,000 guests representing 128 countries. Locally, more than 1,200 participants—mostly volunteers—joined from Azerbaijan, as well. The number of participants who joined the IGF online from various countries throughout the world was around 3,000. Government, private sector, civil society, internet amateurs, international organizations, and mass media representatives attended the event and discussed the future growth of the internet and the ICT sector at large.