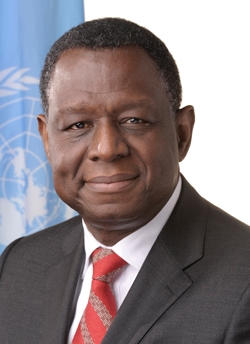 Prior to his work with the UN, Dr. Babatunde Osotimehin was Nigeria’s Minister of Health and Director-General of Nigeria’s National Agency for the Control of AIDS. He obtained qualification as a doctor from the University of Ibadan, Nigeria, in 1972, and also attended the University of Birmingham, England, where he received a Doctorate in medicine in 1979. He was appointed Professor at the University of Ibadan in 1980 and headed the Department of Clinical Pathology before being elected Provost of the College of Medicine in 1990. He has also served in several organizations, including as Chair of the National Action Committee on AIDS from 2002 to 2007. He received the Nigerian national honor of Officer of the Order of the Niger (OON) in December 2005. Dr. Osotimehin became the fourth Executive Director of the United Nations Population Fund (UNFPA) in January 2011. He also holds the rank of Under-Secretary-General of the United Nations.

Share on:
As your second year as Executive Director of UNFPA draws to a close, what initiatives are you most proud of, and what are your most immediate priorities for the second […]

As your second year as Executive Director of UNFPA draws to a close, what initiatives are you most proud of, and what are your most immediate priorities for the second term?

The first half of my tenure as UNFPA’s Executive Director was full of initiatives and activities that promoted the fund’s mandate and mission: to deliver a world where every pregnancy is wanted, every childbirth is safe, and every young person’s potential is fulfilled. To further improve the fund’s accountability, we have developed a new and highly focused business plan, which aligns our vision with our strategic priorities and leads to more transparency while improving our ability to deliver results. This includes a stronger focus on our work in over 150 country offices around the world. We have strengthened their capacity and presence, particularly in dealing with humanitarian emergencies. In addition, we have developed a new communications strategy to better showcase the work UNFPA is doing in developed and developing countries. UNFPA has also reinforced its position as a global thought leader in terms of reproductive health and population issues, with a specific focus on working with young people, who are energetic partners and the future generation that will lead and change our world.

What are the strengths and challenges that differentiate Mozambique within your Sub-Saharan operations?

Mozambique stands as a success story in Africa. It is one of the fastest-growing economies in Africa, and many new investors are coming to the country to explore opportunities. The UN system is also implementing the “Delivering as One” initiative, which UNFPA is part of, in Mozambique. We see a strong donor country presence in the country, which leads to resource mobilization opportunities mainly for reproductive health commodities, adolescents, sexual and reproductive health (SRH), reproductive rights, and activities related to censuses; however, there are also challenges. Although the economy is growing, Mozambique still depends on aid from other countries, especially in the social sector. There are also notable social and regional disparities. Mozambique shares many of the challenges that other countries in Sub-Saharan Africa face: high levels of maternal mortality and a high prevalence of HIV/AIDS, a low coverage of medical doctors, few skilled birth attendants, and weak infrastructure and transportation. In addition, medical doctors, experienced nurses, and health managers are leaving the public sector to join NGOs and private enterprises. Mozambique’s young population offers immense opportunities, but also calls for increased investment to ensure that education, health, and employment reach these young people, and in particular girls, who are often the most vulnerable. UNFPA supports country operations and programs as well as regional policy frameworks, which are aimed at garnering mutual support and commitment to address these critical issues. Mozambique has a number of trade corridors from neighboring countries to its ports and from its growing inland extract industries. This poses additional challenges to the healthcare system and vulnerabilities for its population. UNFPA is working with government and civil society organizations to prioritize interventions for the most vulnerable and at-risk population in these areas.

How do you assess the success of UNFPA’s seventh program of assistance to Mozambique, and what initiatives define the current phase of interaction?

Through its seventh Country Program 2007-2011, UNFPA supported the population and housing census in 2007 and helped improve the availability of population data for planning at the national and provincial levels. Also, we contributed to strengthen policies to improve quality and access to SRH. These efforts are also in line with the national integrated plan to achieve the Millennium Development Goals (MDGs) and the national strategy for family planning. In the area of reproductive health, our support was critical to increase the amount of deliveries attended by skilled health personnel, the coverage of institutional births, and the use of modern contraceptives, from 11% in 2007 to 23% at the end of 2010. In the field of HIV prevention and adolescent SRH, UNFPA’s support has been key. The cross-sector youth program Geraçío Biz, established with UNFPA’s support and with funds from Norway, Denmark, and Sweden, is recognized as a best-practice example in the region. During the seventh Country Program, the number of community peer educators grew significantly, the number of health providers trained to deliver youth-friendly services tripled, and 1.4 million students were reached through school outreach activities. As for the current phase, for the first time in Mozambique, 21 UN organizations developed one action plan to jointly contribute to a set of common outcomes, replacing individual organization action plans and staying in line with the national development plans. Within this program, UNFPA focuses on maternal health and adolescent SRH and has an integrated approach to ensure the complementarity and effectiveness of support to policy development, demand creation, and service delivery at a national level and in selected provinces.

“Mozambique is committed to gender equality, and gender-sensitive legislation is in place.”

How do you rate Mozambique in terms of gender equality and the implementation of gender-sensitive legislation?

Mozambique is committed to gender equality, and gender-sensitive legislation is in place, which is an important first step. The country has made significant progress in the areas of gender equality and women’s empowerment. Some examples are: the government’s creation of the Ministry of Women and Social Action, which set up the National Commission for Women’s Advancement (with provincial and district ramifications), and gender focal points in all ministries. There are also gender focal points in non-governmental organizations, churches, and private enterprises. Key ministries, such as Education, Health, Agriculture, Energy, and Public Service, also have a gender strategy in place. I commend Mozambique for ratifying several legal instruments, such as the UN Convention on the Elimination of All Forms of Discrimination Against Women (CEDAW) in 1993 and the Beijing Platform for Action in 1995. The country signed on to the Millennium Development Goals and the Plan of Action for Poverty Reduction in 2000 and the Southern African Development Community (SADC) Protocol on Gender and Development in 2010. Apart from these international agreements, Mozambique’s constitution refers to gender equality as a must. The country has a gender policy and an implementation strategy. In 2004, Mozambique approved the Family Law and in 2009 approved the Law on Domestic Violence Against Women. The government and civil society are working together to promote gender equality. In this process, they have teamed up with the UN system in the country, of which UNFPA is a key player. Its strategy has been to strengthen the technical capacity of government and civil society for the implementation of the commitments made at international, regional, and national levels in relation to gender issues. The existence of gender-sensitive political frameworks and policies is boosting progress toward equality. Still, gender disparities persist in some areas, and in particular education, economic opportunities, and health. Gender parity in enrollment at the primary school level has been achieved and improved at the secondary school level, but, unfortunately, not all girls complete the full literacy cycle. There is a high rate of child marriage and adolescent pregnancies. As a result, the rate of school dropouts is high. Despite improvements over the last decade, women’s illiteracy in Mozambique continues to be high, and this also impacts access to economic opportunities. Indicators related to women’s SRH also confirm the persistence of gender power inequality in the country. Despite a remarkable commitment to reverse the trend, the fertility rate, especially among adolescents, remains high, and gender-based violence continues to be of concern.

In what specific ways does the UNFPA support Mozambique’s ability to collect and analyze data and develop population projections?

UNFPA recognizes that quality and disaggregated data is critical for development planning, monitoring, and accountability. We do share our successful census experience in Mozambique with other countries, such as Angola and Botswana, through South-South cooperation. UNFPA provides technical support to the National Institute of Statistics (INE) and the Centre for Policy Analysis (CAP) at the Eduardo Mondlane University (UEM) to improve their capacity to collect, analyze, and research data. Additional support is given to the INE to plan and implement the general population and housing census (1997 and 2007); of the $38 million budgeted for the 2007 Population Census, about $26 million was mobilized by UNFPA, representing about 60%. We also organize training courses and develop population projections. UNFPA supports the CAP and UEM in carrying out a Master’s program in population studies. Annually, five scholarships are awarded to students to enroll in master degree courses in population and development.

What is your vision for the role of civil society in the development of Mozambique and Sub-Saharan Africa in general?