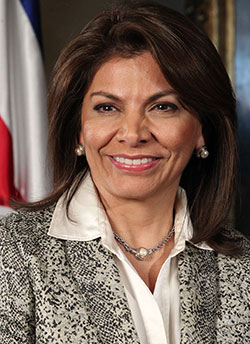 President Laura Chinchilla graduated from the University of Costa Rica and received her Master’s degree in Public Policy from Georgetown University. Prior to entering politics, Chinchilla worked as an NGO consultant in Latin America and Africa, specializing in judicial reform and public security issues. She went on to serve in the José Marí­a Figueres Olsen administration as Vice-Minister for Public Security (1994—1996) and Minister of Public Security (1996—1998). From 2002 to 2006, she served in the National Assembly as a deputy for the province of San José. Chinchilla was one of two vice-presidents elected under the second Arias administration (2006—2010). She resigned from the Vice-Presidency in 2008 in order to prepare her candidacy for the presidency in 2010. In June 2009, she won the Partido Liberación Nacional (PLN) primary with a 15% margin over her nearest rival, and was thus endorsed as the party’s presidential candidate. President Chinchilla is the first woman to become President of Costa Rica.

Share on:
Negotiations for a free trade agreement (FTA) between Colombia and Costa Rica are ongoing. How is the process evolving? We are in the final stages of closing this trade agreement. […]

Negotiations for a free trade agreement (FTA) between Colombia and Costa Rica are ongoing. How is the process evolving?

We are in the final stages of closing this trade agreement. Although Costa Rica inaugurated a tradition of strong inclusion in international markets many years ago and has approved and negotiated several trade agreements, we have never carried out the process with Colombia. We haven’t closed the agreement yet between Costa Rica and Colombia because there are some sensitive areas, and that is why this FTA didn’t come about until now. As with any trade agreement, the benefits include the possibility for consumers to access products from the respective countries at lower tariffs, and hence lower costs. And from the perspective of producers, the opening of new markets is significant. There are some sensitive sectors, especially textiles, but we are positive we are going to be able to close the agreement very soon.

Trade between Costa Rica and Colombia has doubled in the past decade, from $191 million in 2002 to $390 million in 2012. In 2012, Colombia was the second destination for Costa Rican exports in South America. Some of the areas that have more potential for growth are the exports of bullion lead, prosthetic tools, medicines, and pneumatics. In terms of the Colombian presence in Costa Rica, we have seen great diversification in textiles, food, and financial services.

In what other areas are you cooperating, and what have been the major accomplishments in recent years?

I would highlight the area of sea protection in particular. Obviously, we are allies in international forums in favor of measures against climate change. In these areas, Colombia and Costa Rica are on the same side of the table. However, we’ve been focusing our attention on the seas. We are encouraging the strengthening of the Eastern Tropical Pacific Biological Corridor, to which countries like Costa Rica, Panama, Colombia, and Ecuador are subscribed. The idea is to move forward with joint patrolling, maritime surveillance through radar systems, and processes that enable the protection of species that migrate along this corridor. During my administration and that of President Santos, this has been the main emphasis.

What makes Costa Rica an attractive destination for Colombian investment?

The FTA is important because it provides instruments that grant greater legal certainty for investment. This is very important for a Colombian investor, as well as for investors from Costa Rica in Colombia. Beyond the fact that the FTA becomes an additional incentive for Costa Rica, our country already offers very attractive terms for foreign investment. We are one of the most successful countries in Latin America. Our geographical location is very convenient, equidistant from major markets around the world. This has gone hand in hand with the promotion of trade agreements that guarantee access to big markets under privileged conditions. Costa Rica has trade agreements with the US, the EU, and China, for example. The products that are exported from Costa Rica can then access markets under privileged conditions, and that is a very special condition. Also, Costa Rica has always shown conditions of stability and legal security with a recognized rule of law, and that gives a lot of confidence to investors. Another strength is the quality of our human capital, which is competitive and gives added value to the production processes that investors bring to the country.

“Trade between Costa Rica and Colombia has doubled in the past decade.”

How do you envision the future of relations between Costa Rica and Colombia?

I have great optimism not only for our past, which speaks volumes about our friendship, appreciation, and respect, but because of new mechanisms, among them the FTA, which will bring a future of very promising relations.