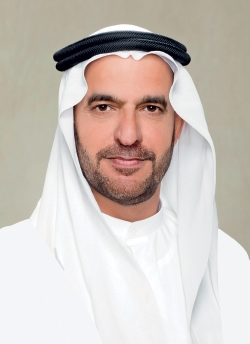 HE Nasser Ahmed Khalifa Alsowaidi is a Member of the Abu Dhabi government’s Executive Council. In addition, he is Chairman of the National Bank of Abu Dhabi, Abu Dhabi Securities Exchange (ADX), Higher Corporation for Specialized Economic Zones, and Etihad Rail, and a Board Member of Mubadala Development Company (MDC). In the past two decades, he has worked for the Abu Dhabi Investment Authority (ADIA) and the Abu Dhabi National Oil Company (ADNOC), and earned a degree in Economics from the California State Polytechnic University in the US.

Share on:
TBY talks to HE Nasser Ahmed Khalifa Alsowaidi, Chairman of ADDED, on five-year plans, trade with the EU, and Abu Dhabi's role as a global business hub.

What are the core points of the Second Five-year Economic Plan drawn up by the Abu Dhabi Department of Economic Development (ADDED) for the Emirate of Abu Dhabi (2013-2017)?

The Five-Year Economic Plan 2013-2017 is the second episode in a series of economic plans aimed at achieving the Vision 2030. We are mandated to articulate these comprehensive plans, and these projects are completed by means of a structured collaborative process led by the ADDED and involving all key public and private stakeholders within the different economic sectors in the Emirate. The process has four key elements. The first is related to developing bottom-up analysis to assess the overall economic impact of activity in the sector. The second is focused on key growth sectors identified by the Economic Vision 2030 as strategic drivers for economic growth. Next is the identification of inconsistencies between the five-year plans and the growth paths proposed in the Vision during this timeframe. Finally, the institutionalization of a formal data sharing and economic policy planning process across Abu Dhabi’s key sectors is necessary.

What areas are prioritized in these plans?

The realization of sustainable economic development, especially in the view of the rapid economic and political changes influencing the structure of the global economy, is a major priority. At the same time, we need to ensure balanced economic development across the three regions of Abu Dhabi by reducing development gaps between them. Strengthening and reinforcing the role of the private sector, particularly SMEs, in Abu Dhabi’s economy, coupled with the provision of the best facilities and services to attract international capital and expertise, are other key elements. We also need to transform our economic sectors toward knowledge-based and sustainable competitive fields; we must empower the appropriate productive linkage among enablers and target sectors to correctly allocate resources. We are undergoing a new phase of development with the strong commitment of the government.

How does the new Abu Dhabi Tasdeer program support export development in the Emirate of Abu Dhabi?

Since 2009, the Foreign Trade and Export Support division has delivered workshops and seminars to increase the export knowledge of Abu Dhabi companies. We work in four areas: tatweer (capabilities), tawjeeh (intelligence), tarweej (connections), and tas’heel (advocacy). We work with the appropriate entities within the UAE to reduce or eliminate barriers to Abu Dhabi exports. The companies participating include state-owned enterprises, the operating units of large corporates, SMEs, and Khalifa Fund companies. Additionally, there are export development executives (EDEs) and Khalifa Fund advisors enrolled. We are excited about this program and its outcomes. This approach is well received by the participants and may become the model for delivery of future structured Export tatweer programs.

How do you anticipate the proposed Schengen visa exception for UAE citizens will affect both the ADDED’s activities abroad and Abu Dhabi’s business footprint in Europe?

Given the sincere desire of top officials in both the EU and the UAE to further enhance ongoing relations and deepen areas of mutual cooperation, the two sides have been capitalizing on emerging opportunities resulting from the sound foundations of energetic partnership and continuous support from leaderships. Traditionally, foreign trade has been a principal area of joint success between the two sides, and recent trade figures show that bilateral trade between the EU and the UAE increased by 7.4% in 2012 to reach ‚¬45.4 billion. In particular, the UAE has attracted total EU exports of approximately ‚¬37 billion, marking our national market as the largest export destination market for the EU’s exports in the GCC market and the Arab world as well. Moreover, in terms of overall major trading partners, the UAE was among the EU’s top 20 trading partners in 2012. In this regard, it is worth mentioning that the two allied partners have recently witnessed a key improvement in their relations, after the European Parliament Committee on Civil Liberties, Justice, and Home Affairs voted in favor of listing the UAE among those nations granted visa-free access to Schengen zone countries. The move is perceived as an important stepping stone toward the further deepening of ongoing relations and diversifying areas of mutual benefit. Cross-border education, tourism, medical treatment, and business travel are expected to gain huge momentum following this move.

How do you assess GCC-EU relations over the last few years?

For more than 20 years the EU-GCC mutual arena has been enjoying one of the most progressive reciprocal relations with tangible achievements. Overall regional trade between the two economic blocs increased from an approximate figure of ‚¬107 billion in 2008 to almost ‚¬144 billion in 2012, achieving an average annual growth rate of 7.7% over the period (2008-2012) compared with an average annual growth rate of 4.6% among EU’s overall trade with the world during the same period. Accordingly, the GCC market is among EU’s top trading partners, with the first reinforcing its leading position among top five export destination markets for EU’s exports in 2012. The UAE’s strategic location coupled with its unrivalled political and economic stability would strongly qualified it to act as an important gateway and vital corridor for mutual trade between Europe and key trade partners in Asia and Africa. Recent achievements have been greatly praised by several business groups as key leverage for global trade and growth as well.

What are some of the key investment opportunities in the Emirate of Abu Dhabi that you would recommend?

Despite the challenging conditions of the global financial system, Abu Dhabi’s long-term road map for sustainable development, the Economic Vision 2030, remains unchanged with the Emirate’s government keen on realizing its long-term goals, whereas Abu Dhabi’s short-term objectives have been reviewed and reassessed effectively to maintain a high level of optimization between our resources and changing national and international realities. In 2012, the government announced a plan to re-energize a considerable list of government-led projects in the tourism, infrastructure, and transportation sectors, as well as the remarkable initiative launched by the government early in 2013, agreeing to pump AED330 billion ($90 billion) into development projects over the next five years, in addition to the latest commitment of more than AED15 billion to further advance the work at a number of key projects related to housing, health, roads, and electricity. Meanwhile, the changing landscape of the regional investment map coupled with its growth potential are significantly endorsing the UAE’s position in general, and Abu Dhabi in particular, as a leading investment hub. Driven by unparalleled political stability matched with a competitive macroeconomic environment and remarkable investor confidence, our national economy has been globally recognized as the second largest destination for FDI flows in the Arab world in 2012, according to UNCTAD statistics. Vision 2030 targets FDI to capture 23% of GDP by 2030, placing investors at the top of our priorities with the prime aim to provide them with a bird’s eye view supported by prestigious world-class services to reap emerging opportunities.