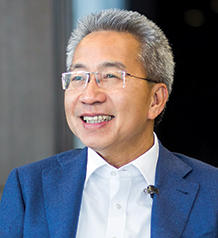 Share on:
TBY talks to Rapee Sucharitakul, Secretary-General of the Securities and Exchange Commission (SEC), on the SEC's establishment, Thai capital markets, and the AEC.

What were the goals behind the establishment of the SEC in 1992?

The establishment of the SEC was a landmark development because it was the first time we had an independent organization exclusively take care of Thailand’s capital markets. The way in which our commission is structured is quite a departure from normal government administrations in the sense that we tried to have a combination of private-sector representatives and government officials on our board. It was with the view that capital markets are dynamic and we need to be able to keep up with all the changes and developments that can come from all sides. Over the years, we have tried to remain close to the private sector to understand the landscape of where we are going and also react to the changing environment throughout this period, both good and bad.

What are some of the biggest challenges in ensuring an efficient and transparent capital market in Thailand?

One of the biggest challenges is promoting effective corporate governance practices in the market. Linking back to the view by many financial analysts that the 1997 financial crisis started in Thailand, the crisis had its roots in the failure of corporate governance, particularly in the financial sector. That is one area in which we are doing plenty of reforms on many fronts. One of the most successful developments has been the creation of the Thai Institute of Directors, which helps develop the professional knowledge and skills necessary for directors of listed companies. It is important to universalize standards and get people to understand what corporate governance is. There have also been many rules, laws, and regulations put in place; for example, the requirements on independent directors, related party transactions, disclosure, and accounting standards. We have come a long way in creating awareness and the practice of corporate governance. Under the ASEAN Corporate Governance Scorecard initiative, for example, last year, out of the top-50 companies that achieved the highest rankings across ASEAN, Thailand had 23 companies there and two were among the top five. It is an achievement we are proud of. Now the key issue is moving from basic corporate governance to issues such as ESG and anti-corruption, which we also play a major part in. We have Anti-corruption Progress Indicators initiative to encourage listed companies to put in place serious anti-corruption measures, and so far we think there has been satisfactory improvement in this area. Another big challenge for Thai capital market deals with the investment side. As types of financial products offered in Thailand are still quite limited, we are working to allow investments in things like hedge funds, high-yield bond funds, and leverage funds, so investors will have greater choice for their investments.

What are the challenges from a regulatory point of view regarding AEC?

The AEC is not yet a single market nor is it aiming to be: It is not the EU. It is more of a loose form of cooperation whereby we try to have more harmonized rules and regulations. But we will not have one set of rules and regulations issued by a central authority that covers everyone. We are not talking about single currencies, visas, or passports. It involves cooperation in trying to promote ourselves as one community to the world rather than a single platform: That is the key difference. However, Thailand’s positioning in the neighboring countries—Laos, Cambodia, Myanmar, and Vietnam—should be noted. Vietnam has already grown at a rapid pace, but for the other three, there are quite a few challenges to tackle for further capital market development. At the same time, all these countries need a great deal of funding as they look to the future. Things like infrastructure funds will likely play a strong role both domestically and regionally. I think this will be one of the key issues for people to keep track of.