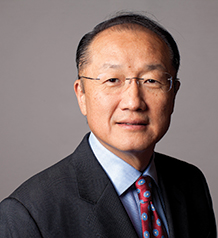 Jim Yong Kim graduated from Brown University in 1982. He earned an MD from Harvard Medical School in 1991 and a PhD in anthropology from Harvard University in 1993. He became the 12th President of the World Bank Group in July 2012. He comes to the bank after serving as President of Dartmouth College. Kim is a co-founder of Partners In Health (PIH) and the former director of the HIV/AIDS Department at the World Health Organization (WHO). He was awarded a MacArthur Fellowship in 2003 and was named one of TIME magazine’s “100 Most Influential People in the World“ in 2006.

Share on:
Jim Yong Kim, President of the World Bank Group, on the assistance the bank is providing to Peru's development.

Peru is a far more prosperous and just society today than a generation ago. Over the past 10 years, Peru’s GDP has increased at an average rate of over 6% each year. During the boom years, strong domestic demand and high commodity prices fueled a decade of robust growth. Growth was inclusive and the size of the middle class became larger than that of the poor. But Peru, like other countries in Latin America, is now feeling the headwinds of a slowing global economy, with lower commodity prices that may stay depressed for some time, and an exodus of capital from developing countries that seems to be accelerating.

The question we ask today is how we can help developing countries grow in the face of slow global growth, the end of the commodities super-cycle, pending interest rate hikes, and capital flight from emerging markets. In tough times, countries that do well have already made the difficult choices. But countries that have not yet still can; it is not too late. Every effort must be made to improve productivity. And in a period when banks are de-risking, we have to ensure that capital is accessible—especially for small business owners and entrepreneurs who will create jobs. More specifically, countries should invest in women, which can be one of the most effective pro-growth strategies by any government. Closing the gender gap can raise incomes by 14% in Latin America and the Caribbean. Government officials also must root out corruption wherever it exists and promote transparency in official business that can prevent future corruption.

Peru’s Minister of Education, Jaime Saavedra, was one of our top macroeconomists at the World Bank before he accepted his current position. As a brilliant economist, Jaime knew that Peru’s future would depend on a more effective educational system. With former-President Humala’s strong leadership, Peru has increased its education budget by 90% and important reforms are under way. Peru has also been a leader in investing in the health and well-being of women and children. It uses results-based financing to reward programs that produced better health, social development, and sanitation outcomes, and it targets assistance to those areas most in need, resulting in rapid progress in rural areas and the poorest communities. Latin America has set a high global standard for ensuring that people avoid poverty, and one of the best programs is Peru’s Programa Juntos, which began a decade ago. Juntos has reached half a million poor families with conditional cash transfers worth USD38 dollars each month, based on regular health and nutrition checkups for young children.

When it comes to insuring people against risks, one of the most frightening threats is climate change. The warmer our planet becomes, the more we will experience droughts, floods, stronger hurricanes and typhoons, and brushfires that consume vast forests. There is in the Pacific right now the El Niño phenomena, which some are predicting to cause more havoc than any Niñicitos in generations. Ocean temperatures off the coast of Peru are as high as 6 degrees Celsius above normal. Led by countries around the world and funding from the multilateral development banks—including the World Bank Group—we are seeing that there is a politically credible pathway toward the USD100 billion promised ahead of the Paris Conference of the Parties. We will significantly scale up our commitments to battling climate change. In Lima, we focused on tough choices that will underpin growth, investment, and safety. Governments now must make tough choices in order to grow their economies in a way that helps the poorest. With every reform we make, with every road we build, with every health clinic we support—there are millions, even billions of people, who only want a chance to live and pursue their dreams. We must do all we can, together, to ensure that every person on this earth can live a more dignified, healthier, and more prosperous life.