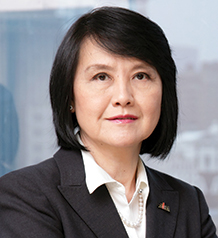 The Land of Potential

Nalinee Ngamsettamas is the CEO and Director of Aira Capital. She has more than 30 years of experience in finance and related fields. Prior to joining Aira group in 2006, she worked as a banker in domestic and foreign banks for more than 10 years. She received her master’s degree in marketing from Thammasat University and Gothenburg University and an MBA in finance from the National Institute of Development Administration (NIDA). She is a member of the Siam Society under Royal Patronage, the NIDA Alumni Association, and the Thai-Chinese Culture and Economy Association and is the Director of Thammasat University Commerce and Accountancy Alumni (TCAA).

Share on:
TBY talks to Nalinee Ngamsettamas, CEO of Aira Capital, on the company's early days, future projects, and advice for investors.

What was behind the creation of Aira Capital?

About 18 years ago, the economic situation in Thailand was quite poor due to the financial crash that hit the region. Aira Capital was born as a financial advisor and later evolved to take over the license for securities. After that, we saw our business was growing from strength to strength. The factoring business in Thailand is interesting, because it goes together with the SME sector; therefore, we purchased a company in this field from Central Group, which is listed on the stock exchange as Aira Factoring. Later, we met with Japanese group AIFUL, and after two years of discussion we formulated a plan to expand into consumer finance, after which we initiated a joint venture. The venture started in November 2014, and now we have opened companies, accounts, and produced new products. One of our new products is called “A Money” and has paid-up capital of THB1 billion.

How has your performance evolved with the introduction of new products?

We always want to know the requirements of our customer in advance so that we can set up products to serve their needs. Staying in Thailand is not easy because there is political and economic uncertainty; hence, we have to learn how to survive by ourselves by managing the crisis. We believe that the situation in our country right now is quite smooth. After the Deputy Prime Minister and the Minister of Finance announced public expenditure for 2016, the future is bright. The cash inflow of the country is moving a great deal at this moment. This is evident in the financial sector. In early 2015, the minister announced this process, and now it is growing and showing a lot of potential. In 2016, with transport projects increasing and other financial or industrial hub developments being launched, the local government is planning a concept similar to China’s “new normal.” It is not necessary to have fast growth, but the fundamentals should be strong.

What would you advise an investor looking to come to Thailand?

One good thing to think is that, even during crises in Thailand, the capital reserves are strong, which means the economy is able to absorb any shock and ensure the stock exchange is stable. We all have something outside the economy; therefore, you will see that the stock exchange of Thailand is still stable. The economy is forecast to grow by around 3% in 2016. This is in line with global GDP growth. We passed the worst-case scenario so we expect the economy should grow now. The bottom line was around 1997, and since then the fundamentals of the economy have changed. At that time, we did not have major infrastructure projects such as the BTS Skytrain or the underground, both in Bangkok. In the past, companies had to pay 30% tax; however, now we pay 20%. There have been major developments in the telecoms sector also, with the bidding for 4G completed in late 2015. Emerging markets such as Thailand have the possibility to achieve the high growth rates we witnessed in the past. For that reason, I would advise investors to look closely at Thailand and explore the sector-wide opportunities.

What are your expectations for the company in 2016?

We have a plan to purchase a joint venture in another three or four businesses. The first one, which is almost complete, is a leasing business. We will start construction in the middle of 2016 in a prime area of Bangkok. We have another company, Aira Property that will manage the project through a joint venture which itself will be listed on the stock exchange. Over the next four years, we have a plan to purchase another four buildings in Thailand. We will purchase existing buildings that have aged about 10 years and have current occupancy averages of 50-60%; we will renovate them over 10-12 months and then rent them out again. With the AEC opening in the beginning of 2016; anyone that wants to invest in Thailand or in the Southeast Asian region will be attracted to Bangkok due to the great inner-city infrastructure and the planned high-speed rail being built. Therefore, if you want to invest in Myanmar, your head office should be in Bangkok. It is possible for Thailand to become the hub for the region. There is a new plan to get all the headquarters of the companies in the region to set up in Bangkok. The government is launching new projects for this, such as tax relief for about eight years if you set up a head office here.