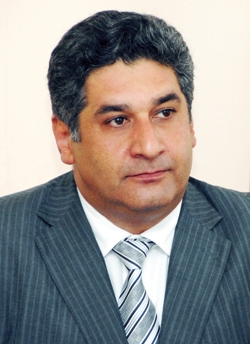 The Game’s the Thing

Azad Rahimov was born in 1964 and is a graduate of the Azerbaijan University of Languages. As well as being the Minister of Youth and Sports, he is also is the Vice-President of the National Olympic Committee. He has also been Chairman of the Youth Organizations Committee under the Cabinet of Ministers as well as the President of the Azerbaijan Dance Sport Federation.

Share on:
How would you evaluate the success of the 2012 Year of Sports? With the decree of Ilham Aliyev, the President of the Republic of Azerbaijan, 2012 was declared the “Year […]

How would you evaluate the success of the 2012 Year of Sports?

With the decree of Ilham Aliyev, the President of the Republic of Azerbaijan, 2012 was declared the “Year of Sports.” In the true sense of the phrase, 2012 really was a year for sport. The achievements of our athletes and the organization of international competitions in our country, as well as the strengthening of material and technical resources, made it a good year for sport in Azerbaijan. Undoubtedly, the greatest success was at the London Olympics. Azerbaijan scored its best medal haul in its Olympic history at the London 2012 games and was also among the top-ranking Muslim countries. Our Olympians won two gold, two silver, and six bronze medals, making the total a record for the country. Azerbaijan was 15th among European countries, third place among Muslim countries, and fifth place in the CIS. In terms of the Turkic states, Azerbaijan ranked second. For the first time, Azerbaijan was represented in six sports with 21 athletes. Azerbaijani Paralympians also won a historic victory at the Paralympic Games. Our team, competing for the first time, won four gold, five silver, and three bronze medals. The team finished 27th among 166 countries and 12th among European countries. There were many individual achievements at the games, including Rovshan Bayramov, who won a silver medal, and Xetaq Qazyumov, who won a bronze medal, thus repeating their results at the Beijing Olympics. Maria Stadnik won a silver medal after much improvement. And Ilham Zakiyev became the owner of a triple Paralympic medal. For the first time in the history of Azerbaijani sports at the London Paralympic Games, our athlete Natali Pronina won one gold and four silver medals in swimming, and with a total of five medals, she made history. Togrul Asgarov won a gold medal at the age of 19 and entered the history books of Azerbaijani sports as the youngest Olympic champion.

Azerbaijan also recently hosted its largest sporting event ever, the FIFA U-17 Women’s World Cup. How successful was the event and how has that paved the way for Azerbaijan to host future international sporting events?

Throughout 2012, Azerbaijan hosted several events. One of these events was the FIFA U-17 Women’s World Cup, held between September 22 and October 13 in Baku and Lankaran. Every year the number of international competitions organized in our country increases. In the coming years, the number and quality of the competitions will improve. We are now looking forward to host the 2015 Chess Olympiad and the 2015 World Chess Cup in Baku. In addition, Baku will host the inaugural European Games in 2015 and the 4th Islamic Solidarity Games in 2017.

A lot of money has been invested in sporting infrastructure projects in regions outside of Baku. What is the philosophy behind the investments?

Over the past 10 years, 35 Olympic sport complexes have been built. They provide a great opportunity for the development of sports in each region. As a result, our youth is growing up healthy and strong and a new generation of athletes is emerging. At the same time, the opening of such complexes in the regions means athletes have the ability to compete at various levels as the country is able to hold more and more events. Currently, a gymnastics complex is under construction in Baku that will allow us to hold various international competitions. We also have the Republic Sport Medical Center, which will provide athletes with all medical services. The construction of the Water Sport Palace has begun in Baku. The creation of sports centers plays an important role in the strengthening of the material-technical base of sports as a whole. In recent years, special attention has also been given to the construction of swimming pools and chess schools. For example, in 2012 several chess schools opened in the regions and began to operate. The Tofiq Bahramov Stadium has also been redeveloped and is now able to host various outdoor sporting events.

“Every year the number of international competitions organized in our country increases.”

With the 2013 Presidential elections coming up, what issues do you think are most important to the electorate?

Young people are the focus of a special government program, and despite the fact that the program was only adopted 16 months ago, a large number of challenges have been overcome. In December 2011, a Youth foundation under the Ministry of Youth and Sports was established by presidential decree. The Foundation began its activities in accordance with modern requirements and using progressive international experience in this field; it is the first organization in the country to conduct all of its activities over the internet. For the first time in Azerbaijan, the Youth Foundation accepts and supports individual applications. In order to support the development of young people, especially in the regions, the network of social service institutions also continues to expand. Currently, there are 15 such centers, and the construction of 15 more have begun. A package of legislative proposals have been prepared in order to protect the interests of young people, such as for housing, employment, support for talented people, and education. The population is over 9 million, of which 31% is in the youth category. Nearly half of the electorate are young people. Opinion polls show that our young people trust and believe in the President of the Republic of Azerbaijan. They believe in the innovative spirit and fair leadership of the President supporting young people, and in turn they take an active participation in the implementation of policies accepted by the President. Azerbaijan’s youth highly appreciates stability and favorable conditions for the development of society and the economy. The Azerbaijani youth support the policies of President Ilham Aliyev. This fact was also confirmed during the last elections. Athletes and young people feel the special care of the state. I believe that they will vote for the continuation of this development direction.

What is the long-term plan of the Ministry in order to ensure the promotion of sports?

At present, we are implementing state programs for the development of football and chess for the upcoming years. This process will continue in the future. In addition, similar programs will be implemented for various kinds of sports. The modernization and expansion of sporting infrastructure will continue into the future. We also aim to create bilateral relations with other countries in order to develop sports programs.

Baku has been chosen to host the first ever European Olympic Games in 2015. How are you preparing for this?

The idea to organize the first European Olympic Games 2015 in Baku and the following decision of the European Olympic Committee created excitement among the Azerbaijani people. We are honored to hold the first ever European Olympic Games in Baku. With the decision, which was made in Rome on December 8, 2012 at the General Assembly of the European Olympic Committee, Europe has entrusted Azerbaijan with hosting such an important event. As you know, the first step in any job always demands much more responsibility. In this way, we are doing our best to organize the games at the highest level, so we will be able to justify the confidence of the people who voted for the candidacy of Baku, and amaze the sporting community with our organizational experience.