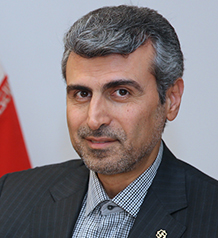 Dr. Bahman Salehi has been the CEO of SUNIR since 2015. After being the adviser to the Minister of Culture and Islamic Guidance, he was the Deputy Minister for Planning and Cooperation between 1982 and 1985. In 1984, he was appointed as Vice-president of the Institute of Standard and Industrial Research of Iran. Holding a Doctorate in Commercial Management, he teaches in different Iranian universities and is member of Iran-China Friendship Association.

Share on:
What is Iran’s potential for becoming an energy hub for the region? The Middle East is an important region for energy in the world. Especially in Iran, due to its […]

What is Iran’s potential for becoming an energy hub for the region?

The Middle East is an important region for energy in the world. Especially in Iran, due to its stability throughout history and even now, we are a great source of energy, even to produce and distribute to the region. With improving technology, it is easy for Iran to trade with electricity, either to the Far East or the Far West. Instead of selling crude energy like oil and gas, we can transfer it to electricity and distribute it to foreign countries. In this recent age, one of the safest investments in the world is investing in energy, especially in electricity, which could have lots of added value for the countries. We want the world to look at this point and understand the ability of the Iranian economy and the political stability of the country as well. We now have 75,000MW production of electricity from installed power plants, whereas our neighboring countries do not have more than 25,000MW capacity. We can create a network to distribute electricity even to CIS and some European countries.

What kind of products and services does SUNIR offer?

SUNIR is planning to produce 100,000MW from renewable resources for exporting and trading. We have seven fields of activities, exporting industrial and engineering services, trading with electricity, and financing projects within Iran. One is producing power plants, combined cycles, dams, solar, and wind farms. The second is electricity transmission and sub-stations. The third is creating the distribution network in villages and urban and industrial complexes. We also build petrochemical plants and refineries, as well as water sewage plants and pipelines. Finally, we also operate in the construction and mining sectors.

What capabilities does Iran have to make it a world leader in the engineering services sector?

All of the countries in the world, in order to improve economy and progress, should reach the position that Iran has in this sector. We implemented policies 20 years ago that have made us better every year. Our vision for 2021 is to be an energy hub. We should be the best energy source for the Middle East and distribute to the other market targets, like Europe, North America, China, and India. We have two options: produce energy and export, or exchange crude oil and gas energy by electricity. Electricity can be transmitted and traded easily, whereas oil and gas need more assets for transporting, and SUNIR has great capabilities to transmit electricity.

We had USD25 billion in negotiations this year, except for our megaprojects, of which USD7.8 billion are under agreements. We hope to reach an agreement around USD5 billion before the end of this year. Recently, we had a meeting with the President of Kazakhstan, who offered us one package of around USD800 million to build two out of the 27 wind farms they want to establish, and we are now studying the project. For civil section, we are now studying a 1,200km road construction in the east of the Caspian Sea and 300km of mining. With these projects, we can easily reach USD800 million in two or three months. In Armenia, we have a large transmission line under construction, which will connect the Georgian and Russian network to Iran. In the meantime, we are negotiating to make a joint network with Turkmenistan. In the Persian Gulf, we have three projects, two in Oman for transmission lines and another sub-marine transmission line from Iran to the UAE. When we operate in any country, we produce electricity for them or repair their network, such as Oman, where we have produced a pipeline for sewage and made a road. Therefore, we can work in any country, as SUNIR wants to be considered a symbol of welfare and peace.