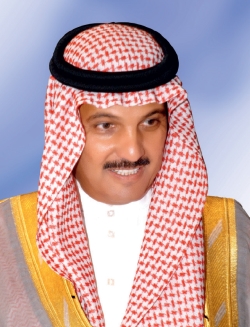 The Focus Is Here

Abdul Rahman S. Al-Otaishan is the Chairman of Asharqia Chamber. He has 33 years of experience in the management of maintenance, construction, and transport projects, and sits on many councils and committees covering numerous economic sectors. He has a degree in Business Administration that he received while studying in the US, and is a certified member of the North Arabian Gulf Chapter of the International Association of Drilling Contractors.

Share on:
How does the Asharqia Chamber seek to promote strong economic growth locally? Asharqia Chamber, the Eastern Province Chamber of Commerce and Industry, was established in 1952. Since then, it has […]

How does the Asharqia Chamber seek to promote strong economic growth locally?

Asharqia Chamber, the Eastern Province Chamber of Commerce and Industry, was established in 1952. Since then, it has played a vital role in the development of local trade and industry in line with the Kingdom’s sustainable economic growth. To help achieve the country’s projected growth rate, Asharqia Chamber has expanded its services and facilities by leaps and bounds, which resulted in the increase of its membership to over 54,000. Asharqia Chamber has played a pivotal role in the country’s economic transformation since the majority of the Kingdom’s oil-based industrial activities are located in Eastern Province. This new economic era in Saudi Arabia began with the discovery of crude oil in Dammam in the 1930s. Since then, the development of the oil sector has had multiple effects on the economy, leading to the growth of local industries, construction companies, trade and commerce, and the services sector. Eastern Province has become an important region of the Kingdom, contributing over 60% of GDP to the national economy. With its massive growth of industries, Eastern Province is now called the “Industrial Capital of the Gulf.” Eastern Province is also contributing significantly to the Kingdom’s drive to diversify its income away from oil. Most of the manufacturing industries, such as petrochemicals, chemicals, steel, aluminum, plastics, and foodstuffs, are located in the region. Asharqia Chamber has been providing vital support for the enormous industrial growth in this region, and we are committed to continuing our seamless services for the sustainable, long-term economic growth of the country.

International cooperation is essential to a robust economy in a globalizing world. What is the Chamber’s role in promoting international trade with Saudi Arabia?

Asharqia Chamber has been playing a key role in bringing the latest technology and know-how to the Kingdom from outside the country for the development of local industries. Every year, the Chamber hosts many foreign trade delegations, opening up platforms to establish business contacts between local and overseas companies. In 2013, the Chamber received a total of 16 foreign trade missions from major industrialized countries such as the US, the UK, Japan, Germany, Canada, France, Greece, and South Africa. In 2014, we have concentrated on expanding international cooperation, which has led to 11 foreign trade missions visiting the Chamber in 1Q2014 alone. In addition, the Chamber organizes a number of catalogue exhibitions of foreign companies at its premises, which proved to be an easy and effective medium for bringing together local and overseas companies. The Chamber also organizes many seminars, workshops, lecture sessions, and conferences throughout the year with the objective of introducing trade and investment opportunities for local as well as foreign businessmen.

Bringing Saudi women into the workforce is one of the nation’s goals. How does the Chamber work to advance this goal?

The Saudi government has given priority to women’s participation in nation-building activities, and Asharqia Chamber has been working to advance this goal. We have set up a separate entity, namely the Women’s Business Center (WBC), aimed at providing all kinds of membership services to our female members. In addition to providing regular services, the WBC has launched a unique idea—an Entrepreneurship Development Program—to identify trade and investment facilities as well as employment opportunities for women. The program helps women develop new products and services, and subsequently provides adequate support to introduce these products in both the local and international marketplace. The WBC also organizes training courses, meetings, seminars, and symposia exclusively designed for women to discuss the latest developments in trade and business, new laws, and the rules and regulations formulated by the government. The Chamber has also established a Women’s Affairs Committee (WAC) with a view to dealing with problems faced by the Chamber’s female members.