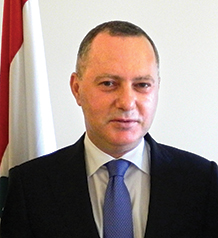 HE Raymond Araygi was born in Zgharta on the July 31, 1965. He graduated in private law from the University of Saint Joseph in Beirut, and received the Lebanese Baccalaureate in mathematics from Freres – Zgharta. In 1990, he joined the Beirut Bar Association, and then continued to practice his legal profession at his private office. He served as an adviser to Minister Suleiman Franjieh in several ministries: the Ministry of Public Health (1996-98 and 2000-04), the Ministry of Agriculture (1998-2000), and the Ministry of Interior and Municipalities (2004-2005). He is a founding member of the Marada and politburo and member and coordinator of external relations for Marada Movement.

Share on:
TBY talks to HE Raymond Araygi, Minister of Culture, on the country's vibrant arts and cinema scene, and the various cultural initiatives launched by the ministry to promote Lebanon's heritage.

What mechanisms have been activated by the Ministry to protect and preserve Lebanon’s cultural heritage?

In Lebanon, there are two types of cultural heritage: tangible and intangible. Tangible cultural heritage refers to archaeological sites and patrimonial buildings. On that level, the ministry is taking all the necessary measures to maintain and preserve these sites while closely cooperating with the UNESCO. As for the intangible, we succeeded to enroll Zajal, a traditional poetry form, on the UNESCO Intangible Cultural Heritage List which would protect this form of traditional art. All in all, the ministry has adopted a policy to develop and promote Lebanese culture and arts through a variety of events while submitting drafts of bills and legislations for that same purpose.

What measures does the ministry implement to create synergies between culture and education, and other areas in the economy?

Arts in Lebanon are well developed, the Lebanese movie industry is booming, while Beirut increasingly hosts cultural events. Artistic and cultural festivals have abounded this summer and have spread out across Lebanon. Archaeological sites and museums have received a significant number of visitors. All these cultural and artistic undertakings have contributed to the Lebanese economy. The Ministry of Culture has worked to financially support cinema. In addition to that, Lebanon’s publishing industry is one of the most developed and active in the region, especially in the field of children’s books. These books are widely distributed across Arab countries. They are published in Arabic, French, and English, and Lebanon hosts the French book fair, an impressive step for a small country like ours.

What major cultural and tourist initiatives can be expected to take place in Lebanon in 2015-16?

One of our major events was launched just recently—a virtual museum of contemporary art. We launched the virtual museum to exhibit the Ministry of Culture’s collection of paintings. The ministry owns around 1,500 paintings of famous Lebanese painters, and the virtual museum is a retrospective of contemporary Lebanese art with commentaries in four languages; these multi-lingual texts aim at drawing the Lebanese diaspora together and keeping it involved in Lebanese culture. It is designed to first promote our culture, second to attract tourists, and third to enhance relations with the Lebanese diaspora. Language, the arts, and archeology can all contribute to tying closer bonds between Lebanon and the Lebanese diaspora. In order to further promote and display our historical heritage, the Ministry of Culture launched a small museum, a permanent exhibition with many valuable artifacts- at the Cedar lounge (MEA) of the Rafic Hariri International airport. The Ministry is currently working on extending this exhibition to the whole airport. On the other hand, the Ministry has also launched a national prize in Arabic literature for the best and most imaginative prose work of the year in Lebanon. Add to that that the Ministry is collaborating with a consultancy Company in order to launch a roadmap to cover the next decade for Culture in Lebanon. Sponsoring several cultural activities in different fields taking place in the country (cinema, literature…) is another of the Ministry’s initiatives. In 2016, the Ministry will undertake the project of refurbishing the typical Byblos House and turn it into a museum.

Looking forward to 2016, what are your biggest aspirations, as the Minister of Culture?

As I told you, we are working on a road map for the Ministry of Culture for the next decade. The Ministry is collaborating with professionals—one is a consultancy company, and the other is a cultural association. All these stakeholders are deploying efforts to present our vision to the Lebanese government along with specific projects.