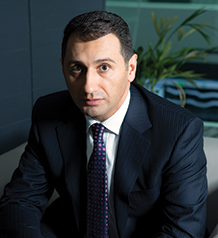 CEO & Chairman of the Board, Azercosmos

Rashad Nabiyev was born in 1977 and was appointed as Chairman of the Board of Azercosmos on January 24th, 2011 by order of the President. Before his appointment, he was Head of the Finance, Accounting, and Economic Analysis Department at the Ministry of Communications and Information Technologies. He holds a Master’s degree in Economics from Eastern Carolina University and also a Master’s degree in Public Administration from the Academy of Public Administration under the President of the Republic of Azerbaijan. He continued his education at the Kennedy School of Government at Harvard University, where he completed the program for Senior Executives in Public Financial Management in 2006.

Share on:
TBY talks to Rashad Nabiyev, CEO & Chairman of the Board of Azercosmos, on the company's training program, Azerspace-1, and future launches.

What sort of training programs does Azercosmos use?

There are different types. During the first phase of operations, we were sending our employees abroad to receive theoretical and practical training either at universities, manufacturing sites, or the premises of existing satellite operators. Now, those employees transfer their knowledge to the next generation of engineers via in-home training, which is sustainable for us. An example of how efficient our training has been is that we have recently promoted two satellite operators, who had never passed through any overseas training in the past, to the position of satellite engineers. Over the last four years, we have sent one engineer to study his Master’s in the UK. He has returned; and we currently have an additional two in the UK studying satellite engineering. Although it provides us with some challenges in our day-to-day work, we want them to develop continuously. Alongside developing technical skills of our employees, we also focus on the advancement of their soft skills, such as leadership, communication, presentation, negotiation, project management skills, and business ethics, for example.

Azerspace-1 now covers a range of areas across the world. What is the potential for Azercosmos to reach its increase?

After two years of real operations, it is clear that in order to be competitive in this industry we have to have better coverage across different regions. Azerspace-1 provides Ku-band coverage over most of Central Asia, Central and Eastern Europe, and C-band coverage over the same regions as well as over Africa. Azerspace-2 will offer enhanced Ku-band coverage over the same regions and expand into Africa to meet customers’ demands we are seeing there. We are interested in the Indian Ocean, and our second satellite will provide perfect coverage of that region as well. Most important, Azerspace-2 will enable us to provide improved business continuity and assurance with added back-up capacity for Azerspace-1.

Azerspace-2 is set to launch in 2017. At what stage is its development currently?

We cooperate with one of the largest satellite operators in the world, Intelsat, and will be working on their orbital slot for a long time, which is at 45 degrees east. We will launch Azerspace-2 to that orbital slot. In March 2015, we have announced open tender for the procurement of the second telecommunication satellite and the related equipment. We are planning to finalize contractual negotiations by the end of June 2015, which will put us in the position to launch in 2017.

In December 2014, there was a signing with a French company, Airbus Defence and Space. What was the significance of that?

Alongside diversifying our geographical presence around the world with a telecommunication satellite, we are also working toward diversifying our portfolio. In 2014, we entered into the commercial business of Earth observation services. We signed a strategic cooperation agreement with Airbus Defence and Space and took over the rights to operate and commercialize Azersky, an optical Earth observation satellite. This direction is new for our business, and the cooperation that we put together with Airbus Defence and Space is long term. It is aimed at efficiency as it already has Spot 6 satellite as well as Azersky operated in a constellation mode. We still kept it as a part of that constellation because of an excellent customer base that was acquired by Airbus over the past 25 years. We have a local demand for such images in different areas, including but not limited to defense and security, emergency response, exploration of natural resources, maritime surveillance, sea faring, environmental protection, urban planning, cartography, agriculture, and tourism. We could actually have taken the path of buying images from that satellite; however, that comes with limited sovereignty over the territories and frequencies.