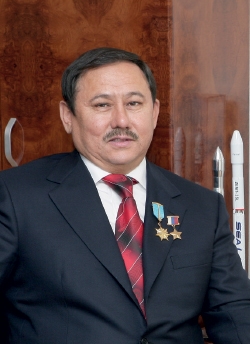 The Complexity of Space

Talgat A. Mussabayev graduated from Riga Civil Aviation Engineers Institute in 1974, before attending the Aktyubinsk High Flying Academy of Civil Aviation with a Pilot Engineering diploma. He also graduated from the Russian State Scientific Research Test Center of Astronaut Training and qualified as a cosmonaut. Between July 1 and November 4, 1994, he went on his first spaceflight as a flight engineer of the main expedition EO-16 on the Soyuz TM-19 to the Mir orbital complex. He completed two spacewalks in open space with a total duration of 11 hours and 7 minutes. He went into space two more times in 1998 and 2001. Mussabayev is currently the Chairman of the Kazakhstan Space Agency (Kazcosmos).

Share on:
TBY talks to Talgat A. Mussabayev, Chairman of the Kazakhstan Space Agency (Kazcosmos), on the role of the agency, KazSat, and working with its CIS partners.

Does the Kazakhstan Space Agency (Kazcosmos) seek to create a robust space industry in Kazakhstan, and how will Kazcosmos achieve this goal?

Kazcosmos was established a relatively short time ago, in March 2007, by a Decree of the President of Kazakhstan Nursultan Nazarbayev. Compared to the US, Russia, and China, which have been working on their space programs for at least 50-60 years, we have had a limited time to set up fully fledged, space-technology infrastructure. Therefore, Kazcosmos made use of its international partners and their extensive global experience. As a result of cooperation with foreign countries and some of the world’s most established organizations, such as Airbus Defense and Space and SSTL, Kazakhstan has an almost fully developed space industry at its disposal. The realization of this scheme in Kazakhstan was carried out by the creation of the National Space Center (NSC) in Astana—a high-tech complex for the provision of favorable conditions for the establishment of a space industry in Kazakhstan that is competitive in the international market. The NSC occupies an area of 30 hectares and is located in a free economic zone called Astana-New City. In order to create NSC’s manufacturing sites, work is currently underway on the practical realization of the projects on the creation of assembly, integration, and testing complex of spacecraft, earth remote sensing space system (ERS SS), and high-accuracy satellite navigation system for Kazakhstan. Therefore, the creation of an ERS SS project, which will provide services in satellite images, is being established by Kazcosmos together with our strategic partner Airbus Defence and Space. As a result of the realization of the project, two ERS SS (high and medium resolutions), a ground dedicated complex, and a ground control complex for the ERS SS will be created.

Today, the assembly and testing of ERS SS with high and medium resolutions have been completed and the ground complexes are prepared. Work on the organization of ERS SS launches is being carried out, with a scheduled completion date of 2Q2014. In addition, Kazcosmos is taking measures to provide training to its own staff. Over the last two-and-a-half years of developing Kazakhstan’s ERS SS, we have trained specialists in the UK and France, and as a result a group of local engineers and operators have been trained. An assembly, integration, and testing complex of spacecraft (AITCS) is being created together with our French partner Airbus Defence and Space. As a result of the project, a high-tech enterprise for the design, assembly, and testing of spacecraft components of the payload and elements of space techniques will be created. Besides industrial building, AITCS in its composition will include a Special Design and Technology Bureau (SDTB) for space technologies, laboratories, and production sites to manufacture certain spacecraft components. Currently in the framework of this project, the design and manufacture stages of technological equipment for all test facilities have been completed, with the delivery of parts and technological equipment details underway. AITCS buildings and the SDTB of space technologies has launched pilot production. The term of commissioning these objects is planned for 2015. We have also started the implementation of another important project, which is the creation of ground infrastructure and a high-accuracy satellite navigation system for Kazakhstan. The realization of this project will provide guaranteed quality of coordinate time and navigation services for the users of global navigation satellite systems on the territory of the Republic of Kazakhstan. Currently, a sea-based differential station has been created and put into permanent commission. A differential correction and monitoring center was put into operation, and its pilot production was conducted. Some 50 prototypes of differential stations of local production were manufactured, which are now located on the territory of Kazakhstan.

Taking into account the vast territory of Kazakhstan, the establishment of the national system of satellite communication and broadcasting satellite, KazSat, is another strategically important project, as it will effectively solve the problems of communication and broadcasting over the whole territory of the country and meet the needs of Kazakhstan’s market for television broadcasting, fixed communications, internet, and data transmission. Entering service in November 2011, the KazSat-2 satellite is operating in a normal mode. Moreover, we actively worked on KazSat-3. Its capacity significantly exceeds that of KazSat-2, and it was launched in April 2014. The KazSat communication and broadcasting satellite system project is directed not only to the development of the orbital constellation of spacecraft, but also for the development of the ground segment. Thus, the control of KazSat-2 is provided by Kazakhstani specialists. In 2005, in the town of Akkol in the Akmola region, a modern ground-based complex for controlling satellites, was established and is currently successfully operating and servicing our space efforts. In June 2013, in the Iliy district of the Almaty region, a new back-up, ground-based complex for controlling satellites was introduced. We have large-scale plans, and in 2014 we aim to provide telecommunications services to other CIS countries, including Kyrgyzstan, Uzbekistan, Tajikistan, and Russia. As is well known, the space industry cannot be competitive or develop without having a serious scientific and technological base.

You have often expressed your opinion in favor of Russian participation in the Baikonur Cosmodrome. How do you foresee this partnership in the future?

Cooperation with the Russian Federation in the field of space has an important meaning for the Republic of Kazakhstan, and represents great opportunities for the development of its own space industry, as far as the Russian Federation is the main strategic partner of Kazakhstan. The Baikonur Cosmodrome is Kazakhstan’s unique opportunity to attend manufacturing works with the accumulation of experience in the area of training, maintenance, and launches of spacecraft. This feature is currently implemented through joint Kazakhstani-Russian work on the project of making Baikonur an ecologically friendly space rocket complex. The presidents of Kazakhstan and Russia, having signed (on January 9, 2004) the interstate agreement on cooperation for the effective use of the Baikonur complex, extended the term of the complex lease up to 2050 and agreed that the environmental problems of the cosmodrome will be solved through the establishment of new environmentally safe space systems (in particular, the Baiterek complex) and the phased reduction of launches of rockets using highly toxic fuels, such as heptyl and amyl. In accordance with the interstate agreement in December 2004, the intergovernmental agreement on the creation of the Baikonur Cosmodrome and the Baiterek space rocket complex was concluded. The governments of Russia and Kazakhstan have now approved a joint plan of action on the realization of the project and the creation of the Baiterek complex on the basis of using the Zenith carrier-rocket. Under the new conditions, the Baikonur Cosmodrome may be a catalyst for the integration of CIS countries and bring Kazakhstan-Russia bilateral relations in the space sector to a qualitative new level. In general, I would like to note that the project enables Kazakhstan and Russia to create new relationships on the Baikonur complex and to build a new scheme of cooperation, implementing and solving state problems through the effective use of the facilities.