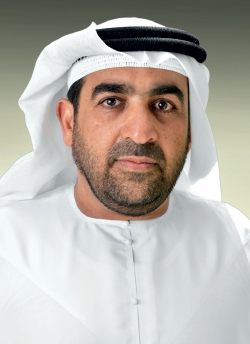 The Color of Clean

HE Dr. Rashid Ahmed Mohammed Bin Fahad is the UAE Minister of Environment & Water. In addition to his ministerial position, he has held the position of Chairman of the Emirates Standards Authority since 2008. He holds a PhD in Civil Engineering from the University of Strathcylde, Scotland.

How does the UAE’s Green Economy Initiative encourage economic growth?

The Emirates Green Development Strategy launched by HH Sheikh Mohammed Bin Rashid Al Maktoum, Vice-President and Prime Minister of the UAE, and Ruler of Dubai, in January 2012, seeks to achieve economic objectives with the target of community development by creating job opportunities through the development of sustainable growth. This strategy will enhance the competitiveness of the state economy, reduce financial burdens on the government, and enhance the state’s image as a leading investment destination by attracting green investments, enhancing economic diversification, and establishing new innovation- and technology-based projects and industries. All this, in turn, should make the UAE a global center for the export and re-export of green products and technologies.

How have local businesses responded to the Environmental Performance Card (EPC) program, and what dividends has it reaped for the country?

The EPC was granted to 10 industrial businesses in 2009, 25 in 2010, 37 in 2011, and 55 in 2012, while the Ministry targeted about 70 businesses nationwide in 2013. The response from industry has generally been good, backed by the cooperation of competent local authorities. The initiative will encourage industrial businesses to compete in compliance with environmental initiatives to conserve the environment and maintain sustainable development to the advantage of the nation in general; especially given the UAE government adopts the green economy approach as well.

What ministerial policies contributed to the UAE receiving an improved performance rating, as well as the best ranking of any GCC country in Yale University’s 2012 Environmental Performance Index (EPI)?

The Ministry of Environment and Water (MOEW) adopted the Strategic Plan 2011-2013 for the improvement of the country’s EPI listing as a part of the objective to enhance environmental security, which is one of the five strategic objectives of the Ministry. In this regard, it has laid down a set of initiatives and plans with a view to improving the national position in this index, such as improving the level of protection of biological zones and fragile environments, the application of the integrated management of desertification, and improving the ecological footprint index, among others.

What is the UAE’s plan for handling long-term water stress, given projections of sustained population growth here (especially in Abu Dhabi) and rising water scarcity across the Middle East?

The management of water resources, especially the provision of fresh water and the services related to potable water, is a matter of international priority that has a growing importance in the light of increasing pressures and challenges to water resources worldwide, such as the increasing demand on water and the challenges of waste, depletion, and pollution. These pressures are aggravated with the impact of climate change on water resources. In the UAE, the water issue has always been paid particular attention since the beginning of the comprehensive development of the country in the early 1970s. As far as future planning of water resources is concerned, the UAE seeks to ensure the sustainability of its water security by integrating the management of the available limited natural water resources and non-traditional water. This includes the sustainability of the strategic industry of seawater desalination as a source of fresh water by focusing on modern desalination technologies, the use of sources of renewable and alternative energies, and the sound environmental management of water from desalination stations. In this respect, a reference can be made to the national strategy on the conservation of water resources, which is a 10-year strategy and adopts the drivers and policies of demand managed by rationing the use and conservation of water in all sectors, prepared by the Ministry in 2010 and approved by the Cabinet. We also have legislation prohibiting the export of water filled from groundwater sources. The Ministry’s current operating plan approves a strategic indicator concerned with cutting demand for groundwater, which is being implemented in coordination with the Ministry’s partner agencies through developing agricultural policies that target cutting water consumption in the agriculture sector, which is the main consumer of groundwater in the UAE.

How does MOEW contribute to the development of agriculture and aquaculture and work toward improving sustainable food security in the UAE?

We are aware of the importance of our marine wealth. In addition to its economic and social importance, it also contributes to enhancing food security, as well as helping people to earn a living in the community segments working in fishing and related occupations. Fish farming in the UAE will grow over the coming years, especially upon the completion of the Khalifa Bin Zayed Center for Marine Research. The productivity of the Center will rise from 200,000 fish fingerlings currently to about 10 million in addition to the development of operations in the field of scientific research and studies of fish wealth. Additionally, the Ministry seeks to motivate more private-sector institutions to invest in this promising industry, which is the world’s fastest growing sector of animal food production in terms of security. In regard to agriculture, we have established guidance units and veterinary clinics with technical cadres to cover all parts of the country and to serve farmers and animal breeders free of charge. Thanks to these efforts, the number of farms rose from 4,000 in the early 1970s to 40,574 in 2011, and cultivated area jumped from 3,000 hectares in 1968 to 115,150 hectares in 2011, while agricultural production reached 2.1 million tons in 2010. The farmers are supported annually with agricultural production supplies for 50% of the cost price to encourage agricultural production and enhance food safety. This system had reached about 700 protected houses for aquatic agricultural systems over an area of 191,000 sqm by the end of 2012, compared to only 10 locations in 2009. This is thanks to the MOEW’s effort to introduce aquatic agriculture technology into the sector. What’s more, MOEW has adopted initiatives to contribute to agriculture development, such as the palm initiative. Livestock is also an important issue, and the MOEW works through its 21 veterinary clinics and 60 veterinaries covering all parts of the country to provide treatment, vaccines, and guidance free of charge to animal breeders in order to protect local wealth from disease and enhance its contribution to local production. Regarding food safety, since 80% of the state’s foodstuff is imported, the MOEW considers food safety the key priority with a view to circulating sound consumable food products by issuing legislation and resolutions regulating food safety. These include resolutions on control over agricultural and veterinary quarantine points, import prohibition or prohibition lifting resolutions, resolutions regulating animal production farms, and regarding unified work guidelines, including the uniform guide to food prohibition and prohibition lifting procedures. In addition, a federal law on food safety is currently under development.

How does the UAE hosting a number of international events related to clean energy, sustainability, and the environment contribute to the country’s development?

By hosting international conferences and gatherings on the environment, sustainable development, and energy, we reinforce our commitment to participate actively in international endeavors to address the causes of environmental problems and find sustainable solutions to them. The UAE has been approved as a regional and international platform to discuss the main issues nationally, regionally, and internationally. It also highlights the attention of the wise leadership to the issues of the environment, energy, and sustainable development. The contribution of these international conferences and gatherings in enhancing the efforts of sustainable development in the UAE mainly comes in the form of gathering an elite body of leading policy and decision makers, as well as competent officials, in both the public and private sectors. This opens the door to important opportunities for building partnerships, exchanging experiences and perspectives, as well as assessing and building state-of-the-art systems, technologies, and practices; for example, the Abu Dhabi Sustainability Week, Dubai Global Energy Forum, and Abu Dhabi-headquartered International Renewable Energy Agency (IRENA).