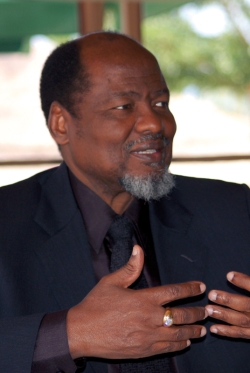 The Birth of a Nation

Joaquim Alberto Chissano was born in Malehice, Mozambique, on October 22, 1939. Chissano played a fundamental role in the 1974 negotiations for the independence of Mozambique, between FRELIMO and the Portuguese government, taking office as Prime Minister of the transitional government. Currently, he is the Chairperson of the Joaquim Chissano Foundation and of the Africa Forum of Former African Heads of State and Government. Chissano is member of the board of a number of international institutions, including the Club of Madrid, the Hunger Project, International Crisis Group, Peace Parks Foundation, Goodwill Ambassador for Community of Portuguese Speaking Countries, and Youth Ambassador of the Global Partnership Initiative. He is also member of the Advisors Council of the World Food Prize Foundation.

Share on:
How has Mozambique progressed since it gained independence in 1975? When the ceasefire between the Liberation Front of Mozambique (FRELIMO) and Portugal was signed on September 7, 1974, the country […]

How has Mozambique progressed since it gained independence in 1975?

When the ceasefire between the Liberation Front of Mozambique (FRELIMO) and Portugal was signed on September 7, 1974, the country was very backward due to the negative effects of Portuguese colonization. The Mozambican people were uneducated and suffered from an economy that was geared toward the prosperity of Portugal. Of course, due to the struggles that we were waging against colonialism, the Portuguese government tried to make some cosmetic changes. The education sector was comparatively strong; however, health services did not benefit the majority of the population. There were some parts of the country where there were only one or two doctors per 1 million people. The first university was created in 1962, but it was very small. In 1974, it had about 4,000 students. Another example was that people didn’t participate in political activities. There was no political life for the Mozambicans here. Elections were known only to a fraction of Portuguese people because, at that time, even Portugal itself was under a dictatorship. After Mozambique proclaimed its independence, things changed very quickly from 1975 to 1982. Attendance at educational institutions tripled. In the 1980s, African nations recognized Mozambique as a model. It was a progression from darkness to the light in terms of having access to education. During this time, Mozambicans began to gain an understanding of politics. It was an era of democratic development. Then we had a setback, a civil war, which destroyed everything we were doing. The majority of everything we had built was destroyed. This carried on for 16 years, and that is what led us to fight for peace. When we fought for liberation, we were also fighting for peace. This time, it took on an armed form, as well as a diplomatic and political form. This led to the signing of the Rome Peace Accords on October 4, 1992. We had to start again with the reconstruction of everything that was destroyed. The country had made several gains in the areas of culture, energy development, and the development of mineral and carbon resources. We had also made industrial advances, such as in the textile industry. Once the war was over, we had to conduct full reconstruction efforts throughout the country. We had to undertake our task in several directions. Construction was crucial, including assisting refugees, which numbered in the thousands. Infrastructure, including power lines, railroads, roads, schools, hospitals, and farms, all had to be rebuilt. Besides construction, we had to fight against poverty and at the same time lay down the foundation for development. We didn’t want to wait until we finished the reconstruction to start the fight against poverty, or to wait until we could attract investment. We had to move together in all these directions. That is how we came to attract all this investment and create investments from within as well as a private sector, which did not exist before.

What are the main priority areas that the country needs to focus on during the next five to 10 years?

We have always seen agriculture as the basis for development. The mining sector was not a big priority for us. Even today, the current government believes that the priority should be agriculture. Agriculture transforms industry and produces renewable materials, even for energy. However, agriculture is more important for food security and self-reliance. Of course, to succeed, even in agriculture and other sectors of industry, you need infrastructure. It covers everything from the road networks that are used to commercialized products to electricity and telecommunications. Development can only be consolidated once these are ready, and only then can large coal and gas projects become viable.

What role do you think the media, in general, can play in helping the country develop?

Since the inception of the idea of freedom of expression and the right to information, many modes of media have been practiced due to the direct nature of our democracy. The media helped us consolidate the unity of the country by aiding us in orienting our people toward a common objective. A country like Mozambique, which had nothing at the time and was a melting pot of different ethnic groups and language barriers, had to be consolidated as a sovereign state. In 1998, we abolished the Ministry of Information, which was the ministry that worked in tandem with the media. We had to discuss and adopt a press law that would cover the administrative aspects of the media to coordinate all operations, without interfering with written content. Freedom of the press was enshrined in our constitution, and from that day everything became more visible and more understandable. Very few countries had reached our level freedom of press at that time. It was difficult to draft that law, and even the journalists themselves did not agree with each other in all aspects. The government had to intervene again, essentially to consolidate the ideas of the journalists themselves. Finally, we worked with the journalists to find a solution.

“Once the war was over, we had to conduct full reconstruction efforts throughout the country.”

What led you to set up the Chissano Foundation in 2005?

The motivation was the perception of some of my former colleagues in government and elsewhere of what I did to bring peace back to Mozambique. They thought that we should capitalize on that to create the foundation, which would help to create a base for the continuation of the fight for peace and for the consolidation of stability. We realized that peace is not an end result, but instead that it has to be renewed constantly. There are also several angles of peace that have to be considered; it is not just the resolution of any violent conflict or war, but also conflict in social life, whether it is family relations, domestic violence, religious ignorance, or even poverty. When one thinks about peace, it has to be seen through all the different angles. In order to consolidate peace, one has to tackle more grassroots problems, such as hunger.

How does the Chissano Foundation contribute to the development of the social fabric of the country?

We do our best through volunteers who work with us to bring more knowledge and awareness to the people so that they can change by themselves. Culture is a large part of this. People are arriving in Mozambique from all corners of the world, while the cultural wealth of the country is not being developed. In the area of peace, we have created a partnership with the Polytechnic University to create the Institute of Peace and Conflict Studies. We want to make peace an innate part of human nature. Just like one knows how to dress and wash, one should know how to be peaceful. We are also creating “peace camps” for younger children to be educated about peace and culture, so that they can grow up to be ambassadors of our vision of peace. We are also developing a center where we train farmers in new agricultural techniques. This is done in conjunction with the Naandi Foundation to fight hunger and poverty. Through this scheme, we aim to help farmers market their products and to double, triple, or multiply their income by five.

Where would you like to see the Chissano Foundation five years down the line?

All of the projects that I have mentioned will be very visible to our nation, and then to the world. We think that we have found the key to implement what the foundation was created for. Our operations are non-profit, but in order to secure the funds to do all of these things, we came to the conclusion that we have to have an activity to generate funds. Therefore, we are going to create a company that will work for profit. However, these profits will be injected directly into the foundation for its use in various projects.

How do you suggest Mozambicans should empower themselves to take charge of their economy and ensure sustainability?

In view of all the discoveries of mineral resources, we should try to educate ourselves better. These resources are not the basis for our development. They are not sustainable and are finite by nature. We need something that will develop the country for generations to come. This begins by mastering technology, increasing knowledge as much as possible, and passing that down through the generations. Through increased creativity, each generation can develop new technology to make life easier. This continues with having to keep up the spirit of work. We cannot simply wait and buy food from elsewhere. People often tell me I am wasting my time with agriculture because there is too much food in the world. However, at the same time people around the world speak of a global food shortage.