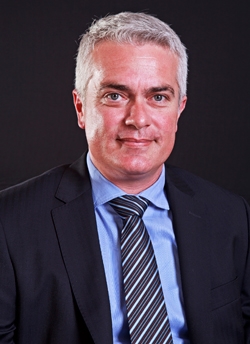 Martijn Van de Linde was appointed CEO of Abu Dhabi Terminals (ADT) in 2010. He currently leads ADT’s management and the operation of the Khalifa Port Container Terminal, the most technologically advanced and first semi-automated port in the region. He also oversees ADT’s management and operation of other Abu Dhabi-based ports: Mina Zayed, the main gateway for cargo in Abu Dhabi; and Musaffah Port, located in the heart of Abu Dhabi’s industrial area. Prior to joining ADT, he was CEO of the Port of Salalah in Oman. He also held the post of Vice-President of Global Operations for APM Terminals and was Terminal Manager at the Port of Tanjung Pelepas in Malaysia.

Share on:
"Our productivity is higher per crane, per unit, and per hour than that of a normal, traditional manual port."

What does the opening of the new Khalifa Port signify for Abu Dhabi?

It is a new era, and the opening signals a new phase in social and economic development. Until Mina Zayed, access to the Abu Dhabi economy was limited. There were no means of transport other than overland or by air. Mina Zayed signaled the first signs of significant economic growth because for the first time there was direct international access by sea. It served that function for close to 40 years, and then Khalifa Port came along. There were several reasons that drive its construction and opening. If you look at capacity growth and urban planning, then port infrastructure and capacity had to move to a new location. Over the last four to five years, compound growth has accelerated. Considering Abu Dhabi until 2005-2006, it moved around 250,000 TEUs a year. Over the last six years, measured annual compound growth shows more than a 20% increase per year. It is somewhat disconnected from the global economic environment, and is largely driven by successful economic policies. The different sectors that we are actively invested in—tourism, oil and gas, steel, and transport, to name a few—are driving investment into infrastructure and also into the establishment of basic industries. Previously, everything was imported and nothing was made here. Now, our industries are starting to produce steel, plastic, aluminum, and pharmaceuticals. Growth is driven by exports rather than imports.

What can customers expect when they come to the region’s first semi-automated container terminal?

They can expect the highest standards of service. The fact that the port is automated means that a lot of the variability has been taken out of the process. If you are a shipping line and you are scheduled to call at Khalifa Port, you know it will be efficient. Our productivity is higher per crane, per unit, and per hour than that of a normal, traditional manual port. We turn around trucks much faster than any other port in the region. It takes us only 15 minutes or so to get a truck in, loaded, and out—a normal port would take around 1-2 hours. By going to Khalifa Port you can deploy a truck 10 times a day, so you can move 10 containers instead of two. For trucking companies, this means they can increase revenues and optimize their assets.

“Our productivity is higher per crane, per unit, and per hour than that of a normal, traditional manual port.”

What trends have you noticed in regard to the amount of export cargo handling in recent years?

In 2011, we had growth of 20% in year-on-year terms. From 2012 to 2013, it has only been 4% so far, but most countries around us have contracted. The fact there is more produced here means there are fewer finished products and more raw materials being imported. We see bulk cargo increasing, and we see exports on containers increasing because more products are being made here and exported. At the same time, because of the active investment in infrastructure, you see a lot of project cargo, such as heat exchanges, pipes, and other large goods used to build factories or power plants. Another sector that is experiencing growth is the cruise business, which is related to tourism. Five years ago, there were zero cruise passengers, but now we have 170,000 cruise passengers coming to Mina Zayed every year. The growth has been huge.

Abu Dhabi terminals recently came to an agreement to offer a direct link to India through Khalifa Port. What is the mutual benefit of the agreement, and what do you think it signifies for Khalifa Port?

There is a lot of historic trade between the UAE and India. It is necessary for us to have direct connections there from Khalifa Port and back just to support trade here. Every time we expand the amount of destinations we reach from the port, we are enhancing the network. The bigger the network, the more attractive we are as a port. Every time we can publish we are expanding coverage here, we have a shipping line including Khalifa Port as a destination, which again increases our attractiveness.

How would you compare Abu Dhabi to Asian and European transport hubs?

Potentially, we can play a similar role. As a hub, we can provide a consolidation and distribution function for the region. I think that is the role we will play in the future. If the rail connection is there, it means you can get anywhere on the Arabian Peninsula from Abu Dhabi. Whether you go to Saudi Arabia or Oman, you will only have to stop in Abu Dhabi. Discharge your containers here and do the rest by rail. Hong Kong plays that role for Far East Asia and Singapore plays that role for Southeast Asia, while Rotterdam and Hamburg play that role for northern Europe. There is a limited amount of places in the world that can play that role; Abu Dhabi can be one of them.

What is it that makes the city an attractive destination for cruise ships?

It is becoming an increasingly attractive destination for tourists. There are more things to do; the theme parks, the hotels, the resorts, it is very similar to Dubai in that sense. You can come in winter and catch some sun, and we have Ferrari World as well. It seems to appeal to a lot of people. There are many attractions being built; Saadiyat is huge. By the time that is finished it will be a massive tourism attraction, with shopping as well. It is a very purpose-driven sector in the economy that wasn’t there before. It has been created through demand. There was nothing there before.

How will Khalifa Port contribute to Abu Dhabi’s Vision 2030?

There is a policy to diversify the economy away from oil and gas dependency. If you look at the GDP figures over 2012, non-oil GDP has been growing much faster than oil GDP, so it is working. We are growing industries that were not here before. The port was only there to serve the local market in the past. Now, we are building a business, which is not only related to Abu Dhabi, but for other destinations as well: transshipment. There is a lot of revenue that the port will drive that was not captive for Abu Dhabi before. We are building a business and an industry. We are contributing to the sector already. However, I think the most important part is that it needs to accommodate and not limit economic growth. It needs to drive it.

What significance do environmental concerns hold in your day-to-day operations?

The port industry is not a major polluter, but of course we monitor our emissions as well as soil and water pollution. However, most of what we do is considered to be fairly green. We analyze how we can reduce the amount of energy we consume per unit that we handle. We try to electrify as much as we can instead of using diesel-based equipment. We are looking at alternative energy resources. The difference between Khalifa Port and Mina Zayed is massive. We went from an emission of 40 kilograms of carbon per container at Mina Zayed to 16-18 kilograms per container at Khalifa Port. Of course, alternative energy is a long-term investment because the price of traditional energy here is so low. We could run the entire Khalifa Port on four or five windmills. However, we would need a combination of solar and wind power.