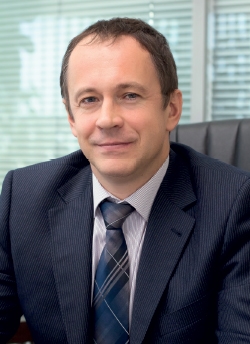 Arseny J. Naboko attended Almaty Power Engineering University between 1984 and 1991, before beginning his career as an Engineer at the Computer Graphics Department, Almatinskaya PO Alatau in 1991. From 1993-1994, he was an electrical fitter at Almaty Central Heating and Power Plant 1, before becoming the Manager at KIVA, ALAN, and then Prima in 1997. In 2002, he began moving up the ladder at Prima to Director and then Executive Director, before taking his current position of Director of Prima Distribution in 2008.

Share on:
Could you talk about Prima Group’s main achievements in Kazakhstan since it was established? The challenges that the company has faced in 2013 are similar to those that we would […]

Could you talk about Prima Group’s main achievements in Kazakhstan since it was established?

The challenges that the company has faced in 2013 are similar to those that we would face in any other year. The quality of the transport infrastructure is not satisfactory, and there are many factors that have contributed to this, such as low population density, long distances between cities, poor road quality, and a lack of vehicles. On top of that, there are a limited amount of storage solutions in Kazakhstan. There are only a few class-A warehouses, and they are mainly located in Almaty, Astana, or Aktyubinsk. Most of Kazakhstan’s warehouses fail to comply with international standards as they were inherited from the Soviet Union and have only been slightly renovated. It is not an exaggeration to say that all the market players at some point have experienced the same problems as Prima Distribution. The national economy is developing rapidly, and the infrastructure can’t keep up. Also, there is something of an issue with logistics and distribution professionals. Given Kazakhstan’s vast territory and low population density, it is now necessary, in my opinion, to improve the personnel. There are around 4,000 employees working for Prima Distribution. Sadly, new entrants to the profession are lacking experience, and hence do not have the necessary skill set to compete in this market. To ensure high-quality service, Prima Distribution has set up its own training centers.

What has been the growth strategy of Prima Group to become what it is now?

What greatly contributes to the company’s success is the level of the top management’s commitment to ongoing business processes. Shareholders are also actively involved in corporate decision-making. We have worked hard to earn a reputation as a reliable business partner; therefore, working with Prima Distribution is challenging, but can establish you as a good name. The same applies to our employees—it is easy for people to find a job after they have worked with Prima Distribution. Our personnel’s well-being is of paramount importance to the company; hence, some of our key employees have been working with us for over a decade. We are investing in the development of our strategic planning department, as the times when one could rake in the money have passed. Prima Distribution consistently follows standards of transparency, and we feel compelled to fulfill our obligations under the agreements, whether they be written or verbal. Our code of ethics makes the company attractive to both potential partners and banks.

How would you describe the market currently in Kazakhstan?

In my opinion, the FMCG and consumer packaged goods (CPG) market is rather steady. To put it mildly, people don’t eat less regardless of the state of the economy. Most of the FMCG companies that we work with show constant annual growth up to 10%. Of course, growth rates tend to slow down as the market becomes saturated, but at the same time, consumers are becoming more selective. It allows us to develop a niche market for quality goods. Kazakhstan is a post-Soviet country; therefore, consumer culture is in a way restricted. If we compare gross consumer spending in Kazakhstan or Russia with that of Europe, the numbers differ significantly. On the other hand, it is a great source of growth, owing to the fact that there are more and more people who travel today and experience different lifestyles.

How do you maintain these strong relationships with your international partners?

Our fundamental business principle is being transparent and honest with our partners. Prima Distribution is a predictable and reliable partner. If a problem arises, we talk it through and always try to resolve it. As a result, we have associates that have been working with Prima Group for over a decade. Many of our partners do not insist on bank support, which allows for lower business costs.