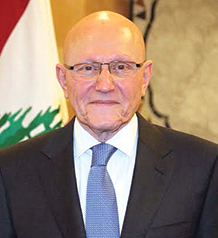 HE Tammam Saeb Salam has been Prime Minister of Lebanon since February 2014. Prior to that he served in the government as Minister of Culture during 2008 and 2009. His Excellency is a graduate of the Haigazian University in Beirut and also holds an Economics and Management Degree from the UK. He began his career as a businessman before entering politics at the beginning of the 1970s.

Share on:
As Lebanon’s Prime Minister, what are your administrative and legislative goals for improving the ease of doing business in Lebanon? Our services have been working in the framework of a […]

As Lebanon’s Prime Minister, what are your administrative and legislative goals for improving the ease of doing business in Lebanon?

Our services have been working in the framework of a project supported by the IFC to simplify administrative procedures related to the constitution of the various types of companies, or their liquidation. The same project addresses reforms in the areas of commercial registry, types of assets placed, and collateral and bankruptcy procedures. All this is meant to improve the business climate while safeguarding rigor and transparency. The resulting policy recommendations will soon be translated into new laws and executive decrees.

What sectors are the most promising for attracting foreign investment over the medium term, and what are you expecting for 2015 in terms of inflows?

We believe that energy, real estate, and tourism constitute attractive opportunities. The law on PPPs will be promulgated as soon as the political environment permits, which will provide an effective conduit for investments in all these areas. In addition, the launching of the activities of the Capital Markets Authority will no doubt boost the Beirut Stock Exchange and facilitate the movement of capital for investors and for the domestic market by affording flexible access to both equity and debt. Traditionally, Lebanon has a positive balance of payments due to a steady flow of remittances estimated at around $7 billion. Noticeably, bank deposits have increased by close to 3% at mid-year, despite regional and local political uncertainties; this is a clear sign of sustained confidence in the stability of the country and of the continued attractiveness of the banking sector.

What steps are being taken to reduce the country’s public debt?

Public deficit has decreased this year as a result of a slowing in expenditures and a slightly improved tax inflow. However, the durable solution is in achieving high growth levels because it automatically improves fiscal revenues without introducing additional taxes. Mathematically, a higher GDP will also cause a fall in the ratio of debt to GDP and bring us closer to internationally acceptable levels. It is important to note, however, that economic activity, though insufficient by our standards, remains at satisfactory levels when compared to countries of the region and beyond. This represents an achievement in a country witnessing the political difficulties Lebanon is going through; a country that, in addition, has seen, in less than two years, a massive inflow of foreigners who now constitute one-third of its national population. This is a proof of the high resilience of the private sector and a demonstration that the uniqueness of the Lebanese model of democracy, tolerance, liberalism, openness, and coexistence is, and will continue to be a powerful attraction for investments and business.