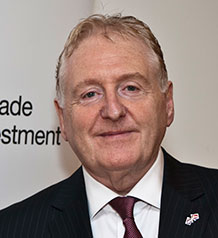 Christ Gaunt served in senior management positions at several prominent UK beverage companies before consulting for Coopers & Lybrand in Croatia on a major restructuring project and then joining Coca-Cola, where he served in senior management positions in Eastern Europe and Central Asia. He went on to be as CEO of Panonska Pivovara Croatia (Carlsberg International), General Manager of Efes Beverage Group in Bulgaria, and President of Efes Invest (an Anadolu/Coca-Cola joint venture). Following the merger in 2005 of Efes Invest and Coca-Cola Içecek (CCI) Turkey and the subsequent IPO, he was appointed Chief Operating Officer of the new company. In 2007 he was appointed President of CCI International Operations (overseeing 10 countries). In January 2013 Chris was appointed Vice Chairman of the British Chamber of Commerce Turkey and elected Chairman in July 2013.

Share on:
"Our main priority is still our members, of which we have over 400 paying members."

How did BCCT’s partnership with UK Trade and Investment (UKTI) come about?

There was an initiative launched in 2012 by the Ministry of Trade and Investment under then-minister Lord Green. The issue was that the UK government wanted to look at how they could help create a global ecosystem of support for British exporters. Lord Green came up with this initiative, whereby they would look at the 20 fastest growing emerging markets, which at the time included Turkey. They wanted to see how they could bring the knowledge and experience of UKTI together with the other British business NGOs, including the British chambers of commerce and other British business groups. UKTI had a budget from the British Government to provide financial support so that British NGOs could enhance their capabilities so they could work hand-in-hand with the UKTI team. Over time UKTI would transfer services it was providing over to the chambers and other organizations. This was launched in March 2013. At that time all the 20 markets were invited to London and the respective overseas business networks (OBNs) delivered their business plans and discussed what services they could offer that would be comparable and complementary to what UKTI was already doing. The UKTI team in London assessed our plan and whether it would add value for them. Once approved by the UKTI, the government would then provide funding, which would initially last for two years.

What are your current aims?

Our main priority is still our members, of which we have over 400 paying members, the key to maintaining sustainable membership is providing a value exchange that is relevant and consistent.. Plus we have our major sponsors; we wanted to make sure that the big British investors in Turkey would be represented on our board, companies like Unilever, BP, Vodafone, Shell, HSBC, and so on. Those big players gave us that credibility so that UK companies could see that we have serious experience and knowledge availability from those large multinationals in our organization. The UK has been the largest investor in Turkey over the last 10 years, so we have a very strong relationship with Turkey and our bi-lateral trade continues to grow YoY, currently at around $12-13 billion with about 65% of that being Turkey-to-UK exports. Our aim is to balance that out and get it more 50-50 and more in favor of the UK if we can. It’s the opposite in terms of investment, with very little Turkish investment in the UK up until 2014. The breakthrough came with Ülker’s purchase of United Biscuits. That wasn’t just a big investment for Turkey but a big investment globally. That set the scene for other Turkish companies who could see what can be done in the UK and what other investment opportunities there are for them. We use that transaction as a case study for transparency and efficiency, and how easy it could be for other Turkish companies. Another part of our strategy is to engage with Turkish chambers of commerce. We have MoUs signed with 14 of the biggest Turkish chambers, from Van in the East, through Gaziantep, Adana, Ankara, all the way to Istanbul. We’re engaging and linking with them to create awareness for UK opportunities for their members and also linking UK business networks with these chambers so we can create more business for everyone. Our aim is ultimately to create an ecosystem that brings everybody together and creates direct links between these many networks.

Which sectors do you think represent the highest potential for UK-Turkish cooperation?

The sectors we prioritize in the UK are energy, infrastructure, design, health, education, innovation, aerospace, and increasingly agriculture, where we have a lot of technology in the agro-innovation sector. Turkey needs both investment and technological capabilities to develop self-sustainable energy production, especially with all the big infrastructure projects driving up demand. We can complement Turkey’s strengths in areas like civil engineering and construction. UK companies are involved in the third Bosphorus bridge and third airport projects for Istanbul, for example, on both the design and technology side. In healthcare we have in depth experience in PPPs, which is also a focus for UK companies in Turkey. In education, there’s a shortage of English-language teaching in state schools and there’s a demand for more UK educational institutions providing examination and the UK education system in higher education. Turkey’s HR ability is growing, and it has a very well educated workforce. Turkey is today an exporter of executives, considering the number of Turkish executives that run companies around the world. So Turkey will want to further strengthen its educational capabilities, and we feel that the UK can help provide that. In terms of R&D, there are also big opportunities. Turkey lacks a solid R&D platform in various sectors, like pharmaceuticals, and even in white goods. We can help with that. Arçelik/Beko just signed an agreement with Cambridge University to set up an R&D facility that would develop a next generation of white goods and home electronics. In terms of defense and aerospace industry, Turkey is still a critical country geo-strategically, and it has to have good defense capabilities and it has to be stable and strong, and it has to be an economic driver for the region and the link to other emerging markets around the area and beyond. In general, Turkey’s ascent to move from an emerging market to a developed market is creating a wealth of opportunities. Turkey has a strong manufacturing capability and capacity, producing products for other companies and other brands, but it doesn’t have international brands itself. The country wants to change that and move up the value chain, and this is creating opportunities in a wide variety of sectors.