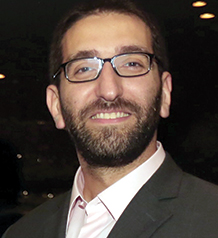 Pierre El Khoury is the General Director and President of the Board of LCEC, Lebanon’s national energy agency hosted by the Ministry of Energy and Water. A member of LCEC for 11 years, he started as a UNDP officer and then as a founding member of LCEC. Since 2009, El Khoury has been an advisor to the Lebanese Minister of Energy and Water on all issues related to sustainable energy, and to the UN ESCWA. El Khoury holds a bachelor’s degree in electrical engineering and a master’s degree in engineering management, both from AUB. He is a member of the Order of Engineers and Architects in Beirut.

Share on:
TBY talks to Pierre El Khoury, General Director of the Lebanese Center for Energy Conservation (LCEC), on the development of energy efficiency in Lebanon, awareness of energy conservation, and the country's 2020 renewable energy goals.

How has the LCEC transformed the energy efficiency landscape over the last 11 years?

Lebanon is part of the regional center for renewable energy and energy efficiency, so we compare our achievements here with the achievements of other countries in the region. Lebanon has made huge progress in this regard. In 2009, the government set an objective to reach 12% renewable energy by 2020. Today, we have installed more than 30MW of solar photovoltaic panels in the country and rank among the top 10 countries in the world in terms of solar water heater installations. Lebanon was also the first Arab country to adopt a national energy efficiency action plan, and we are currently ahead of the curve in comparison with our neighbors. Lebanon also boasts one of the best financing schemes for sustainable projects in the world through NEEREA, a project launched by Banque du Liban that has allocated over USD450 million in projects and offers loans with a zero interest rate over a period of 14 years.

How would you assess the level of awareness in Lebanon for energy conservation?

Lebanon has the most widespread awareness among the Arab world. However, we lack the development of large renewable energy projects such as hydropower plants or large wind farms to materialize our advances in the field. Such projects could also contribute to achieving our 12% target. The positive side of this is that decentralized projects at the consumer level in Lebanon tend to be efficient and active with initiatives, and this is the case with most energy efficiency projects. This is why individual solar heaters, renewable energy in hospitals, industries, or shopping centers, and nearly all the actions are decentralized, are booming.

What is the level of coordination between the public and the private sectors regarding energy efficiency?

LCEC functions as the technical arm of the Central Bank for loan requests to implement any type of energy or environmental project, which we review and assess before handing them for approval to Banque du Liban. LCEC is part of the Ministry of Energy, too; hence, we constitute the link that binds the public and the private sectors. When it comes to the LCEC, there is a great level of coordination between both parties.

How would you assess the level of greenhouse gas reduction in Lebanon?

We are not doing too well in that sense. Lebanon has a small contribution to worldwide greenhouse gas emissions, contributing less than 0.07%, but we are still not doing a great job in bringing greenhouse gas emissions down. We are also not doing well in waste management and deforestation. From the traditional power sector point of view, the fuel- and gas-based industry, we are also not doing well. We have a lot of room to improve.

What can be done to improve energy efficiency in Lebanon?

In 2011, the government approved the National Energy Efficiency Action Plan for 2011-2015, covering energy efficiency and renewable energy. We will publish the 2016-2020 plan for efficiency and renewable energy in two separate action plans for each. Financing has been flowing and funding has come in good numbers; for instance, we just received USD1.5 million as a grant from USAID and another EUR18 million from the European Central Bank. We are also building technical capabilities among engineers, technicians, and bankers. Now, the biggest effort must focus on the creation of new laws and regulations to set the rules for the industry, which takes time but is completely feasible.

Do you think the 2020 strategy will meet its targets?

Yes it will, and we will need to set our target for 2030 now. We try to keep things realistic. We could say we will reach 80% renewables by 2050, but we would not believe it. So 12% renewables by 2020 is realistic. That covers 12% of overall energy consumption in electricity and heating, which is a huge yet achievable scale.