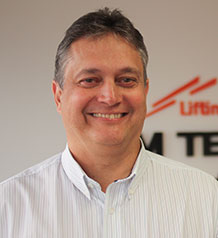 Kenneth Waugh has more than 30 years of experience in the coffee and banana industries, as well as logistics companies in Central America. He previously served for more than six years as Managing Director at Volcafé in Costa Rica. He is currently Managing Director of APM Terminals.

Share on:
"Moin will not be the largest container terminal in Latin America, but it will strive to be the most efficient one."

What were the most important milestones for the company in Costa Rica during 2016?

It was important to see the start of a project that will have such an impact on the country. We wanted to be a part of the largest project that will improve the economic development of Costa Rica. This is a year that has been marked by important milestones, one being the successful start of this construction in Costa Rica. Another milestone was the signature of the USD110 million contract for the purchase of all the lifting equipment that is going to be installed. This has been an important year thus far, and 2017 will also be important because it is then that we will be seeing the finished Infrastructure and we will be getting ready in parallel for the operations. We are investing a large amount of money, and people can see and feel this. The whole region now starts to react to the economic growth, which is also been important for us, in order to have support from the community and the country so that we could materialize our expectations. People are looking at Limon for touristic development, logistics, other services, and even for improvements to restaurants and services delivered for the area. We had a good year so far in 2016 keeping the project on time and within budget, and we will hopefully be seeing a lot more of that in the coming years.

What are the main highlights of APM’s 33-year government concession for Moin Container Terminal, and how did the company win the contract?

Moin will not be the largest container terminal in Latin America, but it will strive to be the most efficient one, a standard in safety and security to look up to, and in harmony with the environment. It will represent a major change of current paradigms since because of its efficiency in servicing and deeper draft it will be able to attract the exact same transoceanic vessels that go through the Panama Canal, thus connecting for the first time Costa Rica to this first tier shipping network. This will be a big game changer. The concession invited all interested parties to an open bid, and APM Terminals won the concession by proving to be the best partner for the Costa Rican government to develop a specialized container terminal. This is the first time in Latin America that a port of this level of specialization is being built on an artificial island. Since the design, we have been using various methods to build the facility a minimal environmental impact. We are going to have 650m of quay, a draft of 14.5m, and six STS cranes in the beginning. That will allow us to dock vessels of up to three and a half times the biggest vessel that actually docks in any port in Costa Rica. In the second phase, we will add another 600m of quay. By the end of the third stage, we will have 1.6km of quay, and more than 85 ha of container yard on the back to be able to handle all of the cargo, and workshops that will support the logistics.

Infrastructure remains a major challenge in Costa Rica. How do you see projects like the improvements to Routes 32 and 4 progressing?

There was recently a government sanction of the new concession contract for the construction of Route 32, which is an important step. The winners of the bid that was selected to take over this concession will spend seven to eight months in the design stage, and then approximately three years in building the expansion. Even though we would like to instantly have Route 32 tomorrow, we understand that it is also a major construction project and the involved parties will take their time. Route 4 that is the one connecting route 32 to the Nicaraguan border through the west plains of Costa Rica and has actually been in the building stage for several months; there is still a small connection of 10km that needs to be finished. Route 36 connecting Limon with the Panama border is one route in need of expansion, especially the bridges that still have only one lane. The good news though is that the construction of the bridge connecting the two countries over the Sixaola River has already begun, which is a major step in the right direction, and now demands the road leading to it. With the concession contract there is an obligation for the operator to secure funds for development projects in the Limon province. This is 7.5% of gross revenues, which in the first year alone results in about USD12.5 million. Development projects that promote the creation of jobs and economic improvement like this can make a difference not only for the Atlantic coast, but Costa Rica as a whole. A recent economic impact study requested from the Danish consulting firm Qbis showed that under very conservative assumptions we can expect from the Terminal investment the creation of 140,000 jobs.

What are your priorities for 2017?

Obviously, we have a priority to complete the building of the Terminal, and ensure that we have trained resources to start operations immediately. Also, we will continue with our involvement in the betterment of the community, providing through our CSR programs support to continue with the improvement of schools in the area, as well as coordination with Police and Public Authorities to work on Public Safety. How this can be done is not always simple. There are many points of view, so the priority is to reach a consensus on an agenda regarding what has to be done, regardless of political colors or personal interest. This is necessary to be able to push through those three or four items that will move us forward. We are on time, and 2017 is going to be the year of challenges. We are already hiring and training our operators; therefore, it is another dimension not only in building the asset but also building the operating structure that we are going to have in the future.