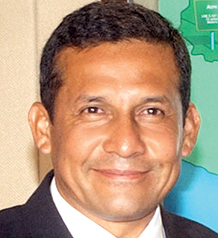 President Ollanta Humala joined the Army Officer School in 1979, and he studied zootechnics at Universidad Nacional Agraria La Molina. In the 2001 he earned a Masters at Escuela del Centro de Altos Estudios Nacionales (CAEN) in National Defense and in 2002, successfully completed a Master’s in Political Science at the Pontificia Universidad Catolica del Peru. He was a military attaché in France, where he began a PhD at the Centro de Altos Estudios para América Latina (the Center of Higher Studies for Latin America). In 2005, along with his wife Nadine Heredia Alarcón, he founded the Peruvian Nationalist Party. In June 2011, he was elected Constitutional President of the Republic, swearing into office on July 28th, 2011.

Share on:
TBY talks to HE President Ollanta Humala, President of Peru, on the recent summit held in Panama, Peru's role in the regional economy, and ways to extend cooperation into new areas.

What has been the significance of the VII Summit recently held in Panama for the dialogue in the Americas?

The immediate concrete result is that after 53 years, hemispheric dialogue is no longer exclusive. Finally, we all talk together, even if simply to comprehend our differences. That, after all, is what democracy and the equality of all states is all about. For years we have demanded that the embargo that isolated Cuba be brought to an end. The normalization of bilateral diplomatic relations between the US and Cuba is a courageous step toward this end that will allow for regional dialogue, indispensable in establishing a new framework for peace and cooperation for development.

Latin America has a promising future, despite some uncertainties. What is the role of Peru in the upcoming years?

Most Latin American countries have shown their financial and economic strength during this international crisis. Peru has stood out among them thanks to its fiscal and macroeconomic policies. They allowed us to have 16 years of continuous growth and to implement social policies that effectively fight against poverty. Peru will continue as a regional reference on successful economic and social policies. But also, as an attractive country for investors—with an enormous potential in different sectors—Peru will continue to receive investment from global and regional capitals, and show them the opportunities in our internal markets and as a center for regional activities. Latin America is widely known for the production of commodities, but now the region has to take a step forward and position itself as a region in a process of productive diversification. Peru has already been working on a National Plan of Productive Diversification to generate alternatives that boost economic growth and sophistication. In addition, Peru foresees that the Pacific Alliance is an opportunity to make regional economies more competitive and take advantage of complementary markets.

The Pacific Alliance has emerged as a significant regional economic force. What are your long-term ambitions for Peru’s place in the alliance?

Nowadays the Pacific Alliance is in a very good moment. This alliance, as a whole, constitutes the eighth largest economy in the world, and represents the seventh largest exporting group worldwide. It attracts more than 40% of the FDI that flows into the Latin America and the Caribbean region. This, summed up to the results obtained to date, as well as to the tasks still in agenda, has attracted the interest of 32 observer countries from five continents, which makes us realize that we are doing things right. In the long term, I would like to see that the innovative initiatives that the Pacific Alliance is seeking to implement create positive results and serve as a reference to other countries in Latin America and the Caribbean region.

Peru has seen a decade of strong economic growth and declining inequality. What economic ideology has guided your presidency with regard to balancing foreign investment and domestic policy concerns?

A focus on economic growth with social inclusion rests at the core. In this sense, private investment has been essential to achieving meaningful development outcomes that raise people out of poverty. Private investment has led to a higher level of salaries, household income and consumption, which has allowed an expansion of the middle class and a good performance in poverty reduction. For this reason, investment is actively promoted by the Peruvian government, both domestic and foreign. During 1H2014, 56% of FDI flows came from the reinvestment of profits, reaching high rates in sectors such as services (34.5% of total reinvestment), mining and hydrocarbons (32.7%), and the financial sector (15.5%). On the other hand, Peru has been ranked 35th out of 189 countries in the 2015 Doing Business Report, and second in Latin America. An important factor to highlight is that Peru has comparative advantages that attract investment.