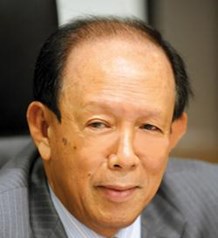 Tun Musa bin Hitam currently serves as the Chairman of the World Islamic Economic Foundation. From 1981 to 1986, he served as Deputy Prime Minister under Mahathir bin Mohamad. He has a bachelor’s degree from the University of Malaysia and a master’s degree from University of Sussex. He also holds an honorary doctorate from the University of Sussex and an honorary doctorate from Ohio University. He has held a number of key government posts, including Chairman of the Federal Land Development Authority (FELDA), Deputy Minister of Trade and Industry, Minister of Primary Industries, and Minister of Education. He also served as Malaysia’s Special Envoy to the United Nations (1990-1991), and led the Malaysian delegation to the UN Commission on Human Rights from 1993 to 1998, where he was elected Chairman of the 52nd Session of the Commission in 1995.

Share on:
"The ultimate goal is to have all participating countries align agendas."

Where do WIEF and its conferences make the most impact?

Around 10 to 12 years ago, the Islamic world, in particular those under the umbrella of the Organization of Islamic Conference (OIC), was neglecting issues relating to the economy and economic development. The OIC was mainly geopolitical, a UN restricted to Muslim countries. With that objective in mind, the WIEF was established on the sidelines of an OIC summit. We organized an annual economic symposium for several years until the initial issues became politicized. When the OIC came under the chairmanship of Malaysia, our prime minister decided to set up this economic cooperation under a separate organization—this was the beginning of WIEF, though still under the patronage of the OIC. A research organization was assigned the responsibility of organizing the launch and I was appointed chairman. We had our first meeting in Kuala Lumpur in 2006, where we addressed a broad range of topics with more than 400 high-level executives from all over the world. It was my vision from the beginning to have as the main objective improving the livelihood of the Muslim society at large. None of our activities, therefore, touch on issues related to religion or political ideology. The word spread that we were truly interested in talking about business, and thus we could bring a large number of Muslim and non-Muslim businessmen together. For politics or religion, there are already hundreds of other think tanks; we strictly discuss business, and that is our unique selling point. Today, we have an average attendance of 2,500 people at each conference. We recognize that many Muslim communities around the world live in disadvantaged positions and we want to empower these people. For example, Indonesia has around 56 million SMEs, contributing almost 90% of the GDP; with a bottom-up approach you can see how important these are for the global economy, especially in developing countries.

How can we evolve the discussion forward between Muslim nations and what is the ultimate goal of the forum?

The ultimate goal is to have all participating countries align agendas for the economic development of their respective nations and to enter the mainstream global economy. The conference has five main topics. The first is infrastructure, which is a primary enabler of economic development. Second is halal tourism, and we increasingly look at global destinations to build this tourism segment. Third is Islamic fashion, which is under rapid development, with global demand for modest fashion. Furthermore, we look into Islamic finance and creative industries. With this broad range of topics, we will find enough common ground.

Do you think the process for making that happen should mirror the ideas of this forum?

We need the willpower of the countries concerned to be all-inclusive; their business and political leaders should recognize the relevance of this global discussion. We want them to show their concern for the well-being of the people. Economic development should not recognize boundaries or have limitations—that is as political as we will go during this forum. Regardless of their religion, region, or country, anyone participating should accept this basic principle. Non-Muslim businesspeople join our events as well. The obvious objective is development at the highest level. Islamic should not just mean religious, but rather good corporate governance, green, and environmentally friendly. Employment should be fair as well, and this is one of the reasons we are pushing forward the agenda for Islamic finance. The western well-established financial system has suddenly collapsed and we want to move the financial industry to operate ethically again. In Islamic finance, there are still risks when you invest; however, the difference is that these risks are shared. It is not relevant whether this practice is just Islamic, it can include practices by the Norwegian government as well—it is perhaps even more Islamic than some Islamic countries in terms of its practices. Islamic finance has caught fire as never expected. In Malaysia, the majority of customers are non-Muslim Chinese people who understand their money is safe here.

How do you think Muslim nations can work together to convey their ambitions to investors around the world?

Islamic finance and banking are still relatively new because the western system has been established since the early beginnings of the banking industry. In 2013, we held the WIEF in London—the first time we did it in a non-Muslim country—on its invitation. A year later, the UK government launched a sukuk fund totaling GBP200 million, which was 10 times oversubscribed. This made it clear that the demand for honest and ethical lending systems, for safety and security, and for wealth sharing in the system is large in many places. Although we keep WIEF a low-key conference—we hardly advertise—in 10 years we have grown to become a global reference point. We want to spread the word about the opportunities that Islamic finance offers; the biggest contractors in the world can now turn to issuing sukuk to raise capital for their infrastructural projects. The challenge is that many prejudices and fears about Islam still exist. We have a cultural agenda as well, and on the sidelines of the forum we organize a Marketplace of Creative Arts, a place for young people to get involved in dance, music, fashion, and film.

What are your ambitions for WIEF?

We are not an institution that forms or passes resolutions. Rather, we provide our participants the opportunity to meet each other to engage in global business. We simply facilitate and are glad to see many young, new, and international people together. Our ambition is to grow, not in terms of size, but in the range of topics we discuss. We now have activities for the entrepreneurial development of women and a young fellows program. Under the WIEF umbrella, we have events in 20 cities every year. Businesses like to do their signing ceremonies at our forum and we greatly encourage this. The business conducted here is worth billons, and though it is not just about the numbers, it shows the relevance of this meeting. It is amazing to see how we are able to facilitate this and how WIEF has developed in the past 10 years.