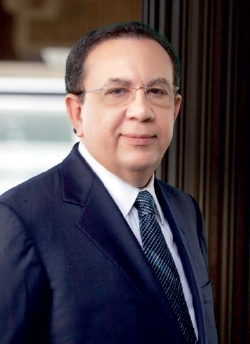 Héctor Valdez Albizú was born in 1947 and graduated in Economics in 1971 from the Autonomous University of Santo Domingo. He began his career at the Central Bank of the Dominican Republic (BCRD) in 1970 as a Technical Assistant in the Economic Research Department. Having risen through the ranks, he first became Governor in 1994. He was reconfirmed in that office in August 1996 by the then President Leonel Fernandez Reyna, and appointed Cabinet Minister, occupying that position until August 16, 2000. Again, on August 16, 2004, President Reyna, appointed him Governor of the BCRD. He was reconfirmed in the role in 2006, 2008, and 2010, and again in August 2012 by new President, Danilo Medina.

What is the attraction of the Dominican Republic as a foreign investment destination?

The strong macroeconomic performance of the Dominican Republic over the past eight years, as well as the country’s political stability, legal security, and social peace, have been the main incentives attracting new businesses and investors. Since 2005, the Dominican Republic has posted average annual growth of 6.7%, above the Latin American average of 4.3% for the period. In addition, we controlled inflation at an average of 6.2% during this period and enjoyed relative exchange rate stability, with an average depreciation of 3.2%. These favorable results were achieved thanks to structural reforms in the financial system and the use of more open trade policies and strategies.

What are the main highlights of the financial policies adopted by the Central Bank of the Dominican Republic (BCRD)?

We are convinced that key to achieving sustainable economic growth is sustained price stability, as well as ensuring the proper functioning of the financial and payment systems in our country. Only then can business and people schedule their consumption plans, savings, and investments with relative certainty, creating the necessary conditions for long-term growth.

Our economy has, in recent years, received the highest ever levels of foreign investment in various economic sectors such as mining, trade, industry, tourism, and real estate. Without a doubt, the mining sector will see greater dynamism in the coming years, especially thanks to Barrick Gold’s mining operations; we also have bright prospects for tourism, free trade zones (FTZs), and agribusiness. Additionally, we expect the financial sector to maintain the solid performance it has shown in recent years.

“ Overall, the financial sector has become healthier to the point where today it maintains performance indicators well above international standards. “

In your opinion, how can investment and the industrial sector evolve over the next few years?

In May, the BCRD implemented a series of expansionary measures to stimulate private sector credit and domestic demand; we released approximately Ps20 billion of resources from legal reserves (equivalent to more than 3%) to be channeled into the productive sectors to finance projects at historically low interest rates for a fixed term of six years. Specifically, these resources targeted manufacturing, agriculture, and the purchase of housing units, as well as trade, SMEs, and consumers. These monetary measures have resulted in a more dynamic credit climate in the private sector, growing at an annual rate of around 15%, which, along, with increased public investment in recent months, has contributed to the revival of economic activity. We expect our economy to grow by approximately 3% in 2013, rising to 4% or 5% in 2014.

What strategies is the BCRD implementing to encourage further specialization of the national economy?

We are aware that timely and adequate funding is a prerequisite for the growth of all economic sectors. Accordingly, we encourage greater access to credit for economic agents, reducing the costs of financial intermediation and promoting a more efficient allocation of financial resources. In particular, we have taken steps to ease the credit approval criteria for small debtors and reduce legal reserve requirements for commercial banks from 20% to 12.3%. Furthermore, we have supported the development of the mortgage and trust markets, as well as the creation of sub-banking agent services. The BCRD has also contributed to the development of the stock market, both by supporting actions taken by the Securities Superintendency (SIV) and by deepening the internal stock market through the issuance of securities in accordance with international standards. In fact, we are the largest issuers of securities in the country.

How is the institution promoting further financial transparency in the national economy?

Transparency is the bedrock of economic agents’ expectations and accountability. We have strengthened our communications policy and the dissemination of information, particularly concerning the decision-making process. For example, we publish monthly statements after each monetary policy meeting, as well as biannual economic projections, and we also hold regular press conferences to report on economic performance. Additionally, the BCRD publishes quarterly economic reports, the result of all monetary transactions, and guidelines for the implementation of monetary policy through the monetary program.

What actions has the BCRD taken to promote further modernization in the financial sector?

On the one hand, we have regulated a more competitive and transparent banking sector with a varied range of well-regulated products such as development of the mortgage and trust markets, the creation of sub-banking agent services, and the regulation of credit cards. Other initiatives aim at strengthening the banking and financial culture of economic agents; we created the Central Classroom (Aula Central) project, and the Diploma on Economic Journalism, as well staging communication seminars on economics. We also plan to implement a National Financial Literacy Survey, which will help to develop a national strategy in this context. On the other hand, we have made significant progress in open market operations with, for example, the dematerialization of securities issued by the BCRD, which contributed to the deepening of the secondary stock market.

What steps is the BCRD taking to promote macroeconomic growth for 2013 and beyond?

In early 2013, our economy was affected by a combination of a moderation in global economic growth and a decline in domestic demand, due to the impact of a new tax reform. These factors led to growth of 0.3% during the January-March period of 2013. Faced with this reality and in an environment of low inflationary pressure, we decided to cut, by 75 basis points, the monetary policy rate, while releasing around Ps20 billion from legal reserve resources. We also eased credit conditions for small debtors, facilitating the recovery of private loans. As a result of these measures, as well as increased capital spending in the public sector, the economy recovered to grow 5.5% in 3Q2013. We expect this to continue, bringing year-end growth to our projected 3%.

The implementation of laws and regulations in line with Basel principles has ensured the banking sector’s high levels of solvency, capitalization, and profitability. What challenges does the economy face in sustaining its pace in light of peso-dollar volatility?

In light of our objective of maintaining price stability, we would adopt necessary measures to prevent high exchange rate volatility from jeopardizing our inflation target. The banking sector maintains high levels of solvency, capitalization, and profitability, as well as a long position in foreign currencies, which are factors reducing that vulnerability. Additionally, current regulation sets a limit on the channeling of loans to sectors that do not generate foreign exchange currency, mitigating credit exchange risks. The banking sector as a whole is funded locally in pesos and does not offer as wide a variety of instruments as developed markets.

How would you assess ties with the IMF?

Relations with the IMF are excellent. Recently, we received welcome feedback regarding the Fund’s evaluation of Post-Program Monitoring (PPM) for the country. In the monetary context, we decided to increase the BCRD’s benchmark interest rate by 200 basis points due to strong pressure in the exchange market that would have endangered our inflation target. On the fiscal side, the government has implemented a successful reform that will reduce the deficit by about 4% of GDP. I should stress that, over the past eight years, the Dominican Republic has signed two stand-by agreements with the IMF, both highly positive for the country; the BCRD has fully complied with all set goals, which has allowed us to strengthen our reserves, meet inflation targets, and contribute to maintaining macroeconomic stability. We have also passed new laws to strengthen public sector institutions, eliminated several subsidies, and pursued more efficient tax administration. Overall, the financial sector has become healthier to the point where today it maintains performance indicators well above international standards. We understand that we must focus on completing the PPM agreement, which is scheduled for 2014. Depending on local conditions and the international economic climate, the government could evaluate the possibility, in the future, of engaging in a new agreement with the IMF beneficial to the country.