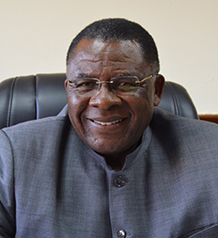 Patrick D. Chisanga is a fellow of the Institute of Chartered Secretaries and Administrators (UK), from the London School of Accountancy. He is a Licentiate member of the Zambia Institute of Certified Accountants, ZICA. He is a fellow of the Institute of Directors of Zambia and a member of the Institute of Directors of Southern Africa. He is the current Chairman of Air Namibia (Zambia ltd). He previously served as advisor to Konkola Copper Mines Ltd, KCM, Zambia’s largest Copper Mining Company from 2009 to 2013. He is the former Governor of Rotary International District 9210, comprising Zambia, Zimbabwe, Malawi, and Northern Mozambique. He has recently been appointed to serve as Chairman of Rotary International in Africa. In this capacity, his mandate is to coordinate Rotary’s Development and Humanitarian Work on the African continent. Patrick Chisanga is currently Director General of the Zambia Development Agency (ZDA), responsible for promoting Zambia’s economic growth and development.

Share on:
Which sectors have the greatest growth potential? I would definitely highlight agriculture. If you consider our climate, the quality of our soil, the volume of rainfall, and the amount of […]

Which sectors have the greatest growth potential?

I would definitely highlight agriculture. If you consider our climate, the quality of our soil, the volume of rainfall, and the amount of sunshine, the entire country could become the breadbasket of the continent. The Zambian government has developed a farm blocks program in each of the 10 provinces of Zambia. These will be demarcated with 100,000ha of land available for investment. We have started the process of marketing the farm blocks, and are in the process of identifying a partner for our farm block in the north. We put out a global tender and the response was quite overwhelming. Today, we have shortlisted four possible joint venture partners. We will be completing the process, and hopefully signing with a partner, by the end of September. We want to see major agricultural development. The same applies to the other nine provinces. We have set up many farm blocks and there is a lot of interest at the moment. One company intends to establish a sugar plantation on a large scale, while another is to focus on producing biofuels from cassava, working with small-scale farmers. In terms of mining, the northwestern province is the new Copperbelt.

Which countries have shown the greatest interest in Zambia?

The traditional investors in the mining sector have been the UK, Canada, Australia, and recently South Africa. Most of these companies now are increasing their capability in terms of reequipping old mines, while many greenfield mines are also emerging. In terms of Europe, the notable investors are from Germany and France. In this country, we have a major French producer of cement in Lafarge. Poland has also been a new and keen entrant into our country, interested in a number of sectors. Going further east, Japan for many years has been trading in Zambia. Every other vehicle you see is Japanese. Furthermore, India has continued to be a sustainable investor, as has Singapore. In December 2014, we signed an MoU with the Singapore Investment Center to promote new investments in our economy. We have also recently received strong overtures from the Middle East, including Saudi Arabia, and China, too, is a growing investor. Its investments are broad-based, across agriculture, infrastructure, agro-processing, manufacturing, and others. Turkey has recently come on-stream with strong interest in Zambia. We have enjoyed complete political stability over the past 51 years having seen six democratically elected presidents, boosting investor confidence. And over the past decade GDP growth has averaged at 6.3%, in 2014 approaching 7%.

Which large-scale projects is ZDA supporting?

The farm block program is set to become a major development, and will be replicated nationwide. In addition, the multi-facility economic zones are pulling in notable new investment. Zambian Breweries has established a $32 million malting plant there. This is significant because in the past, Zambian breweries were not producing malt locally. They would get the barley and the farmers would sell the barley to Zambian breweries, but then they would export that to Zimbabwe where they had a malting plant, then reimport it. We were creating jobs in Zimbabwe and losing value because we exported for reimporting. By the end of 2015, the new plant will be ready. In Lusaka south, we also have a major pharmaceutical plant, which is going to be producing medical drugs, which we haven’t done before. In terms of manufacturing, we can see some major developments taking place. Zambia Sugar came to us recently and we gave them a license. They are investing another $120 million to increase their production capacity at the new refinery. We also have a Chinese-Zambian joint venture keen on the cement sector with a $600 million plant.