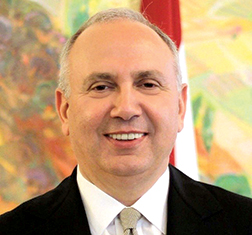 Steady as She Goes

Ziad Hayek was appointed Secretary General of Lebanon’s Higher Council for Privatization by the Council of Ministers in June 2006. Prior to that, Hayek was Chief Executive of Lonbridge Associates Ltd (London), a telecoms and technology investment banking firm. Other positions he has held include: Senior Managing Director of Bear Stearns & Co., President of Indosuez Mexico, S.A., Vice-President of Salomon Brothers, and Vice-President of Citibank in New York. Hayek has an MA in International Management from the University of Texas in Dallas and has studied business administration at the Instituto Tecnológico y de Estudios Superiores de Monterrey in Mexico. He has served on a number of corporate boards in the US, Mexico, Switzerland, and Lebanon. Hayek speaks 11 languages.

Share on:
TBY talks to Ziad Hayek, Secretary General of the Higher Council for Privatization (HCP), on establishing PPPs and how they can help with the sustainable development of the economy.

What are the latest developments concerning privatization in Lebanon, and what initiatives are the Higher Council for Privatization (HCP) currently working on?

The only sector that could benefit from privatization in Lebanon today is, in my judgment, the telecoms sector. Unfortunately, there has not been much progress on that front to-date. The current Minister of Telecommunications has expressed willingness to apply the Telecoms Law and so create an integrated operator, to be called Liban Telecom. We are now waiting for that process to start. On the public-private partnerships (PPPs) front, we are still awaiting the enactment of legislation and have issued a book of guidelines for the tendering of PPP projects in Lebanon. But even though we do not have PPP legislation that mandates international best practice as yet, there is PPP activity going on. Parliament has passed legislation in 2014 to allow the Council of Ministers to license PPP power plants, usually referred to as Independent Power Producers (IPPs). We are waiting for the Ministry of Energy to take the necessary steps to start that process.

What is the importance of PPPs for the sustainable development of Lebanon’s economy?

The importance of PPPs to the economy is tremendous. I personally think that it is the only thing that will make a difference in improving our economy at this point. We are in desperate need of infrastructure and PPPs are exactly designed to finance infrastructure. We need roads, bridges, towers, and telecom infrastructure. We need power plants and dams. We need prisons and public transport. We now have bank assets in Lebanon of about $190 billion of which about $160 billion are deposits. This is a huge monetary mass for a country the size of Lebanon where the GDP is $47 billion. As a result, banks are interested in funding PPP projects; they see it as an alternative to simply continuing to finance the Government on an unsecured, non-recourse basis. We have Lebanese entrepreneurs who have been very active for the past 15 years creating and undertaking PPP projects in the Gulf, Saudi Arabia, and various regions in Africa. We have the need, we have the financing, and we have the entrepreneurs to do it. There are also now 1.5 million Syrian refugees in Lebanon. This situation has led the lowest cost of manual labor in relative terms in the history of Lebanon. We should take advantage of that fact. It creates a win-win situation, where they help us build our infrastructure and we organize their presence in the country. Furthermore, today our economy is based on enterprises that are often family owned, and individual enterprises do not create employment. In order to create jobs in large numbers, you need large projects like infrastructure development. These projects will not only be employing manual laborers but also local architects, engineers, managers, accountants, lawyers, IT people, and admin people. Creating jobs is the main priority for our economy. Not only to create better living standards, but also to stem the tide of emigration. Through emigration we lose our best and brightest, and this has been happening for the past 30 years.

Are public authorities doing enough in terms of improving the framework for investors and promoting the country?

Public authorities need to primarily focus on job creation, which has not been the case because they have been sidetracked in other directions. One of the most important factors in job creation, beside stability and economic growth, is having an investor-friendly environment. In Lebanon, we still have work to do in this regard and the public authorities definitely need to give it more attention. Red tape and complicated and unnecessary procedures are among the elements that still hinder simple matters such as the creation of new companies and the dissolution of old ones. A series of reforms has been identified, which require changes to legislation and are being sent to Parliament for action.