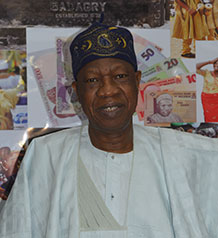 Minister of Information and Culture, Nigeria

Hon. Alhaji Lai Mohammed, a politician, lawyer and Public Relations Practitioner, obtained a bachelor’s degree in French from Obafemi Awolowo University (OAU) and a Law degree from the University of Lagos (Unilag) and was called to the Nigerian Bar in 1986. He co-founded the legal firm of Edu & Mohammed as a senior partner in 1989. He is an active politician and, until his appointment as Minister served as the National Publicity Secretary for Nigeria’s ruling All Progressive Congress (APC). Alhaji Mohammed is a fellow of the Nigerian Institute of Public Relations (NIPR) and worked as public relations officer for almost 10 years with what was then called the Nigerian Airport Authority. He served as Chief of Staff to the former governor of Lagos state, Bola Ahmed Tinubu, and was later appointed and assigned the portfolio of Minister of Information and Culture.

Share on:
"The Nigerian film industry has done much more in marketing Nigeria than the structured efforts of the government."

You recently stated that the government will set up a National Endowment for the Arts (NEA). What type of incentives will this institution offer?

We realized that the creative arts, in particular music, film, culture and literature, are facing challenges due to a lack of institutional funding. Because of that, they have had to think very small until now and were unable to achieve anything of any magnitude. The challenge that creative industries face in Nigeria is piracy within the distribution chain, and that is partly due to the failure of government to protect the intellectual rights of this community. At the base of all this is the fact that unlike other sectors, the arts lack a specific bank or fund, which can be found in other sectors such as with the Bank of Agriculture, where applicants can get funding at a rate that is almost subsidized. In the case of creative industries it is even more challenging as it is an unstructured industry. It thrives on the talents and skills of individuals. What is being achieved today in the music and film industries has been largely done without governmental support. If we are able to support them with the National Endowment Fund we can definitely boost the sector.

What measures is the Ministry implementing to combat piracy?

Piracy is a problem of monstrous proportions. Out of every ten movies eight are pirated. There have been several suggestions as to how to tackle the issue. Our experience in fighting piracy in the entertainment industry is that we cannot continue to fight piracy using the same methods and tools as in the past. Pirates are well funded, motivated, and organized. The incentive is huge because from investing nothing they can make millions of dollars out of the sweat of artists. Piracy is not just restricted to films and music but it goes to books and even goes to cable and satellite television. We need a combination of factors to fight pirates. We need to strengthen the capacity and abilities of all the agencies that fight piracy. The police need to be encouraged and I would recommend a national task force against piracy, as it is a real economic crime. Moving from analog to digital broadcasting will also help because it will make it easier for filmmakers and musicians to release their work directly to the channels, hence unofficial channels will have less success.

Nollywood is the world’s third-biggest producer of feature films. How would you describe the importance of the motion picture industry for the culture and economic development of the country?

The Nigerian film industry has done much more in marketing Nigeria than the structured efforts of the government. With little or no control from the government they have been able to project a positive view of our culture and generate cultural ambassadors. In terms of whether or not it has contributed to the economy, we have not yet been able to put in place a system that can correctly quantify their contribution to the GDP. This has to do with piracy and the distribution structure. Today we do not have more than 60 cinemas around the country and I have been working with various local governments and the post offices to see how we can help with distribution of these products and help filmmakers earn their due. Another problem that the industry has is that the industry is not united. They are organized through guilds; a guild of directors, a guild of producers, a guild of photographers, a guild of cinematographers, and because of this they do not speak with one unified voice. I am working with them to get the Motion Pictures Council of Nigeria (Mopicon) bill passed into law. This will help address the challenges facing them such as piracy, distribution, and funding. I intend to create the Mopicon committee next week with leaders from the various guilds so we can really agree on the draft bill to lobby the legislature and get that law passed.

Several times you have advocated the revival of festivals. What major cultural initiatives can be expected to take place in Nigeria in 2016?

We are trying to create a calendar of festivals. I have asked my cultural department to reach out to their counterparts in all the states and have asked the various directors of culture within the various states to give us a list of at least ten festivals in their state in order of priority and importance. When I have that compendium, I can market the various festivals. So if anybody is coming to Nigeria he or she will have an idea of what festival is taking place at any particular time. I am also working with the British Council and we have a couple of seminars and workshops on the creative industry and part of this concerns conducting research on the various creative industries. Festivals are a veritable source of job creation. For example, it takes 100 people to dress up one masquerade in the eastern part of Nigeria, and another 100 people to undress it. So if that festival is going to last for one week, then it will employ hundreds of people for that week. These are what we are looking into where culture is not just about entertainment but a veritable economy. Creative industries, of which festivals are a part, create a local economy for the local people which will help stem urban to rural migration and help with the main objective of the government and to diversify the economy.