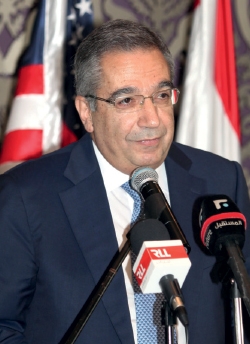 Salim Zeenni is an economist by education. He graduated from Saint Joseph University in Beirut. An industrialist by profession, he runs two plants in the North of Lebanon—one for the manufacturing, packaging, and distribution of consumer care, and the other food industry products to the Middle East, Europe, and North America. He is also involved in Solar Energy and IT. He is a well-know businessman in Lebanon and the Middle East and has served and presided over several business associations including: Former Chairman of the Children’s Cancer Center in Lebanon (Affiliated with St Jude Hospital – Memphis, Tennessee), former President of the Federation of Businessmen Association, former President of the Economic Assembly and former President of the Lebanese American Businessmen Association. He is currently President of the American Lebanese Chamber of Commerce (AmCham Lebanon).

Share on:
What role have you played at AmCham to ensure that such trade links and business relations have been developed and come to fruition? We played a major role with the […]

What role have you played at AmCham to ensure that such trade links and business relations have been developed and come to fruition?

We played a major role with the help of the US Embassy here in Beirut and the Lebanese Embassy in Washington, DC. There was a push to improve this relationship and trade between the two countries. Historically, the number one trade partner with Lebanon was always either France or Italy. Why? This is a trend. Nowadays, most of the time you cannot ask why you are consuming McDonalds, for example, and not buying from Paul. It is a trend in the market, especially with the youngsters. There is an image of the American way of life. It is a whole cultural movement that is happening. Do not forget the education side of it, such as the American University of Beirut (AUB) and other US schools and universities. There are plenty of forces that are channeling people toward consuming American goods that built up over the years. It took years, and we definitely went through ups and downs, especially during the war with Iraq and the problem with Kuwait. But after that it picked up like crazy. In French they call it “boule de neige”—it means there is a snowball effect. Once it begins growing, it grows faster and faster.

What would you say are the most active committees today at AmCham?

We have several, but mainly the most active are the banking and finance committee, and the events committee, which is planning different activities that we do in Lebanon and the US, including our lobbying mission. We do one every year and actually at the moment we are preparing for our “Lebanon Day in the USA,” which will be held in New York in November, to which we will bring the flagships of Lebanese industry and exports, including the successful wineries, jewelers, fashion designers, the IT sector, as well as the food and beverage sectors including ethnic foods, which are well developed in the US. Lebanon Day aims to promote all of these sectors in the US market by highlighting the most successful products and companies from Lebanon. It will be a major event with a conference, sector specific roundtables, business luncheon, and a spectacular gala dinner.

How is AmCham working to harness the financial sector and maximize its appeal to US and foreign investors?

The banking and finance committee does not focus only on direct investment. In Lebanon, you cannot tell people how to spend. It is not really chaos, but a kind of positive chaos. People really pick up on different sectors and know where to invest. It is a question of the period in time, and how the market is fluctuating at that point. You cannot really direct them. You can only give them the incentive and the guidance when they are going to invest in Lebanon. In this committee, we play a certain role in promoting external investment in Lebanon.

What other strategic areas for investment in Lebanon are you promoting?

Lebanon is known for several sectors, but one of the major areas is in services. That is the major part of the economic picture. The investment in start-ups has also grown very quickly, and the ICT sector is amazing. You do not see it or feel it but when you know about it, it is quite something. IT is creating plenty of new jobs. In real estate, there was a small slow down, but the majority of consumers are now in a better mood than they were a year ago. And there is the industrial sector. This is a sector that exports nearly $5 billion a year. For a country like Lebanon, if you want to compare that figure to other countries, then we are very well positioned.