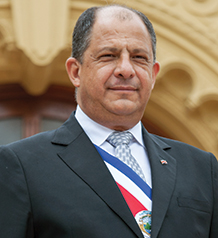 Luí­s Guillermo Solí­s Rivera has been President of Costa since 2014. Previously, he worked as a foreign ministry official from 1986 to 1990, and played a key role in drafting a Central American peace plan brokered by Costa Rica’s former President Oscar Arias Sanchez. He has also served in delegations to the UN, the Organization of American States, and the EU.

Share on:
TBY talks to Luí­s Guillermo Solí­s Rivera, President of Costa Rica, on the significance of relations between his country and Peru.

Starting from December 2015, travelers both from Costa Rica and Peru will not require a visa to visit either country. What is the importance of this bilateral agreement and how will it impact Costa Rica’s tourism industry?

As a result of the realignment of the principal developed source markets for visitors to Costa Rica, the government chose to promote the country as a novel destination in new markets. Costa Rica has selected the largest Latin American countries, whose economies have seen notable growth in recent years, as the focus of this new endeavor. Of those countries, Peru stood out and our government took the decision to eliminate visa fees for Peruvian citizens. This bilateral agreement came into effect in mid-December 2015, and as a result there has been a significant increase in the number of Costa Rican and Peruvian visitors to both countries. From now on, Costa Rica will begin developing a comprehensive promotional campaign through Peruvian media and social networks with the aim of presenting the rich natural attractions of Costa Rica. In addition, these methods should be accompanied by improved facilities for air connections between both countries.

What specific segments of the Peruvian economy are particularly appealing for Costa Rica’s community of investors?

The development of economic and commercial relations between Costa Rica and Peru have, since the implementation of the bilateral Free Trade Agreement in mid-2013, grown considerably. Costa Rican exporters have found a market with an attractive level of sophisticated demand for healthy, value-added food products, as well as sanitary and cleaning products. This has had a significant effect on the positioning of Costa Rican goods directed at the needs and demands of the Peruvian middle class, which enjoys a remarkable purchasing power. In terms of the sectors of the Peruvian economy that are most attractive to Costa Rican investors, the growing presence of Costa Rican companies that have managed to set up a base in Peru should be noted. These Costa Rican investments can be found in sectors as diverse as food, industrial packaging, domestic electronics, and advanced technology.

The Pacific Alliance trade bloc creates synergies between leading countries within Latin America. What is the government’s strategy to deepen relations with Peru in order to support Costa Rica’s access to the Pacific Alliance?

One of the consistent pillars of Costa Rica’s economic policy is to strive for increased involvement and growth in international commerce. Costa Rica has signed and is part of 14 free trade agreements, and these cover the majority of its commercial members, out of which agreements with four member countries of the Pacific Alliance stand out. Costa Rica aims to deepen its connection with the group, with the aim of strengthening its relations with its member countries and particularly in order to develop a strong policy with regard to the countries of the Asia Pacific.