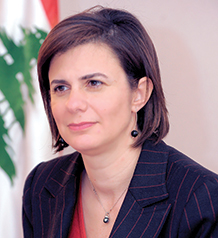 Raya Haffar El Hassan holds an MBA in finance and investments from George Washington University and a bachelor’s degree in business administration from the American University of Beirut. From November 2009 until June 2011, she served as Lebanon’s Minister of Finance, the first female in the Arab world to assume such a post. She was appointed Chairman-General Manager of the Tripoli Special Economic Zone in 2015 and currently serves on the advisory committees of the UNDP Arab Human Development report, the Rafik Hariri University-Business School, and the Beirut Arab University-Northern Branch. She is also a member of the Board of Directors of BankMed, MedInvestment Bank, and Saudi Lebanese Bank.

What were the main advantages that Tripoli offered as a location for the TSEZ?

Tripoli is the second-largest city in Lebanon, with plenty of untapped human and natural resources. Its location is right next to the Port of Tripoli, the second largest port in the country, which has recently undergone an expansion. Trading activity in Tripoli has increased significantly over the past few years, with more shipping companies choosing the port as their berthing point. Also, it is the gateway to the Levant and the Euro-Mediterranean economic zone, the entry port to Turkey, and the connection through Syria to the Arab hinterland, an area of opportunity we look forward to exploring once the situation there improves. Tripoli also has the Rachid Karami Trade Fair, a 1 million sqm plot of land sitting in the middle of Tripoli that has not been properly exploited yet. Tripoli is well placed in terms of transport routes, capacity, and installations, and offers an excellent platform for attracting investments into Lebanon.

How has the TSEZ project brought the business community of Tripoli together?

Across the political spectrum, everyone seems cognizant that the TSEZ is one of the most important projects taking place in Tripoli today. Regardless of what party you are from, the project is known to be crucial. Tripoli is in a dismal state due to the lack of a manufacturing industry, little economic activity, and because the few economic sectors present there are not diversified. This project presents a rebirth for the region and the business community is aware of that; people realize the TSEZ has the potential to attract investment and start a new chapter for the north of Lebanon.

How will the TSEZ differ from the Beirut Free Logistics Zone?

The Beirut Free Logistics Zone is a pure free zone with a customs-free zone and some incentives for traders, importers, and exporters, but with no developmental implications. On the other hand, the TSEZ has been given the authority to set up its own procedures and provide a streamlined business environment. We will provide state-of-the-art infrastructure with all the utilities, amenities, IT, broadband, and transport infrastructure. What we will have here in Tripoli does not exist anywhere else in Lebanon at the moment, so it will greatly contribute to the country’s development process. We want to bring the much-needed employment and socioeconomic development through the TSEZ, not just for Tripoli but all of northern Lebanon.

What will be the major benefits from TSEZ for the north of Lebanon?

The transformation of Tripoli started with the revitalization of the port. Now, there is an opportunity to have Tripoli play a significant role as a platform for logistics, warehousing, and transshipment activities. We want to supply value chains from here and that would require prepping the local economy, such as training the local workforce by fostering high-skilled labor, and opening up the market offering for companies here. Also, the Lebanese government is about to pass two decrees to regulate oil and gas exploration. This will hopefully pave the way for gas and oil exploration off the shore of Lebanon. The TSEZ can become attractive for downstream and upstream oil and gas companies. Finally, there is the Syrian factor. The international community is preparing for the post-conflict period in Syria and Tripoli is the closet city to the border; therefore, we want to make the TSEZ an incubator for the reconstruction process. The government, local community, and private sector have to rise to the challenge and help prepare the local economy to be up to standard to benefit from this. The process has moved forward, and today we have the backing of the Secretary General of the UN and the President of the World Bank. We have received funding from the Arab Fund for Economic and Social Development, the World Bank, and the UNDP.