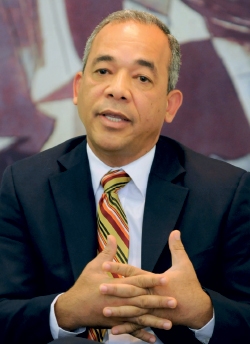 Rubén Jiménez Bichara has studied extensively in a range of international institutions, including the University of Burgundy in France, the New York University of New York and Columbia in the US, and the Universidad Católica Madre y Maestra in Santiago. He has worked in positions with various Dominican and international firms such as the Corporación de Fomento Industrial, the Cooperativa La Telefónica, Empresa Distribuidora de Electricidad del Sur (EDESUR), Centro de Desarrollo y Competitividad Industrial (Pro Industria), and the Empresa Distribuidora de Electricidad del Este (EDEESTE).

Share on:
What are some of the energy related reforms implemented recently by the Dominican government, and how have they impacted the market? For the past 20 years we thought that in […]

What are some of the energy related reforms implemented recently by the Dominican government, and how have they impacted the market?

For the past 20 years we thought that in order to make the energy system more efficient we should increase tariffs and reduce costs. However, that did not prove to be the right approach, as we came to understand that the change in the energy production matrix was the factor contributing the most to the better development of the market. Today, 60% of the electricity the Dominican Republic consumes is indexed at prices similar to those of oil, which means that production costs are high and competitive levels low. We are working on the transformation of large fuel-based plants into natural gas and carbon-based facilities, as well as the construction of a natural gas plant to supply the future needs of the country and the electricity energy generation sector. Only once we achieve the transition in the energy production matrix will we be able to reduce costs and tariffs.

How does the CDEEE strike a balance between the interests and demands of end users and distribution companies?

Were we to transfer the entire cost of the energy generation process to the clients, some customers would be required to pay 160% more than what they currently do, which would be unsustainable. The only way to make the entire process more efficient is by reducing generation costs and the overall deficit of the industry, which reached around $1.3 billion by the end of 2013.

What are some of the biggest challenges to the combining of efforts between electrical energy generation and distribution companies?

The National Integrated Plan is aimed at doing precisely this, and bringing closer both the public and private sectors to achieve common goals. For example, we currently implement 82 projects at the national level to upgrade and rehabilitate the electricity network, as well as to install better metric counters. The above-mentioned plan is around 50% focused on the production sphere, 35% on the losses of the distribution channels, and 15% on management efficiency. These processes will take up to five years. Meanwhile, we are also encouraging renewables, and have 1,500 MW worth of tenders under consideration.

What is the impact on the entire system of providing electrical energy to key industrial sectors such as mining?

It is hard for public authorities to keep up with the current pace of development of the national industry, and future demand trends are not at all optimistic, with research studies indicating that we must urgently install between 600 MW and 1,400 MW to meet the future demand of the industrial sector. In this context, the government has already taken the lead by sponsoring the development of the first 600 MW carbon-based plan to address future demand issues. Additionally, we are looking into potential natural gas based projects to cover the remaining 800 MW shortfall. Our goal is also to attract back into the system those companies that are currently auto-generators, as that is a factor that currently reduces competitiveness, especially at the export level.

Are there any future plans for the commercialization of electrical energy?

The main goal in this field is to reduce losses, as that will provide distribution companies with a better cash inflow from collections, enabling them to target future expansion and upgrading plans with their own resources. At the moment, we require international financing to defray the costs of such plans to reduce losses. We have implemented both public and private initiatives to strengthen commercialization, and are open to analyzing any potential plans to privatize the electricity commercialization of areas that could benefit both company and country.