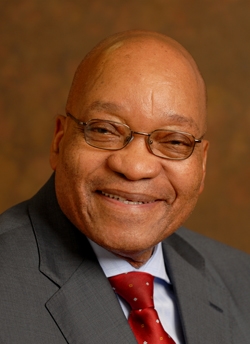 President, the Republic of South Africa

Influenced by a trade unionist family member, Jacob Zuma became involved in politics at an early age, joining the ANC in 1958. He became an active member of the ANC’s armed wing, Umkhonto we Sizwe, in 1962, following the banning of the ANC in 1960. While on his way out of the country in 1963, he was arrested and sentenced to 10 years’ imprisonment. He left South Africa in December 1975 and for the next 12 years was based in Southern Africa. Following the unbanning of the ANC in February 1990, he was one of the first ANC leaders to return to South Africa to begin the process of negotiations with the then apartheid regime. In 1991, at the first ANC conference held in South Africa since 1959, he was elected Deputy Secretary General. He was elected ANC Deputy President in December 1997, and served as Deputy President of South Africa from 1999 until June 2005. Zuma was elected ANC President in December 2007, becoming the ANC’s candidate for South African president in the 2009 elections.

Share on:
"Africa looks forward to the expansion of trade as well as inward investment into its myriad investment opportunities with the GCC."

South Africa and Saudi Arabia are both high growth G20 economies. Since 1994, when Nelson Mandela visited Saudi Arabia and began diplomatic relations, how have trade ties between the two nations evolved?

Since the visit of former President Nelson Mandela to the Kingdom of Saudi Arabia and the establishment of diplomatic relations in 1994, trade ties between the two countries have steadily progressed. Former President Mandela described Saudi Arabia as an important and influential country in the Middle East, and it remains a valued and strategic partner for South Africa in the region. This is underscored by the fact that Saudi Arabia is currently South Africa’s major supplier of oil. Our oil imports from Saudi Arabia totaled ZAR72.903 billion ($6.87 billion) in 2013, representing about half of our total crude imports. The reality is also that our reliance on Saudi crude has led over the years to a significant trade deficit between the two countries. The focus is currently on encouraging a significant increase of exports to the Kingdom in order to offset the trade deficit.

In 2012, a ZAR20 billion joint investment fund, the Saudi Arabia-South Africa Holding Company, was established with investment in priority sectors, including mining, petrochemicals and agro-processing being its main focus. In addition, the South African government offers an array of incentive schemes to stimulate and facilitate the development of sustainable, competitive enterprises by providing accessible incentives that effectively support national priorities. A variety of incentive schemes seek to support the development or growth of commercially viable and sustainable enterprises through the provision of either funding or tax relief, thereby ensuring the creation of new and sustainable jobs. The government of South Africa and its private sector therefore encourage international investors to explore and favorably consider the major investment projects in South Africa, which will ensure high-levels of returns on their investments.

“Africa looks forward to the expansion of trade as well as inward investment into its myriad investment opportunities with the GCC.”

How would you characterize the importance of Africa-GCC trade to both parties in light of the continuing economic recovery in developed markets?

Africa looks forward to the expansion of trade as well as inward investment into its myriad investment opportunities with the GCC to help it overcome the challenges of security, poverty, inequality, and unemployment. Africa is a fast-growing region and government-private partnership deals to boost trade and investment with the economically strong GCC region would be to their mutual benefit. The GCC countries have the major benefit of having extensive capital in the billions of US dollars in their sovereign wealth funds (SWFs), which are used for investments abroad. The African continent with its high growth now and into the future will present the GCC member states and their SWFs with opportunities for high returns on their investments. The expansion of inter-Africa-GCC trade and investment go hand-in-hand in benefitting the long-term advantage of the peoples in both regions.

Where do you hope to see relations and trade between South Africa and Saudi Arabia in the year 2020? What initiatives are pushing those ambitions forward today?

We fully expect that the bilateral trade deficit between our two countries will have lessened considerably with increasing use being made of the high-quality South African goods, products, and services in the Middle East. We also expect that the level of inward investment into South Africa from Saudi Arabia and the Middle East region will have increased considerably given the highly lucrative returns that such investments will reap. The existing Economic, Trade, Investment and Technical Co-operation Agreement with Saudi Arabia and the annual Joint Economic Commission between the two countries will continue to provide the framework and structural mechanism through which multi-faceted bilateral relations are promoted, with a specific focus on the promotion and strengthening economic, trade, and investment. South Africa is open and ready to do business and we will remain so.