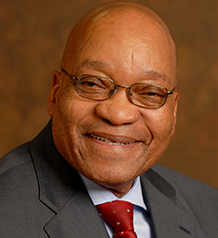 Jacob Zuma became an active member of the African National Congress (ANC) in the 1950s. He was arrested in 1963 and sentenced to 10 years imprisonment on Robben Island. In 1973, he continued his activities in exile in southern African countries. In 1999, Zuma was appointed Deputy President of the Republic and assisted former President Nelson Mandela as Burundi peace mediator. He was inaugurated as President of the Republic for his first term in 2009 and assumed his second term in office in 2014. His priority during this second term is to mobilize society behind the 2030 Vision outlined in the National Development Plan, the country’s socioeconomic development blueprint.

Share on:
TBY talks to Jacob Zuma, President of the Republic of South Africa, on his recent visit to Tehran, boosting economic growth, and Iran's role as a trade partner for African countries.

How would you assess your visit to Iran and meeting with President Hassan Rouhani in April 2016?

The purpose and strategic objective of the visit I undertook from April 23-25 to the Islamic Republic of Iran was aimed at elevating bilateral political, economic, and person-to-person relations between the two countries into a substantive strategic partnership that will benefit both countries and their peoples. To this end, my visit reaffirmed the South African government’s unwavering support for the people and government of Iran as they enter the post-sanctions period. We agreed with President Rouhani that we need to translate the strong relations that exist between our countries into tangible projects, particularly in trade, investment, and economic sectors. Indeed, during that visit, we signed eight MoUs ranging from energy to investment to insurance that will serve as a catalyst to fast track economic and trade relations. We also agreed to set up a special high-level mechanism to realize this goal.

Both sides have expressed their willingness to boost bilateral ties. What are the possible main areas of cooperation between South Africa and Iran?

There are vast areas wherein we could potentially cooperate, but for the immediate future we have agreed to work together to create an institutional framework that will allow for the free movement of goods and services between our countries, particularly in financial services, mining, energy, and tourism. A number of business projects in various sectors are also in the pipeline. Since my visit, a number of departments, including trade and industry as well as the private sector, from both South Africa and Iran have begun negotiations in hopes of laying a solid foundation for trade. Some of those negotiations have reached their final stages, and companies from both sides are ready to conclude deals. All these are part of a long-term strategic plan to strengthen bilateral economic relations. We have also emphasized the need to cooperate at the multilateral level, especially on issues of mutual interest. South Africa and Iran share the view that there is a need to transform global institutions, to make them more equitable, just, people centered, and development oriented. Following the nuclear agreement, we expect Iran to play a leading role in the region, especially in contributing positively to finding lasting solutions to regional challenges.

How will this new relationship between South Africa and Iran boost economic growth in both countries?

The relationship between South Africa and Iran is not new. Iran was South Africa’s top trading partner in the region before the imposition of unilateral sanctions. As countries that are almost at the same developmental stage, the economic relations that we seek to re-establish with Iran are based on equitable trade. Those relations will be based on state-to-state cooperation, business-to-business engagements, and people-to-people relations. During my visit, we identified a number of sectors where there are huge opportunities, including oil, gas, petrochemical products, mining services and technology, chemicals, pharmaceuticals, medical equipment, and heavy industry, as well the export of agricultural products such as citrus fruit and red meat to Iran by South Africa.

What is the importance of Iran as a trade partner for African countries?

Iran is a highly diversified and sophisticated energy giant with a great record in broad-based development. We are pleased that Iran is working on an Africa strategy to increase its profile and involvement on the continent and we look forward to a strong Africa-Iran development partnership emerging in the near future. Of course, we agree with Iranians that South Africa is the ideal strategic entry point for Iran to access the African market. South Africa is also of the view that Iran is an avenue for South Africa’s export products into the Middle East. This is especially important given South Africa’s economic diversification strategy, as we confront the challenges posed by the international economic climate.