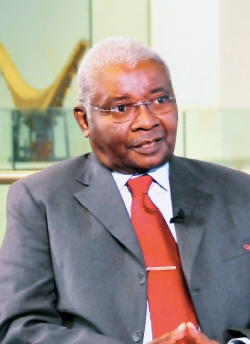 Armando Guebuza became Interior Minister in the Samora Machel government and later represented the government of Mozambique in the joint Supervision and Monitoring Commission, an arm of the General Peace Accords, as the country headed toward the first general elections in 1994. He was chosen as the Mozambique Liberation Front (FRELIMO) candidate for the Presidency and became the President of Mozambique in February 2005.

Share on:
On October 4, 2012, we celebrated the 20th anniversary of peace, dialogue, tolerance, and reconciliation. On this 20th anniversary, we are a people who continue to build a nation of […]

On October 4, 2012, we celebrated the 20th anniversary of peace, dialogue, tolerance, and reconciliation. On this 20th anniversary, we are a people who continue to build a nation of prosperity and wellbeing in peace.

We continue with the promotion of dialogue within all sections of society, especially among political parties, the clergy, and business and professional organizations in seeking broad consensus to continue to build a united and prosperous nation that enjoys social harmony.

In the context of foreign policy, we successfully welcomed the 32nd Summit of the Southern Africa Development Community (SADC) Heads of State and Government and the Comunidade dos Paí­ses de Lí­ngua Portuguesa (CPLP) to Mozambique. After hosting these events, we will assume the rotating presidency for the 2012-2013 period and the 2012-2014 period, respectively.

“Our homeland holds great potential in natural resources, with an emphasis on fishing, hydropower, forestry, and mining.”

Our homeland holds great potential in natural resources, with an emphasis on fishing, hydropower, forestry, and mining. Resources are of great strategic importance in the fight against poverty through the impact that exploration will have on improving the quality of life of our wonderful people. The existence of natural resources does not mean, in itself, development. It does not mean instantaneous wealth. The discovery of natural resources is a promise of development. This promise still needs to be fulfilled. Indeed, it should follow a timeline that goes from discovery and identification to the preparation of technical, financial, and logistical procedures, right up until the products are placed on the market. Translating the development of natural resources into wealth can be a long process. There are as many as 23 billion tons of coal in Mozambique, but current production is only 4 million tons per year. This amount is still a long way off the 50 million tons that we intend to achieve in the medium term. The great promise of progress can catapult the Mozambican economy to new heights—heights that will bring with them the realization of collective expectations for improved standards of living. What can be said of coal is also valid for natural gas and other natural resources. In relation to natural gas, our annual capacity to produce has risen from 120 million to 183 million gigajoules (GJ). However, we are able to considerably increase this capability thanks to recent discoveries that put Mozambique among the top 10 countries in terms of reserves. The discoveries also offer the promise of development, which will impact our lives through the participation of Mozambicans. A correct identification of the structural challenges and the establishment of a proper strategy to overcome them are the real key that will enable the achievement of the better future we all seek—a Mozambique that is both free of poverty and increasingly prosperous.

The amount of discovered resources, ranging from coal to natural gas through a variety of other natural resources, including forests and water resources, are challenging the country in new ways. These areas of economic development will require huge numbers of professionals from various specialties. An important step toward addressing this challenge was the approval of a strategy to shape and build human resources capacity between 2010 and 2024, which envisages the training of technicians, especially in the geosciences. Recognizing the importance of developing human capital to sustain Mozambique’s socio-economic development, we have implemented, with the participation of social partners and civil society, the broad Education Reform Program, which aims to change the current paradigm of vocational training so that it fits the current needs of the labor market. The involvement of the productive sector is also fundamental in ensuring sustainability in the system. In this regard, the government encourages the participation of companies in the finance sector through the various mechanisms established, including the development of partnerships between businesses and training institutions.

To complement the other activities of formation, we have ensured, through a strategy on employment and vocational training, the training of technicians to meet the challenges that the sustainable exploitation of natural resources raises. In this context, there have been over 30,000 beneficiaries in areas such as industrial maintenance, mechanical and electrical engineering, and metalworking.

Another challenge identified in order to facilitate the achievement of development and the promise of more wealth following the discovery of natural resources is growing the capacity of the public sector for good governance. In fact, the institutions of the state are challenged to enhance their ability in planning, direction, program implementation, and supervision of autonomous and private institutions.

A further challenge is to realize the promise of wealth that the discovery of natural resources implies, and the creation of a flourishing Mozambican middle class. But to achieve this, we need to overcome a series of obstacles. Firstly, there is arequirement from the natural resources industry for goods and services currently absent from our market. Secondly, for a large part, the experience of our businesses is still embryonic with regards to conception, feasibility, and management. There is also a lack of capital among our businessmen to invest in projects of great scale. With the creation of ENH Logistics, we want to provide logistics services to the hydrocarbon sector with Mozambican capital, securing the training of domestic staff and the creation of local competencies. Our vision is that in the long term, Mozambicans will be the overwhelming majority in these business units. In the same framework, we will create an institution dedicated to logistical services in the mining industry, which will be the vehicle through which we ensure Mozambican participation in mining. Similarly, we have been encouraging associations and trade unions to continue to expand opportunities for social dialogue. We have also been working toward the resolution of labor disputes at all levels in the workplace, seeking harmonized solutions to day-to-day challenges. Also, during the formation of the middle class in Mozambique, we will continue to support private sector development through the consolidation and improvement of the legal and institutional framework on markets and prices.

Total state revenues in 2013 will be reflected in the recently approved state budget for the year, which represented growth of around 19%. It corresponds to around 24% of predicted GDP for 2013. The contribution to mega projects from state revenues from January to November 2012 stood at around MZN5 million, equivalent to 5.5% of total revenue collected. This is 91% higher than over the same period in the previous year. The target of the majority of these investments was the natural resources sector, including hydrocarbons and minerals. The sector was the recipient of MZN3.5 million, equivalent to 4% of the total. We forecast that in 2013 such investment will amount to 6% of total state revenues, representing a 33% increase compared to 2012. In this matrix, state contributions to the natural resources sector have risen to 4%, representing a 34% nominal increase compared to 2012. In 2004, 52% of the state budget was covered by internal resources. In 2012, we expect this figure to be 61% and to rise to 67% in 2013. This increasingly growing share of internal resources in the state budget demonstrates the successful effort that the government has been making to stimulate economic activity that forms the basis for taxation. The economic growth fueled by the exploitation of all natural resources that are being discovered generates an increased challenge to Mozambican society. The challenge is now to transform this growth factor into the constant improvement of living conditions, which depends on the adoption of mechanisms of redistribution of income criteria that integrate social justice and sustainability. The goal in this process of redistribution is to bring services closer to the citizens. At first, the redistribution of income from natural resources occurs with the ever-increasing absorption of Mozambicans into the workforce engaged in the exploration of these resources directly and indirectly through businesses that are being established to provide services. The young are the greatest beneficiaries of these jobs. Many are young entrepreneurs who, using their creative initiative, are taking advantage of the opportunities for job creation and self-employment. Additionally, redistribution occurs through tax mechanisms. Fees and taxes that the government collects from the extractive industries are applied to the provision of basic social services, for example, in education, health, the construction of economic infrastructure, public safety, and the provision of public services. The exploitation of natural resources to catalyze the growth of other economic sectors can be exemplified by looking at the tourism sector. Despite the global economic crisis, there has been an increasing number of beds. Thus, in 2011, we reached a threshold of more than 40,000 beds compared with just over 30,000 in 2010.

With satisfaction, we also note the increasing number of our fellow citizens with access to mobile phone services—from almost 8 million users in 2011 to well over 9 million in 2012. The Green Revolution and plans surrounding it also predict average annual growth of 7% and the duplication of global production in the next 10 years. Thanks to our commitment and performance, as a people, we have become self-sufficient in crops such as cassava and maize. More importantly, we used to import emergency food aid. Now, we are exporters of agrarian products that are “Made in Mozambique,” such as bananas, which we export to South Africa and the Middle East, sugar, which we export to Europe, cotton, which we export to Asia and Europe, cashews, which we export to Asia, Europe, and the US, and sesame seeds, which we export to Asia.

Financial institutions present themselves as our partner in the implementation of the redistribution process. In this context, we see the expansion of the branch network inside Mozambique, the number of which has grown to 150 branches from 126 in 2010, as a success. As a result of this development, we have 18 commercial banks, seven credit cooperatives, and 191 micro finance institutions, a mesh that ensures the existence of at least one institution in all provincial capitals, in 66 of 128 districts, and in 43 municipalities, which contributes to the increase of the formal economy and higher savings.

The achievements made by each and all of us in the fight against poverty, until now, encourage us to continue being grounded in national unity, self-esteem, justice, peace, and multiparty democracy. We therefore reaffirm our determination to continue to develop multiple measures to streamline the implementation of our economic and social plan for 2013.