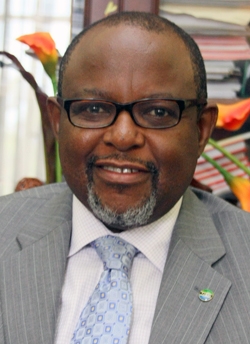 Chief Secretary to the President, Tanzania

Ombeni Y. Sefue was Permanent Representative to the UN from 2010 to 2011, Ambassador to the US from 2007 to 2010, and High Commissioner to Canada from 2005 to 2007. He has also served as Counselor in the Embassy of Tanzania in Sweden and worked as a speechwriter and assistant to two previous presidents of Tanzania. He holds a degree from what is today Mzumbe University in Morogoro, a Master’s degree in Public Policy and Administration from the Institute of Social Studies (ISS) in The Hague, and a graduate diploma in International Relations and Diplomacy from the Tanzania-Mozambique Centre for Foreign Relations in Dar es Salaam.

Share on:
"We strongly believe that the government should be more open to its citizens."

How successful has the e-government initiative been so far in regards to its goal of increasing efficiency?

Let me put it this way, the E-government Agency (e-GA) is a fairly new government institution; it is only about two years old. But we began to leverage ICT for improved service delivery and efficiency even before e-GA was created. There have been some successes such as the Integrated Financial Management System and the Human Capital Management Information System. What e-GA is doing is to accelerate, improve, coordinate, and expand these efforts. We want to improve efficiency, to make the government more accessible and accountable to the general public, as well as to streamline, harmonize, and coordinate ICT in government. We also want to establish various standards for ICT applications across government departments, build capacity in ICT among the various ministries and departments, and install the related infrastructure. We already have in place the ICT optic fiber broadband backbone, and are now working on last mile connectivity issues to ensure we can connect as many government offices as possible. We are working on an integrated government-wide network to bring the whole government together and avoid unnecessary duplication and parallel systems. We are trying to create a closed government cloud that is accessible 24/7, along with a dedicated and secure government mailing system. Overall, we are fairly on track to achieve these targets. We are also trying to create a government service mobile platform so that citizens can access services on their mobile phones, which most people today have access to, without having to visit government offices. Not only will this save time and money for both citizens and the government, but by minimizing face-to-face contact between citizens and government officials we can reduce the opportunities for corruption.

How has the increase in e-governance benefited Tanzania’s open government initiative?

Tanzania joined the open government initiative in 2011 because we strongly believe that the government should be more open to its citizens and, really, to have a more interactive government with an ongoing dialogue with its citizens. We believe in open government, and much of what the government does should be accessible to the public. In so doing we will empower the public to hold the government accountable. My other wish is that one day, for instance, a farmer will be able to use his mobile phone, take a picture of a crop that is not doing well, and upload it to agricultural extension officers, enabling the officers to provide a solution promptly. Or, if there is a water point in a city or rural area that is not working, someone can take a picture and upload it to the relevant officials who can locate it by GPS and arrange for immediate repair. This possibility is now not too far off, either. The technology is there; we just need to implement it. There is a cost in terms of human and financial resources. Yet, efficiency gains will ultimately compensate for the costs.

“We strongly believe that the government should be more open to its citizens.”

Tanzania also recently began implementing the Big Results Now (BRN) initiative. How would you rate the progress of the first year of this program?

I think we have made very good progress considering the teething problems we encountered. We agreed as a government that this is what we are going to do and that we will closely monitor performance in Key Results Areas (KRAs) on a weekly basis to make sure that those implementing priority projects are always on track. This also helps to identify and resolve problems early on. The main problem was financing. Our philosophy is that a plan without a budget is only a draft. There is no point in giving someone Key Performance Indicators (KPIs) without the money to meet those targets. We identified six main KRAs. These are agriculture, education, resource mobilization, energy, central transport corridor, and water. We have just added a seventh KRA, which is business environment. I think we have done quite well in most of these priority areas. The latest evaluation results confirmed unprecedented performance, and attribute this to the new way of doing things. In education, for instance, we had intended to re-train about 3,500 teachers in new ways of delivering the curriculum and we have managed to train about 3,000, so we are almost on target and are beginning to see results in terms of school performance. With water, by June of 2014, after only one year of BRN, we were able to provide 2.8 million people in rural areas with connections to clean water. This is at least five times the highest rate we have ever achieved since independence in providing clean water to our citizens in a single year. Resource mobilization has helped us reduce the fiscal deficit from TZS6 trillion to TZS5.648 trillion because of the identified new sources of revenue. In energy, by June 2014, 36% of the population had access to the power grid. The connection rate is now at 24%, compared to only 10% in 2002 and 13% in 2007. The biggest jump occurred after we began to implement BRN.

What are your priorities for 2015?

I would say one of the priorities is national stability in the country—peace and stability. We live in a rather unstable region, whereby our chief concern is to make sure that Tanzania remains a peaceful and stable country—socially, politically, economically as well as in terms of security. We are a united country; religion is a person’s private matter, as are political views or tribal affiliations. We want to remain united, peaceful, and stable. We are also working toward sustaining the economy’s growth trajectory of around 7%, a rate we have on average attained for over ten years now. In 2015 we may see 7.2% growth if we keep all our macroeconomic fundamentals in place, such as low inflation of around 5% or less by June 2015. In other areas, we want to address obstacles to growth, such as infrastructure. Most of these obstacles to growth are factored into the BRN initiative. In energy, we need adequate, stable, reliable, clean, and affordable power. We are continuing to build roads across the country. We are building more roads now than we have ever done. We are fixing the existing central railway line even as we plan an entirely new standard gauge line. With a country the size of Tanzania, the opportunity is huge, but we have to build infrastructure for that opportunity to be realized. We are now building Terminal Three at the Julius Nyerere International Airport in Dar es Salaam, and there are other airports in other cities earmarked for development in 2015. I am extremely excited by the huge progress we are set to make over the next few years. An area we will keep a close eye on is natural gas. With over 50 tcf of gas discovered, and hopefully more to come, we can restructure and diversify our economy and build the foundations of a strong and resilient economy that can outlive these finite resources. We will continue to internalize global best practices in our policies, laws, and regulations to ensure we get this right. Next year is also an election year, so the priority here is to have a peaceful, free, and fair election and eventual transition to the fifth post-independence administration.

With some 10 years left to achieve Vision 2025, how optimistic are you about meeting the set goals, especially considering the progress of recent years?

I think we are going to get there. I am optimistic when I take into account what we have achieved so far, especially in the last few years. The reason we introduced the BRN initiative is because we began to worry that we wouldn’t meet the targets. Now, with BRN, I am very confident that we will succeed. For example, the economy is growing at an average of 7% per annum, which is strong growth, and I am sure it will reach 8% in the near future. In per-capita income terms, it was $652.1 in 2012 ($742 in current US prices). But, we are now rebasing the data. From the initial figures we have, this will increase GDP substantially. The World Bank is trying to validate the numbers, but by September we should have the new GDP data. We expect the new data will confirm that we are now on track to becoming a middle-income country by 2025. Other important numbers include the extreme poverty rate, which was 9.7% in 2012 compared to 16.6% in 2007. People living below the basic needs line amounted to 28.2% in 2012, down from 33.6% in 2002. All this shows that we are on track, and all numbers point in the right direction. Life expectancy is now at 61 years, up from 50 years in 1988. Literacy is at 78.1%, up from 69% in 2002. When we look at these numbers, and with the commitment we have, we have every confidence that we will meet our 2025 targets. The future is optimistic.