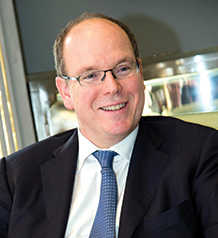 His Serene Highness Prince Albert II is the son of Prince Rainier III, Louis Henri-Maxence-Bertrand and Princess Grace, née Kelly. HSH Prince Albert II succeeded his father, Prince Rainier III who died on April 6, 2005. On July 12, 2005, at the end of the period of official mourning, the Prince’s accession to the throne was celebrated. He is a keen believer in education, and has studied Political Science, Economics, Psychology, English Literature, the History of Art, Anthropology, Geology, Philosophy, Sociology, German, and music at Amherst College, Massachusetts, US. He is also a advocate of sport and has completed at no fewer than five Olympic Games from Calgary in 1988 to Salt Lake City in 2002 as a member of the national bobsleigh team. A member of the International Olympic Committee since 1985, he is President of the Monegasque Olympic Committee, and Honorary President of the International Union of Modern Pentathlon and the International Athletics Foundation. HSH Prince Albert has travelled all over the world including visits to France, Italy, the US, Russia, the UK, Germany, Japan, and China. In these countries the principal heads of State and political and economic leaders received him. At the same time, he receives credentials from over 50 countries, which now maintain diplomatic relations with the Principality.

Share on:
"Azerbaijan has developed incredibly over the past few years."

What do you think the 2015 European Games will add to the continent’s sporting landscape, and what does this event signal about the future of global sports?

There were many people, including myself, who at the onset felt that Europe already had a lot of continental championships. Why overcrowd the calendar with another major international sports event? However, after rethinking and talking among ourselves in the Olympic world, I believe the European Games are on par with the general tradition and trend that every continent should have a regional games or a continental games. There are, of course, other types of multi-sports events, but it is fair that Europe has their own continental games. The only worry that we have to address is, of course, managing athletes in different sports who already have busy seasons, with other world championships and regional games elsewhere. You just have to ensure that they know this and can adjust their season accordingly. Still, the European Games reflect a great opportunity for different countries around Europe to host events that are more manageable than Olympic Games. The choice of Azerbaijan is very interesting in that I know this country wants to host many international events, and I think that it is great exposure for them and probably a stepping stone to other major events.

What does Baku bring to the table as the inaugural host city?

I hope that they do not place the bar too high that others will not be able to follow, because I get the feeling that they want to make their mark and do great things. Azerbaijan has developed incredibly over the past few years, and one unique thing is that they are on the frontier of Europe and Asia and, therefore, are a great link to other parts of the world. The Caucasus region is also historically within the Silk Road and represents a great tradition of exchange and meeting of people from different horizons all around the world. It is a unique culture, and a fortuitous set of circumstances has brought people here. If that can be reflected in the Games, it will be a great success. International sports have a great ability to unite people anyway; however, if it can also be in this kind of atmosphere, then the discovery of a unique culture makes the experience that much more pleasurable and interesting.

Where do you see opportunities for increased cooperation between Monaco and Azerbaijan?

We are talking about cultural events and exchanges related to the Games, such as a small exhibition on my family and my parents that will open in time for the Games. I think it would be interesting at some point to see if the equivalent of our Chamber of Commerce in Monaco, which is the Chamber of Economic Development can coordinate to meet some business leaders from Azerbaijan. I believe that would be very productive and I think they could find great synergies for cooperation in different areas.