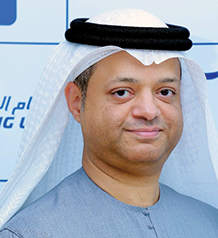 Dr. Faisal Ali Mousa is a recognized business leader in the Middle East with an impressive track record spanning over a decade. Steering the FAM Holding group’s growth through far-sighted vision and innovation, he lends hands-on expertise to the business conglomerate. He also has rich professional experience in technology, hospitality, real estate, and construction. His expertise ranges from project management, investment, and feasibility studies to corporate management. His mission is divided into two parts, to present the market with unparalleled man-made projects that combine modernity and tradition, and to present affordable solutions that meet the needs of high, medium and low-income buyers. He holds a PhD in economics and business management from Oxford College, Ireland.

Share on:
TBY talks to Dr. Faisal Ali Mousa, Chairman of FAM Holding, on how to build smart in the desert, organic rooftop farms, and using local artists to bring out the best of Sharjah's flavor.

How did you develop the Smart Tower concept in the UAE?

Our first project in Ajman was in mid-2014. We bought land in the middle of the desert and decided to develop the first smart tower there. If you have a property in our smart tower, you can control everything in your flat—the lights, air-conditioning, television, curtains, cameras, water heater, and intercom—with a single mobile app. It was the first such concept in Ajman, combining IT with real estate. Within four months, the project sold out for USD32.7 million. The government of Ajman could not believe that we had moved the market while it was in the doldrums. Now, construction is 50% finished and will be completed by the end of 2018. Then, I wanted to build the first smart tower in Sharjah, in the Al Nahda area. We launched the project within three months, with total sales of around USD54.4 million and sold 85%. The project was such a success that the Sharjah government honored us with the Best Developer Award and the Best Project in 2016.

You give different concepts to your real estate developments. What other concept buildings are you developing in Sharjah?

Our third project in Sharjah is in a prime location, on Jamal Abdul Nasser Street. I decided to include commercial and residential space as well as six floors for parking and four floors for offices. It is a large project, bigger than previous ones, and the concept was to combine sport with real estate. On top of the building there is a swimming pool, gym, basketball and tennis courts, and a jogging track, all 50m above ground where the air is cleaner and less polluted. That project is now 95% sold out, including all the residential units, and about 20% of the construction has been completed. The project is called Sarkwa Tower, after the old name of Sharjah. We also bought another plot of land in Sharjah next to Afamia I to build Afamia II. That was the fastest project we ever sold, and all 130 apartments completely sold out in two months.

You are also developing the Farm and Arts Towers. What makes those projects unique?

In Ajman, we bought yet another plot of land next to Smart Tower and Al Hamra to build a third tower. Called Al Mazraa Tower, this is unique not just in the UAE but worldwide. Mazraa means farm. The tower will give apartment owners organic vegetables year-round through a rooftop farm with a hydroponic system. Residents will have 100% organic vegetables grown on site and brought right to their doors. Sales start next month, and the estimated total value is USD81.7 million. The Ruler of Ajman asks me what new projects we have in the pipelines; that is how excited they are. Another project we launched in July 2017 is the Art Tower in Sharjah. There is a famous Emirati artist called Mohammed Al Ustad that has done exhibitions worldwide, and all our leaders know him. I would like to have his work in the lobby and corridors of the hotel, with a gallery and atelier as well. He loved the idea, and 30% of it is already booked, even though we have yet to launch it. Now, we are in talks with the Art College of Sharjah University to bring their students to paint and work. In July 2017, we will launch our first project in Dubai, which is the Smart Tower III. Dubai is not an easy market to crack. However, I remain optimistic and expect it will do well.

The Best of Times