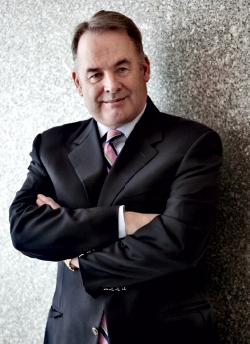 James Hogan, with over 30 years in the travel industry, was appointed President and Chief Executive of Etihad Airways in 2006. His dynamic tenure has included his signing in 2008 of one of the largest aircraft orders in history approximately valued at $43 billion to meet the airline’s ambitious long-term growth plans. James launched his career in 1975 at Ansett Airlines, and subsequent senior positions have included CEO of bmi British Midland, CEO of Gulf Air, and worldwide sales director at Granada Group, where he sat on the board of Forte Hotels. A fellow of the Royal Aeronautical Society, CEO Magazine named him Aviation CEO of the Year in 2008 and Visionary of the Year in 2010.

Share on:
What are the main areas of growth for Etihad Airways? Etihad Airways is one of the fastest-growing, commercially sustainable carriers in the world—a great achievement when you consider that we […]

What are the main areas of growth for Etihad Airways?

Etihad Airways is one of the fastest-growing, commercially sustainable carriers in the world—a great achievement when you consider that we are only ten years old. From our hub in Abu Dhabi, Etihad Airways serves nearly 100 passenger and cargo destinations in the Middle East, Africa, Europe, Asia, Australia and North America. The airline currently has a fleet of 86 Airbus and Boeing aircraft, and more than 220 aircraft on firm order, including 71 Boeing 787 Dreamliners, 25 Boeing 777-X, 62 Airbus A350s, and 10 Airbus A380s, the world’s largest passenger aircraft. Etihad Airways holds equity investments in Air Berlin, Air Seychelles, Virgin Australia, Aer Lingus and Jet Airways. Subject to regulatory approval, Etihad Airways will launch a new airline brand in 1Q2014, Etihad Regional, after taking a 33.3% stake in Swiss carrier Darwin Airline. In 2013, we launched flights to Amsterdam, Belgrade, Ho Chi Minh City, Sana’a, Sío Paulo, and Washington, DC and announced new destinations in 2014 including Los Angeles and Zurich. Our network is not the only part of our business that’s growing. We have increased our customer base from 1.5 million passengers in 2005 to more than 11 million in 2013. We’ve built our group employee numbers from 3,000 to more than 15,500, across 125 nationalities. We have grown our annual revenues from $300 million in 2006, and had a turnover of $5.6 billion last year. We’ve been named “World’s Leading Airline” in the World Travel Awards for five consecutive years—not bad for an airline as young as we are—and that is just one of many accolades that we have won. It also reflects not only the quality of the First, Business, and Economy Class products that we offer, but the fact that we are considered by our guests to be the best airline in the world—which is what we were mandated to achieve, and continue to strive for.

How do you plan to sustain this incredible growth?

Etihad Airways now has more than 40 code-share partners in addition to the equity partnerships with airberlin, Aer Lingus, Air Serbia, Air Seychelles, Jet Airways, and Virgin Australia. By building on the success of our organic growth, these codeshares and equity acquisitions are intended to give us the scale to compete on a global playing field. The equity investments provide the added advantages of cost savings to be achieved through synergies and economies of scale. The equity acquisition strategy is also designed to create a global footprint, extending our network and reaching new customer segments.

How important is the strategic location of Abu Dhabi to the success of Etihad Airways?

Abu Dhabi is one of the world’s fastest-growing economies, emerging tourist destinations, and growing air transport hubs. The aim is to make the Emirate a global center of excellence and a global hub for commerce and tourism. As the national airline of the UAE, Etihad Airways is not only a critical part of the economic infrastructure but also a key driver of economic growth. It hosts world-leading attractions, from the world’s biggest indoor theme park, Ferrari World, to the Guggenheim Museum and the Louvre, both of which are establishing facilities in Abu Dhabi. This cultural capital embodies Modern Arabia, with the values of respect and hospitality at the center.

How does Etihad Airways differ from its neighboring competitors Emirates and Qatar?

Etihad Airways is a full service carrier with a modern new fleet that offers an award-winning product. We believe it is our attention to detail and unique innovations that set us apart from all competitors, not just those in the Middle East region. A key difference between Etihad Airways and other airlines is the partnerships we have made, codeshare and equity, and the depth that brings to our offering.

How does Latin America tie into the company’s long-term vision?

South America will play a key part in Etihad Airways’ long-term plans to connect major destinations around the world. The airline launched flights to Sío Paulo in Brazil in June 2013, its first destination in South America.

How has the Dreamliner grounding affected operation and expansion plans?

We believe the Dreamliner to be a fantastic aircraft and it will play an important role in our future fleet plans. Etihad Airways has 71 Boeing 787 aircraft on order, with the airline placing an additional order for 30 Boeing 787-10 Dreamliners at the Dubai Air Show 2013. Those aircraft join the previous order for 41 of the Boeing 787-9 variant and includes the milestone 1,000th Boeing 787 Dreamliner to be ordered. The first 787 is due for delivery in 4Q2014. The aircraft will be utilized on core trunk routes where there is passenger and premium traffic demand across the network, especially destinations in Asia, the US, Europe, and Australia. Etihad Airways has significant plans for its 787s and will integrate its program with its equity partner airberlin. The move, which involves 56 aircraft, will save millions of dollars for both carriers, which together represent the largest single order for the Boeing 787.

How important is the Middle East-Australia route to carriers in the region?

The Australian market is one of the most significant and diverse in the Etihad Airways network and is strategically important. In addition to flying twice daily to Sydney, daily to Melbourne, and daily to Brisbane the airline also has a 19.99% stake in Virgin Australia Holdings. Etihad Airways and Virgin Australia have developed a highly successful, multi-tiered partnership that includes code-sharing on flights, joint marketing initiatives, and reciprocal earn-and-burn on respective frequent flier programs.

Why do you think cargo freight bounced back quicker than passenger numbers following the global financial crisis?

Cargo is a key element of our current and future growth strategy and today we are outperforming industry levels. Currently, Etihad Cargo generates around 20% of Etihad Airways’ total company revenue and we see that continuing to grow. Whilst our current freighter network has the ability to develop in its own right, we’re also active in linking freighter capacity to our growing passenger belly space. Over the past year, we have taken delivery of three new freighters, one Airbus A330-200F, and two Boeing 777-200LRFs. We will also take delivery of a further Airbus A330-200F in May 2014. Utilizing freighters to cargo-specific destinations, but linking them to the passenger core network maximizes the use of passenger belly space and dedicated freighter space. Our strategy will continue to focus on cargo-specific destinations, but in a way that feeds into passenger destinations, too.

How would you evaluate the liberalization of aviation in recent years, and what steps still need to be taken?

Etihad Airways openly favors bilateral airline partnerships over isolationism. There are still markets around the world that are restricted by bilateral or regulatory constraints, and Etihad Airways continues to push for these restrictions to be removed. The evolution of the global aviation market is being driven by the shifting base of economic development from first world, developed economies to emergent Asian powerhouses and the fast-growing BRIC countries.

What role do sponsorship deals play in your business?