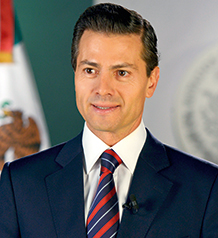 Enrique Peña Nieto holds a BA in law from the Universidad Panamericana and a MA in business administration from the Instituto Tecnológico de Estudios Superiores de Monterrey (ITESM). From 2000 to 2002, he was secretary of administration and, from 2003 to 2004, he was Representative of the 13th District in the 65th Session of the State of Mexico. In 2005, Enrique Peña Nieto was elected governor of the State of Mexico for September 16, 2005 to September 15, 2011. In 2011, at the end of his term as governor, he campaigned for the position of President of Mexico and won the elections on July 1, 2012.

Share on:
TBY talks to Enrique Peña Nieto, President of Mexico, on the benefits of the Pacific Alliance and which sectors of the Peruvian economy will attract Mexican business today and tomorrow.

Bilateral trade between Peru and Mexico has reached more than USD2 billion. How has the Pacific Alliance helped promote trade between the two countries?

In recent years, Mexico has become one of Peru’s major trading partners. In 2010, we were Peru’s 13th-largest trading partner, while in 2014 Mexico was the ninth-largest trade partner. Through the first half of 2016, we have become the eighth-largest trading partner for Peru. Between 2001 and 2014, Mexico’s trade with Peru increased ninefold, from USD314 million to USD2.836 billion. The growing trend of bilateral trade responds largely to investments by Mexican companies in Peru and has been strengthened by the Trade Integration Agreement between Mexico and Peru and the Pacific Alliance. In addition, with the Pacific Alliance we eliminated customs tariffs on 92% of our products, and we are heading toward their complete elimination by 2030. In addition, we have conducted several meetings not only with officials, but also with businessmen of the bloc to promote trade and bilateral investment.

What are the specific segments of the Peruvian economy that are particularly attractive to Mexican investors?

Peru is a sister nation in solidarity with Mexico, and together we have strengthened the mechanisms of cooperation for our mutual economic and social benefit. Based on our bilateral trade agreement and, above all, being part of the Pacific Alliance, we have found promising sectors for trade and mutual investment. In particular, the Peruvian metalworking industry is highly attractive for Mexican companies. We can also see that the metals industry is interesting, especially steel operations. The service sector is another area of particular interest, as the experience of Mexican companies shows the significant growth potential for service providers. On the other hand, Mexican companies from sectors such as mining, telecommunications, processed food, entertainment, education, infrastructure, petrochemicals, and telecommunications have also found a strategic partner in Peru.

How do you foresee future bilateral relations between both countries?

Peru and Mexico share many particular traits, as well as deep historical and cultural affinities. These elements encourage and stimulate understanding and bilateral dialogue between our countries, which is why I am convinced that the relationship will be enriched by the growing trade volumes and structural reforms that my government has launched, increasing Mexican investments in Peru’s tourism, academic, and technological sectors, and cultural exchanges. The understanding between Peru and Mexico will continue to bear fruit thanks to instruments of cooperation on important issues such as culture, education, and tourism, all framed within the Strategic Partnership Agreement, which entered into force in June 2015. In addition, we continue to strengthen our relationship in terms of safety thanks to the agreement of exchange of experience and training in the field. Ours is an even stronger relationship, because we have not yet tapped the full potential of our Trade Integration Agreement, and that of our society in the Trans-Pacific Partnership Agreement (TPP). Both of these, along with the Pacific Alliance, will help to increase trade and investment flows in both directions while encouraging the productive integration of our economies.