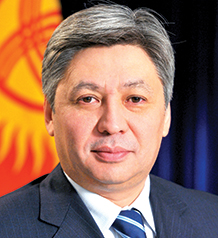 Kyrgyzstan and Iran have had a close friendship, including historical and cultural ties, since ancient times, and these are a solid ground for modern Kyrgyz-Iranian relations. Iran was among the first countries in the world to officially acknowledge Kyrgyzstan’s independence. Diplomatic relations between the two states were established on May 10, 1992. The Embassy of the Islamic Republic of Iran in Bishkek opened on October 21, 1993, and the Embassy of the Kyrgyz Republic in Tehran opened in May 1996. On May 10, 2017 Kyrgyzstan and Iran celebrated the 25th anniversary of bilateral diplomatic relations between the two countries. It should be acknowledged that this is a historical and significant milestone in the history of Kyrgyz-Iranian relations. Kyrgyzstan and Iran have always based their relations on fundamental principles of international law, mutual trust, and respect. The number of mutual visits on all levels have increased lately. The official visit of the President of the Kyrgyz Republic to Iran in September 2015, and the official visit of the President of Iran to the Kyrgyz Republic in December 2016, boosted further development of bilateral relations.

The trade volume between Kyrgyzstan and Iran almost doubled in the last year. How do you reflect on this increase and on the remaining obstacles to bilateral trade?

Trade turnover between the two states is indeed showing a growth trend. However, we are in no way satisfied with these numbers. According to our data, trade turnover in 2016 reached only USD14.78 million, while in 2015 it was USD8.14 million. These numbers are still low. At the same time, Kyrgyzstan and Iran have huge potential in terms of economic collaboration. According to our estimates, the optimal level of bilateral trade should be around USD200-300 million a year. Increasing trade turnover is on the top of the agenda of the Kyrgyz-Iranian bilateral collaboration. I would like to specifically highlight that attention is now being paid to implementing prior arrangements that were reached in the course of leaders’ visits in 2015 and 2016. These visits became a strategic platform for progress regarding all Kyrgyz-Iranian relations including those in trade and economy.

The long-term cooperation program between the Kyrgyz Republic and Iran for 2016-2026 was adopted in Bishkek during the official visit of President Rouhani in December 2016. Kyrgyzstan has big hopes for approval of this diversified cooperation program that is a solid base for development and intensification of our bilateral relations. Within the framework of the program, the parties intend to actively cooperate in political, trade and economic, cultural, and humanitarian areas, as well as, among others, healthcare, education, tourism, and security. We are interested in implementing joint economic projects, first of all in sectors such as transport, communications, processing, agriculture, energy, food, and light, to diversify areas of collaboration between our countries. To achieve these aims the Kyrgyz-Iranian intergovernmental Commission for Trade, Economic, and Scientific Cooperation is increasing its activity, which is an important mechanism.

How can Iran contribute to the development of the hydroelectric power sector in Kyrgyzstan?

Hydropower is the leading segment of Kyrgyzstan’s national economy, and we successfully collaborate with quite a few countries in it. As for the participation of Iranian companies in this sector, opportunities for bilateral cooperation are being studied. There is a joint Energy Committee of the Kyrgyz Republic and Iran, led by the State Committee on Industry, Energy, and Subsoil Management on the Kyrgyz side, and the Ministry of Energy on the Iranian side. The committee had its first sitting in March this year. Cooperation in the energy sector, existing energy capacities of the Kyrgyz Republic, hydropower resources, and opportunities for renewables in particular were discussed during the sitting. Currently, we are studying various energy projects are hoping their joint implementation will begin in the near future.

How can Kyrgyzstan and Iran work together in promoting regional stability and security?

The modern world is facing unprecedented threats and challenges in terms of international, regional, and national safety. Kyrgyzstan is a peaceful country and is in favor of solely peaceful ways of resolving all the conflict issues—at the meeting table and guided by principles and standards of international law. The Kyrgyz Republic and Iran actively cooperate in matters of regional stability and safety within the framework of various international and regional organizations. Regarding bilateral cooperation, there is a contract and legal base between the two countries to which relevant institutions of the states refer. In general, we are satisfied with the level of bilateral cooperation in this area.