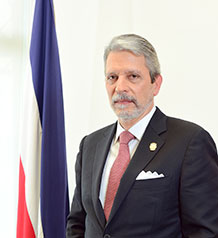 Show Me the Way

Mauricio Ventura Aragón received a master’s in business administration from the University of Washington D.C. before going on to develop a career in hotels and tourism. From a pioneering family of hoteliers, he has more than 35 years of professional experience as well as extensive understanding of financial analysis through his work in the stock market and banking. He has served as director and president of various boards for trade associations and state agencies, and was appointed to the San Jose Board of Tourism by the capital’s mayor in 2007.

Share on:
"We will also continue attracting new airlines and working closely with the different PR agencies in Europe."

The tourism sector in Costa Rica grew three times faster than the national economy in 2015. What are the main areas the ministry has worked on to maximize this sector’s potential?

It’s fair to say that tourism is Costa Rica’s main economic sector and the figures prove this. For example, 27% of the country’s workforce is employed in the sector; around 29.6% of the country’s exports are in tourism and, according to the latest data from the Central Bank, while services represent around 40% of GDP, tourism accounts for 20% of that. We also expect it to grow three or four times faster than the national economy. Moreover, it is extremely diverse, and SMEs represent the great majority of its enterprises. That it is dispersed throughout the country has enabled us to boost investment in all of Costa Rica without favoring one or two areas, bringing investment to regions that otherwise wouldn’t have it. At the moment, the average stay is 13 days, a length of time that proves what an array of offerings we have to get people to stay that long.

The vast majority of tourists come from the US, with an increase of 21% in the first semester alone of 2016. In general, what is the average tourist profile that visits Costa Rica?

The average tourist is culturally well educated, meaning they know what Costa Rica has to offer. We also see that visitors leave the country extremely satisfied, and we have a revisit rate of 30%, which is high. Costa Rica sells life experiences and we see that those who visit are eager to consume them.

What kind of projects do you have in mind to further realize the potential of the tourism industry in Costa Rica?

Costa Rica is well known in two areas: nature and adventure. According to the World Economic
Forum’s (WEF’s) tourism competitiveness study from 2015, Costa Rica is number one in terms of nature among 140 countries and number two in adventure, just behind New Zealand. This proves that we can compete with the world. Our objective is to further consolidate the country’s position in these two areas. At the same time, we are also trying to add to this strategy. For example, the Conventions Centre is a nationwide effort to position the country as a leading destination for MICE tourism. We have started to promote Costa Rica in this field at the international level through fairs and tourism events. To be sure, we are trying to boost our potential in this area across the entire country rather than focusing on one or two cities. Usually, international conventions bring between 50 and 500 guests to the country, a number we can easily accommodate in many areas of the country and not just in the new Convention Centre. We want this facility to become the visible head of this strategy. We see a lot of potential to boost tourism figures through this segment thanks to the fact that it happens in our low season. The MICE tourist spends between USD200 and USD400 per day each, whereas the average tourist we have today spends between USD110 and USD115. So the potential is huge, and we have hired business analysts to better learn how to position ourselves in the MICE segment and maximize the country’s potential in this area. We also focusing our development strategy on wellness tourism and want to implement a similar approach as we have with MICE. There are plenty of synergies we can generate with our strong position in the nature and adventure segments. Over the last few years, we have boosted our airport infrastructure across the country, a strategy that has definitely paid off; increased the number of arrivals in regional airports; and attracted many new airlines, the latter largely come from two of our main tourism markets; the US, which represents 40% of our visitors, and Europe, whence we received almost 400,000 visitors in 2015. As for Europe, we have historically been connected to Europe through Iberia, but wanted to diversify to reach to a broader audience so now have British Airways and Condor, which better positions us in the British and German markets. Soon we will have Air France and Edelweiss. While these efforts are already helping us better promote Costa Rica internationally, we have also hired PR agencies in the four main European markets and five main Latin American countries where we see large potential for Costa Rica. And our strategy is focused on getting to know the markets that already visit us even better.

Which areas still need improvement and what is the Ministry doing to tackle the seasonality challenge?

Visitors leave the country overall very satisfied, but we know we can still get better in some areas. Infrastructure is one of these—even historically so—and we need to work closely with other ministries in order to tackle this. Our efforts to move toward MICE tourism are a good example of what we are doing to minimize the impact of seasonality in the industry. At the same time, we have redirected economic efforts and investments at the Ministry level. Previously, the ICT focused many of its campaigns on the high season—60% of its budget on the high season and 40% on the low. Today we invest 70% of our budget on promoting the low season and 30% on the high. In this context, we need to work together with the private sector to focus our strategies on a common goal.

What are the Ministry’s objectives for 2017?

The Convention Centre needs to be ready and fully operating. We will also continue attracting new airlines and working closely with the different PR agencies in Europe. These combined efforts should allow us to break the seasonality factor. We are also looking at redefining our strategy for attracting tourism investment in order to get more funds for infrastructure areas like hotels. In terms of cruises, we want to bring back some companies that left several years ago and boost this segment of the tourism industry. We also expect to release the results of a pioneering study at the international level to measure the contribution of tourism to a country’s development of a country, something that’s never before been done. We are calling it the Social Progress Index in tourism. This index will enable us to better know what the tourism industry generates in each region and community to help us to better define public policies for these areas and really understand their needs. Our aim is for the tourism industry to ensure the welfare and support the social development of every community and region in the country.