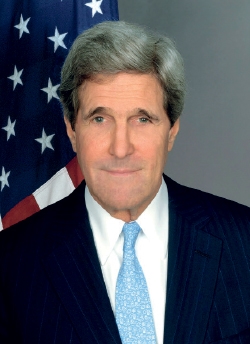 John Kerry was sworn in as the 68th Secretary of State of the US on February 1, 2013, becoming the first sitting Senate Foreign Relations Committee Chairman to become Secretary in over a century. He graduated from Yale University and enlisted in the United States Navy, serving two tours of duty. He later obtained a Law degree from Boston College Law School and worked as a prosecutor in Middlesex County. He was elected Lieutenant-Governor of Massachusetts in 1982, and two years later he was elected to the US Senate, where he served for 28 years. In 2009, Secretary Kerry became Chairman of the Senate Foreign Relations Committee.

Share on:
Lebanon is obviously much more than a beautiful country, which it is. It is a very important country, and it is very important to the security of the region and […]

Lebanon is obviously much more than a beautiful country, which it is. It is a very important country, and it is very important to the security of the region and beyond. And I think everybody knows that the United States of America is deeply committed to Lebanon’s security, to its stability, to its sovereignty, and to supporting the Lebanese people during this difficult period.

We all know that the consequences of the civil war in Syria reach well beyond Syria’s borders, and Lebanon is feeling those consequences as much as any other country or community. Nowhere, in fact, has the international impact of what is happening in Syria been felt more in many ways than what is happening here. And that particularly includes the 1,600 cities, towns, and villages across Lebanon that are now hosting refugees of all ages.

I have personally had the opportunity to meet with some of those refugees, the Syrian refugees, who are now in Jordanian camps. And when I was there, it was impossible for me not to feel the incredible frustration and anger and loss that those refugees felt. If it isn’t enough that they don’t see their life situation changing, what they also don’t see is they don’t see the war ending, and so for them life is difficult, and it is bleak every day.

With the newest contribution the US has now committed more than $2 billion to support refugees and the nations that have opened their doors to them.

The devastating events in Syria have obviously gone on for far too long, and I am proud that we have stood by the people of Lebanon from day one. We will continue to support the people of Lebanon. I made it clear to Prime Minister Salam that President Obama is deeply committed to supporting Lebanon, supporting the security initiatives, and we will continue to remain engaged in our efforts to try to find a way to move forward.

Lebanon’s security for years has been of paramount concern to the US. And that is why I have to say that the current political stalemate here in Lebanon is deeply troubling. It is unfortunate that the parliament did not elect a president on schedule, as the Lebanese constitution requires. And now it is far more important for the vacancy to be filled so that the people of Lebanon can reap the benefits of a fully constituted, fully empowered government. That is important for Lebanon, it is also important for the region, and it is important for those who support Lebanon. And we need a government that is free from foreign influence, with a fully empowered president, and with the president and the parliament responding directly to the people and to the needs of the people of Lebanon.

I reiterated my support to Prime Minister Salam at a meeting we recently had, and I reiterated President Obama’s support for the stewardship of the Lebanese government by Prime Minister Salam and his cabinet. And I thanked the Prime Minister for the principles that we share and for his commitment to those principles. This is not a time for business as usual. The challenges are just too significant, and the challenges are all interconnected. Lebanon needs and Lebanon deserves to have a fully empowered, fully functioning, complete government. And we hope the Lebanese parliament will select a president quickly.

In the meantime, I did assure the Prime Minister that the US will remain a strong and reliable partner, and we will continue to support Lebanon and its institutions. That includes support that is aimed at building the capacity of the Lebanese armed forces and the internal security forces in order to help them be able to secure Lebanon’s borders, to be able to handle the refugee flows, and to be able to calm the tensions and combat terrorism. In fact, we are seeking, right now, to increase our assistance to those institutions.