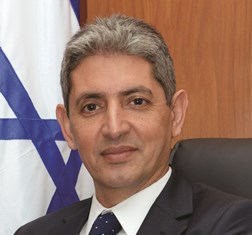 Ambassador, Embassy of Israel in Panama

Reda Mansour previously served as Ambassador of Israel in Brazil, Ambassador of Ecuador, Deputy Ambassador in Portugal, Consul General of Israel in Atlanta and Dean of the Consular Corps of Atlanta, and Consul in San Francisco. He holds a PhD from the University of Haifa, where his doctoral work focused on the intellectual history of modern Syria. He also holds a master’s degree from the Kennedy School of Government at Harvard University and speaks five languages.

Share on:
Given the many Israeli companies in various sectors of the Panamanian economy, there are several avenues in which to pursue bilateral diplomacy.

What are the issues to be discussed with the new government of Panama?

The most urgent issue for Panama is water. Israel can help significantly. Panama, like other Latin American countries, has not had to worry about water throughout its history. However, Panama and other countries in the region must start planning their systems much better, along with controlling and directing these systems differently. In the past, Latin America had water without limits; however, today, this resource is no longer free for the countries of Latin America. Israel is a country without a great deal of water, and, due to this, we have managed to develop extensive technology for the management of water systems and water conservation. We can offer many components in Panama to make a historic change. Agriculture and water are existentially linked, and Israel has a great deal of experience in this field, producing all the food we need but also managing to export, too, even though most of the country is desert. We have already done this in Colombia and Ecuador, where some companies in Israel work in sectors such as flowers. Today, these companies sell almost USD1 billion in flowers in international markets.

What is the contribution of Israeli companies to the Panamanian market?

There are Israeli companies in many sectors of the Panamanian community, and we are about to close a free trade agreement (FTA). In Israel, we have already finished the whole process, and here it is only necessary to ratify it in the National Assembly. We have Israeli companies in the agricultural sector and, with our help, Panamanian trade can reach Dubai, Singapore, and other places that are centers of globalization. In fact, Panama and Israel can connect the world because Israel is a global technology center, and Panama is an important hub because of its canal and the airport. If we join these two centers, we will have an international network. There are examples such as Selina, which is a company that works a great deal on the Casco Viejo and is an important anchor for the tourist sector in Panama, especially for cruises where 25-30% of the Casco development corresponds to Israeli companies. Grupo Dekel also participates in this project. In five or six years, it will be one of the most impressive cities in the world.

What is the approach of the Israeli embassy in Panama in terms of academic exchanges between educational institutions?

We have visited all the major universities in Panama and have met with different deans and faculties. There are different topics on which we can focus to use the experience of Israel. There are already Panamanian students studying in Israel, and their teachers say they are amazing students. These people will return to Panama with the best knowledge in their fields. There are about 50 Panamanian students in Israel, but we can have many more. We have agreements of this type in other countries. Israeli universities started many international programs in English in the last decade, which helps Panamanian students reach Israel, Tel Aviv, Haifa, or Jerusalem. All have programs of thousands of students from all over the world. We want to send more Panamanian students and bring more Israeli teachers. In fact, we are invited to the National Congress of Science and Technology (APANAC) of 2020 in Panama. This is a great opportunity to activate the academic environment with Israelis at this conference. Also, we want to send deans and directors to Israel, so the students of Israel can see what they are doing. There is much to be done in the academic field. Modern diplomacy happens across many sectors.