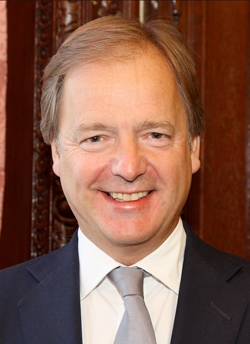 Born in 1959, Hugo Swire studied at St Andrew’s University for a year before going to the Sandhurst Royal Military Academy (RMA) and was subsequently commissioned with the 1st Battalion, Grenadier Guards. He later worked for Sotheby’s for nine years, five as a Director. He then worked for four years as the National Gallery’s Head of Development. He was first elected as a Conservative Member of Parliament for East Devon in June 2001. He has worked as Principal Private Secretary to Rt. Hon. Theresa May MP, Opposition Whip, and was appointed Shadow Minister for the Arts in 2004. He served in David Cameron’s first Shadow Cabinet as the Shadow Secretary of State for Culture, Media, and Sport. He was appointed Minister of State for Northern Ireland in the coalition Government in May 2010, and appointed a Privy Councillor in the same year. He is currently Minister of State at the Foreign and Commonwealth Office covering the Far East and South East Asia, India and Nepal, Latin America, the Falklands, Australasia and the Pacific, and the Commonwealth.

Share on:
In 2010, the UK Foreign Secretary William Hague launched the Canning Agenda—a drive to reverse a long-standing British tendency to underestimate Latin America and neglect its huge opportunities. Colombia has […]

Colombia has been a clear case in point, and a country with which we have been determined to work more diligently. We have a long-standing relationship with Colombia that has supported the country’s transition from being described as close to a failing state 20 years ago, to a modern, dynamic, and progressive economy in 2012—particularly in security matters. Our relationship is now starting to develop even further, and together we have made big strides toward a more mature and wide-ranging relationship.

A major step along the way was President Santos’ Guest of Government visit to the UK in November 2011, during which he inspired many people with his vision to transform Colombia. The visit also helped to develop a close working relationship between our two governments, reflected ever since through a series of ministerial exchanges on issues such as education, science and innovation, climate change, and human rights. We have also developed a close partnership on global challenges, notably during Colombia’s time as a non-permanent member of the UN Security Council and around the Rio+20 Summit in June 2012. Throughout, we have found Colombia to be a particularly constructive partner on a wide range of foreign policy issues, and we are pleased that Colombia is now taking on more of a leadership role across Latin America.

“Overall trade between our two countries reached a record level of £1.68 billion in 2011 and UK exports of goods and services to Colombia rose by 45% compared to 2010.”

The UK has also been championing Colombia’s bid to become a full member of the Organisation of Economic Cooperation and Development (OECD), as part of an agreed accession process. We welcome the Colombian government’s strong leadership to achieve OECD standards. We see this process as an important opportunity not only to support Colombia’s transformation into a more competitive and open economy, but also to make the OECD a stronger and more globally relevant institution. I am delighted that we have been offering technical assistance where appropriate, including in areas such as fiscal transparency and anti-bribery legislation. We have also helped with the establishment of a National Contact Point as part of the OECD Guidelines for Multinational Enterprises to encourage adherence by businesses to international standards of business ethics.

British companies are being alerted to Colombia’s impressive growth rates and by its unwavering commitment to trade liberalization and investor protection. Colombia looks set to become an even better place to do business if, as we hope, the EU-Andean Free Trade Agreement (FTA) is ratified over the coming months and as the Pacific Alliance trading bloc continues to develop. Given this encouraging backdrop, it is perhaps little surprise that overall trade between our two countries reached a record level of £1.68 billion in 2011 and UK exports of goods and services to Colombia rose by 45% compared to 2010.

The UK is the second largest investor in Colombia after the US, with recorded investments of over $5 billion over the last 10 years. This investment is primarily concentrated in the services, beverages, and extractive (oil and mining) sectors. Many of the British companies present in Colombia are seen as pioneers in responsible business practices, and we will continue to offer support to their efforts. The UK is also funding a number of projects involving UK companies and local NGOs to promote and implement the UN Guiding Principles on Business and Human Rights.

The Colombia of today is a place of great dynamism and optimism. It is therefore encouraging that so many influential British people and organizations are overcoming outdated stereotypes about the country and are finding such imaginative opportunities for collaboration. The UK government will do all that it can to facilitate further such exchanges and to support President Santos in his drive to transform Colombia. Given how much we have achieved over the last two years, it is clear that we have only just scratched the surface of the wealth of opportunities that exist for us to work together.