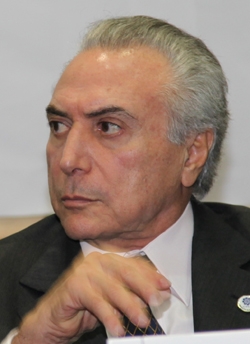 Michel Miguel Elias Temer Lulia received a Law degree from the University of Sío Paulo in 1963, and went on to obtain a PhD in Law from the Catholic University of Sío Paulo in 1974. From 1984 to 1986 and 1993 to 1994, Temer was State Secretary for Public Security in Sío Paulo, and was also the State Attorney-General in Sío Paulo from 1983 to 1984 and again in 1992. Between 1995 and 1997, he was the leader of the Brazilian Democratic Movement Party (PMDB) and acted as its President between 2001 and 2010. Before becoming Vice-President of Brazil, Temer was President of the Chamber of Deputies for three non-consecutive terms. He is considered a renowned expert on Brazilian constitutional law.

Share on:
Brazil has a special relationship with Mozambique. We are brotherly countries on account of historic and linguistic affinities that draw us close together. Today, both our governments seek economic development […]

Brazil has a special relationship with Mozambique. We are brotherly countries on account of historic and linguistic affinities that draw us close together. Today, both our governments seek economic development as a way to promote further social justice.

In recent years, Brazil stabilized its currency, restructured its finances, and—with the end of inflation—implemented additional measures to reduce social inequalities. We have achieved considerable success thus far. Through policies favoring revenue transfer—by means of the “Bolsa Famí­lia” program—35 million people were raised out of poverty. A new middle class flourished and began to spend more. This compelled national industry to increase production to the same extent. A virtuous cycle was created in which social investment brought along positive economic results as widespread national wealth increased.

That sense of domestic justice also pervades our action in other countries—after all, we should all be entitled to prosper and advance. Benefits ought to be mutual. Cooperation with Mozambique is conceived with this vision and sense of purpose. Our investment model focuses on its people and on the legacy to be left to the country. For example, the activity of the Brazilian company Vale at the Moatize coal mine is an eloquent example of such a beneficial type of cooperation. Indeed, another 35 companies explore ore in that region. Yet a differentiating factor of Brazilian mining is its investment in local human resources. Brazil and Mozambique are bound by the same language, which makes it easier to train workers in that sector. Vale has been investing in crucial infrastructure, particularly in establishing and expanding the railway to Nacala Port. There are billions of dollars at stake. The greatest gain, however, is that Brazil is getting even closer to Mozambique as we jointly plan solutions for the future development of our countries. For that reason, we encourage private entrepreneurship to provide investment in farming production and raise cattle nearby the premises of the railroad up to Nacala.

The Nacala Fund, a private initiative launched in July 2012 during my visit to the country, is geared toward attracting resources to finance food production projects. Brazil has come a long way to master some of those techniques. We were able to develop cultures adapted to the typical climate and soil of central Brazil. The Empresa Brasileira de Pesquisa Agropecuária (Embrapa) has been responsible for producing crops in the Brazilian savannah—an area with considerable similarities to the African savannah. The cerrado is where the largest agricultural production currently takes place in Brazil—a region blessed by record harvests and exports. Likewise, Embrapa is assisting Mozambique in cultivating seed species adapted to that specific environment.

Enduring economic development requires constant evaluation and commitment to improvement with social awareness. Investments and economic projects should be the result of joint effort and partnership—always placing human needs at the heart of such endeavors. These actions should thus attempt to solve down-to-earth problems. Today, Africa is afflicted by AIDS. That is why the Brazilian government is engaged in sharing knowledge about antiretroviral medication production with other countries.

I was honored to witness the beginning of activities of the first factory for such medicines on the African continent based on Brazilian technology transfer and located in Mapula next to Maputo. By 2013 Mozambique will hopefully have the means to produce antiretroviral medicines. This factory is what might best symbolize the close cooperation between Brazil and Mozambique.

Motivated by such cooperative spirit, I foresee other inspiring projects within the framework of increased partnership. Nowadays, Brazilian technical cooperation is brought to other countries with the aim of sharing experience and improving the quality of life. Brazil has shown how to exert increasing influence in today’s world mainly relying on soft power and the strength of solidarity. One way of reducing disparities worldwide is by sharing knowledge and test-proven techniques with a view to enhanced food security, health, and socioeconomic prosperity on behalf of us all. Brazil and Mozambique have deepened their ties and strengthened common action, which will benefit not only their own populations but also the spirit of cooperation underlying relations among members of the Community of Portuguese Speaking Countries.