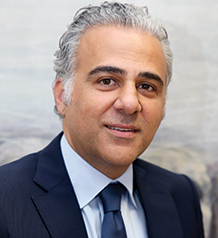 Prior to his appointment at the CMA, Firas Safieddine served as the Senior Advisor to the Lebanese Minister of Economy and Trade, and later the Lebanese Minister of Finance for a period of almost five years. Along with his full-time job, Safieddine serves on the Board of Directors of several investment companies in Lebanon, Saudi Arabia, Singapore, the UAE, and the UK, and was also an instructor of finance at the Olayan School of Business at the American University of Beirut. He holds an MBA from the University of Chicago Booth School of Business.

Share on:
TBY talks to Firas Safieddine, Vice Chairman of the Capital Markets Authority (CMA), on the benefits of privatizing the BSE, attracting companies to the stock exchange, and the rise of capital adequacy ratios.

The BSE has one of the lowest penetration rates in the region and is also one of the least diverse. How will privatization change this?

The success of any stock exchange is in its depth and breadth. We do not have that today. We have not listed a company for the past 15 years since there is no excitement about it; the BSE is not dynamic, and the younger generations are unaware of the possibilities to list their companies. This trend happened mainly due to the outdated regulatory system we had and the small level of capitalization of the stock exchange, which deterred investors from coming. That is the reason why we gave priority to creating a proper regulatory framework that reflects a solid and promising system. On the supply side, we believe that there are many companies out there that can be attracted to the BSE and we have solid family businesses and great SMEs performing even at regional levels. Also on the supply side, there are a few government-owned entities such the Telecom Operators, Middle East Airlines, and the Casino Du Liban to name a few, that could create a major shift in the Capitalization of the BSE once listed. On the demand side, entities interested in bidding for ownership of the new exchange should be able to ensure the ability to become market makers.

Many Lebanese companies are listed in foreign stock exchanges but are not traded in Lebanon. Is there a strategy to bring them back?

This is exactly what we are trying to do. First, from a supply-side perspective, the number of active financial brokerage firms was limited, as there are certain barriers, one of them being the minimum capital required to license a financial intermediary, which is USD1.6 million for the lowest tier and goes up to USD5 million. Our new regulations have dissected the activities of capital markets into five categories: dealing, managing, advising, custody, and arranging. This move will reduce the minimum capital requirement from USD1.6 million to as little as USD100,000 depending on the category selected. We are confident that this will create an infrastructure of focused professional financial institutions that could help increase the appetite of local firms to trade and list on the BSE. I am also confident that this new procedure will attract many of the high-caliber Lebanese diaspora financial professionals to set up base back in the country.

Most people look to commercial banks rather than the capital markets. Will an increase in the latter be detrimental to the activities of the former?

We have a financial system that is purely debt-based. And while banks today have reached close to 100% of GDP in terms of lending, capital adequacy ratios are on the rise. As such, lending through banks will become more expensive and thus contribute negatively to the economy in the longer term. A viable source of accessing capital would have to be through the capital markets, therefore shifting the current financial system from a debt-based to a capital markets based system. As to whether a flourishing capital market is detrimental to banks, the answer is no, it is the banks themselves that are better positioned to champion such a shift in the system.

Do you see privatization coming in a certain time frame?

Seeing and hoping are two different things. We hope it will come soon, and we are close to that. I can firmly say the BSE will be subsequently privatized, so change is imminent. My guess is that it will happen within the next 12 months or even less. I am positive about the future of capital markets in the country; you have at one hand a solid regulator, banks, and financial institutions that are ready to play an active role in the capital markets, and companies that have so much to benefit.