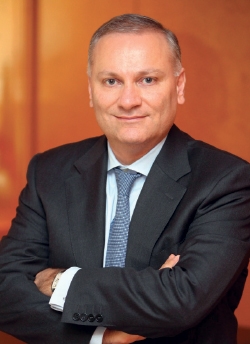 Saad Azhari has been the Chairman of BLOM BANK since 2008, prior to which he was Vice-Chairman and General Manager. He also has several functions on the Board of Directors of BLOM Bank Group’s entities. In addition, he has been the Vice-President of the Association of Banks in Lebanon since 2001. He first joined BLOM BANK in Switzerland in 1991 and was appointed as its General Manager in 1997 and its Chairman in 2001. Between 1986 and 1991 he worked at PBZ Privatbank, an affiliate of UBS Group, in Zurich. He has a Master’s degree in Computer Engineering and an MBA from the University of Michigan-Ann Arbor in the US.

Share on:
Has BLOM BANK been affected by the regional turmoil over the past year? Relatively speaking, 2013 was a good year for BLOM. We registered growth on the balance sheet, and […]

Has BLOM BANK been affected by the regional turmoil over the past year?

Relatively speaking, 2013 was a good year for BLOM. We registered growth on the balance sheet, and in loans and deposits, and posted growth in profits of around 5%. BLOM is a very consistent bank, and we continue to be prudent with gradual growth, and have never seen a year of decline. Three years ago Syria was the second most important market for us after Lebanon. Yet today it is one of the smaller ones—there has been a major drop in deposits and loans. Therefore, the war in Syria has not really affected our bottom line by much in 2013 as the country is a proportionately smaller operation. We were affected more by Syria in 2011 and 2012 because of the big drop in our operations during those two years. There is another dimension to this, however, in so much as both in addition to our operations in Syria, Lebanon is also feeling the pinch in terms of lower economic growth due to the security situation in the region and the arrival of refugees. Ultimately, the performance of the economy affects that of the bank, too.

But if we talk about the year to date, have overall deposits grown on last year?

We are still growing continuously, as we have recently published our 1Q2014 results showing growth in deposits and loans. The bank’s strategy errs on the side of caution and looks for gradual growth, and while we are modern with a liberal outlook in general terms, we opt for a conservative stance in business.

In terms of customer deposits in Lebanese pounds, we are number one, at around 13%. In terms of overall deposits, we hold 13.4% of the market. As for lending, we are number one in retail banking in all product categories (housing loans, car loans, personal loans, and credit card receivables). We are also the number one lender for loans made to entities operating in Lebanon. BLOM BANK has also been voted unanimously as the best bank in Lebanon by many major international institutions.

Does BLOM BANK have any intentions to significantly expand its foreign market size in terms of loans and deposits similar to Bank Audi?

While we are present in 13 countries, for us the bottom line is more important than scale. Our shareholders are more concerned about return on equity (ROE) and profitability than about the size of the balance sheet. This is where our culture is different, because we are very careful in terms of keeping our costs low and our ROE high—we have the highest ROE and the lowest cost-to-income readings in the sector. And today, we even have the highest level of profits even though we do not have the highest equity, so our profitability is the highest in relative and absolute terms. At BLOM BANK, we have more than sufficient equity from our internally generated profits, which makes for a relatively strong equity base, meaning there is no need to raise additional equity.

How well do you feel Lebanon’s banking sector is progressing to be able to meet Basel III requirements?

The sector is in good shape. First of all, Lebanon is going to be compliant with the ratios required by Basel III by the end of 2014. The central bank has actually asked the banks to be compliant by the end of 2014, stipulating a 12% capital adequacy ratio (CAR). Basel III stipulates full compliance by January 2019, and therefore we are set to be at least three years ahead of the rest of the world. Already, the average CAR of the banks in Lebanon is close to 12%.

How is your investment banking arm developing in Lebanon and the region?

What could you tell us about the BLOM Development Bank, which is specialized in Islamic banking?

It is doing well, and experiencing growth, although Islamic banking in Lebanon represents a minuscule market when compared to the total size of the commercial banks. There is no real tradition of Islamic instruments in Lebanon—they are much more established in the Gulf. In Lebanon, people prefer commercial banks. Islamic banks still account for less than 1% of the banking universe locally.

What areas is BLOM BANK investing in the most?

As a universal bank, we undertake all activities. In 2013, growth in lending was mostly in housing loans in light of the central bank’s incentives. Asset management and fund management have also grown amid greater public interest. We have also paid attention to the SME sector, and hence these three areas have seen the highest levels of growth, in that order. And then, of course, technology is crucial in our business, and we always try to lead the field in this area. We have also pioneered several products, with one being a credit card, the Touch pre-paid VISA Credit Card, which loads units onto your mobile phone as you spend, instead of receiving points. This card proved highly popular with the public. In fact, it was so successful it received VISA’s “Best Acquisition Campaign” award for Lebanon in 2013.

Do you have a technology budget?

Whenever we see an opportunity to invest in an innovation that has the potential to bring us benefits, we don’t hold back.

In what region will you be expanding your operations the most over the next year?

The growth of our operations is mostly observed in those countries that we have recently entered. Our investment banking arm in Saudi Arabia is growing rapidly. Meanwhile, our corporate and commercial banking operations in Qatar are also expanding swiftly. Overall, our Gulf operations, namely in the UAE, Qatar, and Saudi Arabia, are in general doing well. Our operation in Egypt performed strongly in 2013, and we expect 2014 to be extremely good as well. I would, in fact, say that the Gulf and Egypt are posting the best growth performance.