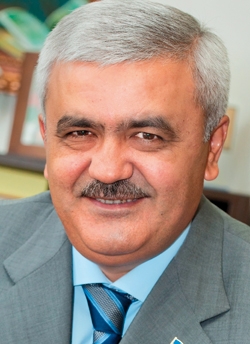 Secure in the Knowledge

Rovnag Abdullayev began his career at Neft Dashlari (Oil Rocks) in 1989. In 1990 he worked as an engineer in the Construction Department of the 28th of May Oil and Gas Production Department in SOCAR before becoming Head of the Production Technology Department of the Khazardenizneftgazinshaat (Caspian Sea Oil and Gas Construction) Trust in 1991. He was promoted to Head of the Trust in 1997. In 2003 he was appointed Director of Baku Oil Refinery and was elected to Azerbaijan’s third parliament in 2005 and to the fourth parliament in 2011. In late 2005 Mr. Abdullayev was appointed President of the State Oil Company of Azerbaijan Republic (SOCAR). In 2008 he was appointed President of the Azerbaijan Football Federations’ Association (AFFA).

What have been some of SOCAR’s major developments over the past 12 months?

In 2012, 43.3 million tons of oil and 26.9 billion cubic meters (bcm) of natural gas were produced in the country. Of these, 8.3 million tons of oil and 6.9 bcm of natural gas were produced by SOCAR. In order to maintain the stability of production from the fields that we operate in, we carried out 715 geological and 3,700 technical activities, which enabled the production of an additional 322,000 tons of oil. We have also conducted exploration work, with the drilling of more than 130,000 meters, resulting in the launch of 86 new wells. In addition, SOCAR completed the construction of a compressor station in the Gunashli field. Production has begun at the Umid field and the drilling of a second well is under way. There has been renewed interest in Caspian exploration, and in particular for gas.

What significance does this have in terms of energy security for Europe?

The Absheron field was discovered in the Azerbaijani sector of the Caspian with French company Total in 2011. The field is believed to contain 350 bcm of gas and 45 million tons of condensate. Taking into consideration the commencement of Shah Deniz II, as well as SOCAR’s discovery of the Umid field (with 200 bcm of gas and 40 million tons of condensate) in 2010, this development is expected to enhance Azerbaijan’s role in the energy security spectrum of Europe. As interest in and demand for natural gas in the modern world rises, so does the importance of Azerbaijan as a reliable gas exporter. Today, our country has fully ensured its energy security for many years to come and is playing a significant role in the energy security of the region. Azerbaijan already exports natural gas to Georgia, Turkey, and Russia. At the same time, our gas is exported through Turkey to Greece, thus reaching the EU market. Azerbaijan extensively supports the implementation of the Southern Gas Corridor strategy initiated by the EU. We are fully aware of the responsibility we have for the opening of this energy corridor, which will serve many generations of Europeans. We are currently reviewing several options for exporting Azerbaijani gas to EU countries on the basis of long-term agreements, including the proposed Trans-Adriatic Pipeline (TAP) and the Nabucco-West gas pipeline projects.

Our relations with EU countries in many areas, including energy, rest on a strong foundation of mutually beneficial cooperation. Azerbaijan has been a reliable supplier of oil to Europe for many years. The commissioning of the Baku-Tbilisi-Ceyhan (BTC) oil pipeline in 2006 provided direct access for Azerbaijani oil destined for the Mediterranean Sea region via Turkey. This was the first non-OPEC and non-Russian oil exported to Europe, and it plays a significant role in the energy security of Europe. We share the energy security concerns of other countries and aim to develop mechanisms of reliable and uninterrupted energy supplies in order to resolve any emerging problems. Our relations with the EU in the area of energy security are based on the Southern Gas Corridor strategy. The signing by President Aliyev and President of the European Commission José Manuel Barroso of a Joint Declaration in Baku in January 2011 was a fundamental turning point in the implementation of this strategy.

We are confident that the successful implementation of the Southern Gas Corridor strategy will elevate relations between Azerbaijan and the EU, thus contributing to the energy security of Europe. At a time when energy supply routes are diversified and energy security issues in the region are closely intertwined, it is important to further promote the diversification of gas supply sources and routes to Europe and implement the agreements we have reached.

The initial stages of Azerbaijani gas exports are associated with Shah Deniz II. We are currently carrying the necessary preparatory work with our partners to start the full-field development of this $25-billion project. Gas production under Shah Deniz II is expected to reach at least 16 bcm per year.

Our long-term strategy also provides for the development of fields discovered in recent years, which have significantly expanded Azerbaijan’s oil and gas potential. These include Absheron, Umid, and Babak, as well as the gas reserves discovered in the deep horizons of the Azeri-Chirag-Guneshli (ACG) field. At present, the country’s recoverable gas reserves are estimated at 2.5 trillion cubic meters. The predicted gas potential is around 6 trillion cubic meters. If we add to this the recoverable and predicted oil reserves, it can be said that Azerbaijan has a total of around 10 billion tons of hydrocarbon resources. By 2025, Azerbaijan will be exporting at least 40 bcm-50 bcm of gas, and we believe that most of the gas will be exported to Europe.

Obviously, the transportation of such huge volumes of hydrocarbons from Azerbaijan to Europe requires the presence of safe and reliable oil and gas transit infrastructure that can increase throughput capacity whenever necessary. The Trans-Anatolian Pipeline (TANAP) will be one such system. The construction of this pipeline has been incorporated into the consolidated energy export plan of the country. The initial throughput capacity of this new Azerbaijani-Turkish pipeline will be 16 bcm. Of these, 6 bcm will meet the domestic needs of Turkey. There is a possibility that the capacity of the pipeline will be subsequently increased to 30 bcm. In the longer term, in addition to the gas produced from Azerbaijani fields, this pipeline will transport gas from other Caspian littoral countries through Azerbaijan and Turkey to Europe.

SOCAR has developed downstream capabilities with the purchase of Esso filling stations from ExxonMobil in 2013. Can we expect further international activity from SOCAR?

We have to expand our downstream business to the European market due to its proximity. In order to increase the profitability of our operations, we have to develop crude oil, refine it, and sell it on the retail market in order to enjoy the full benefit of oil production and supply. The Esso asset was on sale, we participated in the tender and successfully won. This marks our first foray into Western Europe. We do have other operations outside of Azerbaijan though. The first network of filling stations by us was in Romania, we also have a network in Ukraine and Georgia, and we will eventually expand to Turkey. Depending on the conditions, terms, and opportunities, further expansion cannot be ruled out.

How would you evaluate the current investment climate in the local energy sector?

There is a favorable environment for foreign companies to invest in Azerbaijan. There is legal and regulatory framework available to promote and protect foreign investment. Important agreements, including production-sharing agreements (PSAs), are ratified by parliament and signed into law by the President. To date, foreign companies have invested $50 billion in the country’s oil industry, and not a single energy agreement has been breached or amended.

We have ambitious plans for the near- and medium-term future. SOCAR and its foreign partners are continuing the construction of the largest shipyard in the Caspian region in Baku. The shipyard will launch its first ship in 2013. The commissioning of the shipyard will help renew the Caspian oil fleet specialized in large-scale exploration, drilling, construction, and repair operations, as well as provide companies in Azerbaijan and other countries of the region with modern tankers and ships. In addition to Azerbaijan, we are also implementing important oil refining and petrochemical projects in Turkey. In order to provide gas for the Petkim enterprise in Turkey, in which SOCAR owns a 61.32% share, we have built a new refinery there. In 2011, we started the expansion of a port in Turkey. Furthermore, the construction of a thermal power plant is expected to commence in Turkey in the near future. As a result of the construction and reconstruction operations we have carried out, Petkim will soon become one of the largest petrochemical centers and ports of the region.