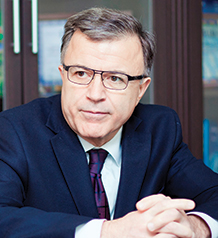 HE Huseyn Bagirov has been serving as the Minister of Ecology and Natural Resources in Azerbaijan since 2001. He has significant experience in the sphere of education, science, environmental management, and economics, as well as mountaineering. He has worked for both government and private organizations, and founded the Western University (WU) where he engaged in research and teaching activities. He has also served as a Fulbright professor at Indiana University in the US. He is the author of more than 50 books, monographs, brochures, and scientific articles, and is engaged with mountaineering and air sports, and headed the Air and Extreme Sports Federation of Azerbaijan (FAIREX). He has also led a number of Azerbaijani expeditions to Antarctica, Africa, and South America.

Share on:
TBY talks to HE Huseyn Bagirov, Minister of Ecology & Natural Resources, on the IDEA Campaign, averting natural disasters, and regional cooperation in the Caspian Sea region.

What have been the most prominent achievements for the Ministry over the past year?

Azerbaijan has made considerable progress in improving its environment over 2014 with significant changes made in the fields of biodiversity protection and forest development, as well as considerable increases and improvements in greenery areas, drinking water, and other spheres. The indicators for the protection and restoration of forests are improving steadily. The areas covered by forest have been expanded by more than 1 million ha, an increase from 11.4% to 11.8% of the country area. For nine months, reforestation and sourcing activities were carried out in an area of 2,300ha in which 3.2 million trees were planted. Another main focus of our activity is the conservation of biological diversity. As a result of this, the total area of specially protected natural territories has increased twofold and reached 10.3%. We have focused on the establishment of infrastructure for the protected natural territories, and in a short period of time the infrastructure model of Shahdagh National Park was established, while ecotourism camps were created at the Shirvan and Hirkan National Parks. Also, the second edition of the Red Book was published in two volumes, a project carried out on the basis of data collected with the assistance of relevant experts. Looking ahead, the restoration of biological resources of the Caspian Sea is one of our priority activities. A special sturgeon bank was created too, consisting of more than 5,000 sturgeon species at the Khilly hatchery. In 2014, for the first time in Azerbaijan, fry grown from caviar were raised with surgery operations without affecting the mother fish. Significant attention has also been paid to water treatment. Our program on “Providing Population with Environmentally Clean Water” covered a large area within a short timeframe and had an effective result. The production of water treatment plants was established in Azerbaijan using a technological scheme fully adapted to local conditions. In 2014, modular type water treatment plants produced in Azerbaijan were installed in five villages. At present, the works on installation of water treatment units are underway in 44 settlements, allowing over 500,000 people to have access to high-quality drinking water. Over the past ten years, the revenues of the State Environmental Protection Fund multiplied by more than 14 due to the efficiency of environmental protection activities, with revenues reaching AZN3.23 million in 2013. This figure increased by AZN1.54 million in 2014.

The IDEA Campaign was set up in 2013 to reintroduce gazelles to their once natural habitat in the Caucasus. How has this initiative developed so far?

The Project on the “protection, reintroduction, and restoration of historical habitats of gazelles in the Territory of Azerbaijan Republic” was continued with the support of the Heydar Aliyev Foundation and the IDEA campaign in 2014. In recent years, according to the initiative of the IDEA Campaign, the project was expanded into the Caucasus region. Recently, 10 gazelles were reintroduced to Georgia with the participation of IDEA representatives as well as the Environment Ministers of Azerbaijan and Georgia. In August 2014, 10 more gazelles were released to the territories of Ajinohur-Samukh of Azerbaijan, and up to 150 gazelles have been reintroduced to their historical habitats within the framework of this project.

There has been some concern over the potential for landslides in certain parts of Azerbaijan. What work has been carried out by the Ministry in 2014 to protect against natural disasters such as this?

Some 221 landslide zones were registered in Azerbaijan, and relevant geological studies were carried out in 52 landslide areas where this activity has been noticed. Exogenous geological processes in Azerbaijan have been developed according to the degree of a hazard zoning map with a scale of 1:500,000. Also, 1: 5,000 scale maps of 14 dangerous landslide territories in the Absheron Peninsula were designed, and the design of 1:5,000 scale topographic maps of 38 active landslide areas in Azerbaijan (with the exception of the Absheron Peninsula) are at the stage of completion. Monthly bulletins on the current state of landslides are prepared and delivered to the relevant authorities. In addition to this, complex geological, engineering, topographic, and geophysical surveys were carried out on the shore of the Mingechevir reservoir and Zigh sliding area of Surakhani district.

How does the Ministry work with government institutions in the region to ensure the protection of the regional environment including the Caspian Sea?

Pentalateral intergovernmental agreements were signed within the framework of the Fourth Summit of the Heads of the Caspian littoral states. The list of agreements included cooperation in the field of Caspian Sea Hydrometeorology, the field of prevention and elimination of emergency situations in the Caspian Sea, as well as the rational use of aquatic biological resources of the Caspian Sea. Over the past decade, Azerbaijan has successfully cooperated with Caspian countries with a view to addressing trans-boundary environmental issues of the Caspian Sea. These activities are carried out within the framework of the implementation of the Tehran Convention and its Protocols. In the course of the fifth Conference of the Parties (COP5) to the Framework Convention for the Protection of the Marine Environment of the Caspian Sea held in Turkmenistan in May 2014, the Protocol on Biodiversity was adopted by the contracting parties. The Protocol on Biodiversity will further contribute to the conservation and restoration of the unique Caspian habitats and flagship species, such as sturgeon and the Caspian seal. This is the third in a series of protocols. The first two were concluded and signed in 2011 and 2012, underlining the countries’ commitment to cooperating and taking action against the environmental threats facing the Caspian Sea. The Aktau Protocol focused on regional cooperation in addressing oil spills, and the Moscow Protocol on the protection of the Caspian Sea against land-based sources of pollution. Azerbaijan has undertaken several activities in safeguarding environmental protection and ensuring a sustainable future for the Caspian Sea. Furthermore, at the COP5, the Ministry of Environment and Natural Resources also agreed to locate the Secretariat of the Convention under the administration of the UN Environment Programme (UNEP) in the territory of the Caspian littoral states on a four year rotation basis. Azerbaijan will be the first host country and the Secretariat will be based in Baku starting from 2015. In addition, it was decided that the next meeting of the sixth Conference of the Parties (COP6) Tehran Convention will be in conjunction with the inauguration of the Convention Secretariat and held in Baku in 2015.

What sort of initiatives are being put in place to continue the planting of trees and develop Azerbaijan’s natural landscape?

The restoration of landscapes and greenery works are being continued to protect highways from wind and water erosion. Over the past five years, large-scale tree planting projects were implemented using modern methods. Baku and the Absheron peninsula are arid areas. We planted 4.42 million trees in 3,613 ha. More than 1.2 million olive seedlings were planted on an area of 2,100ha.