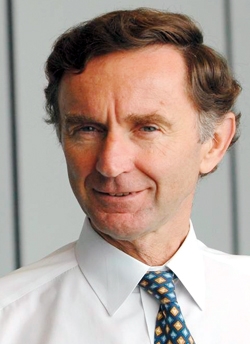 Lord Green began his career with the Ministry of Overseas Development. In 1977, he joined management consultants McKinsey & Co Inc, with whom he undertook assignments in Europe, North America, and the Middle East. He joined HSBC in 1982 with responsibility for corporate planning activities and in 1985 was put in charge of the development of the bank’s global treasury operations. In 1992, he became Group Treasurer of HSBC Holdings and in 1998 he became Executive Director of the same bank. His is currently Minister of UK Trade and Investment.

Share on:
What is the significance of Colombia to UK business? British exports of goods and services to Colombia in 2011 were worth £698 million, following an average increase over two years […]

What is the significance of Colombia to UK business?

British exports of goods and services to Colombia in 2011 were worth £698 million, following an average increase over two years of more than 60%. Services in particular have grown rapidly and now represent more than half of that figure. In 2012, for the first time, Colombia overtook Argentina as an export market. While this is good progress, Colombia remains a market where we could be doing more. Countries such as South Africa or Thailand generate a lot more exports despite being only slightly larger economies.

Colombia is the UK’s fifth largest export market in South America. How do you assess the British-Colombian commercial relationship?

Data from the UK Office of National Statistics (ONS) shows that in 2011 Colombia moved just ahead of Argentina to fourth in the region. More importantly, it is a relationship that has grown rapidly, more than doubling within two years. While this is positive, there is still much more to do and Colombia offers opportunities in a wide range of sectors where the UK has expertise, for example infrastructure and education.

What is the level of integration of British companies in Colombia?

The UK is the second largest investor in Colombia after the US. These investments are concentrated in beverages (in particular SABMiller’s purchase of Bavaria in 2005), mining, and the insurance sector. However, we have seen increasing diversification of British investment, one example being the arrival of Mothercare in 2011.

Which key trade trends and potential areas for investment can you identify for UK companies in Colombia?

We expect trade to continue to grow, with the fastest growth likely to be in services. Infrastructure offers the greatest prize with large investments expected from the government in transport and social infrastructure—estimated to be up to $100 billion. This offers significant opportunities for UK engineering, project management and advisory firms. The UK’s experience in public-private partnerships (PPPs), with 20 years of accumulated knowledge, is of particular interest to the Colombians. But there are opportunities elsewhere, including the nascent offshore oil sector, the security technology sector and traditional UK strengths in education and design.

What makes Colombia an attractive partner for British businesses?

Colombia has been consistently recognized as a top reformer by the World Bank in terms of improving its business environment. It now ranks, alongside Chile and Peru, as the best environment in the region. The economic regime is liberal, and following the forthcoming free trade agreement (FTA) with the EU, will improve further. Colombia offers both ease of doing business, continued strong growth, and political stability.

What will be the impact of the forthcoming FTA between Colombia and the EU, and what are its main challenges?

The FTA will support UK exports in key sectors through lower tariffs and tackling non-tariff barriers. The spirits sector in particular—where whisky is a major UK export—will see significant improvements in the operating environment. The FTA does not pose significant economic challenges as the product mix of the EU and Colombia are broadly complementary. The FTA also contains a human-rights clause and the European Parliament has requested Colombia to provide an action plan for tackling human-rights issues, to ensure that the FTA is a force for the protection and promotion of human rights in Colombia.

What is your outlook for Colombia’s economy and for UK-Colombian trade levels in the medium term?

We set a goal to double two-way trade from the 2009 level by 2015. We are already almost there. I would expect UK exports to exceed the £1 billion mark by that stage. Colombia offers long-term growth and a population of 44 million that will be increasingly drawn into the formal economy. And with the recent announcement of a peace process to seek a end to the prolonged internal conflict, we have further reason for optimism.